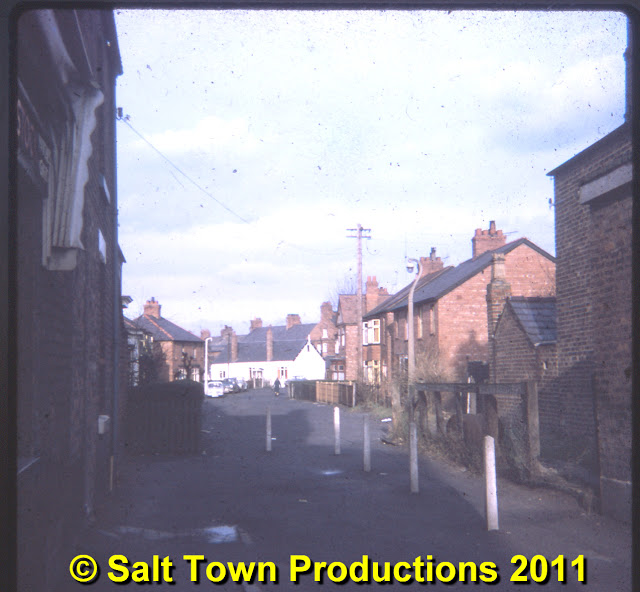 One of those street scenes in which nothing really seems to have changed much but which, on closer examination, has altered considerably. In 1969 Lawrence Avenue was one entity - an unadopted road linking Wheelock Street with Webbs Lane. The coming of  St Michael's Way in the early 70s cut the Avenue in half and necessitated the demolition of several properties, including the white building in the middle of the picture, and a huge wooden fence cordoning it off from the new dual carriageway. The buildings in the foreground of our 1969 shot are now part of Lawrence Avenue West and those beyond St Michael's Way constitute Lawrence Avenue East. Note the elegant swan necked concrete street lamp. This was still in existence in 2011 and a similar specimen once graced Seabank.*
The building on the extreme left is now Brooks & Bostock Jewellers Shop, a block of new garages has been built on the right, and there have been various other changes on the Lawrence Avenue scene.
Nowadays, for many people, the words 'Lawrence Avenue' mean only one thing - a trip to the dentist. I'm one of them and I'll take the opportunity of my next check up to procure a modern day version of the scene for a 'Then & Now' feature.


Charles Frederick Lawrence was born in 1873 and was, from a very early age, interested in the history of Middlewich. After being employed at several local firms he became clerk to the Urban District Council in 1904. He retired in 1938 and died in 1940.
Among his written works  are 'A History Of  Middlewich' (1895), 'The Annals of Middlewich' (1912) and 'Middlewich Doings In Olden Days (1925). He also wrote  poetry, including anthologies of patriotic verse published by the UDC and sent out to  the trenches during World War I.

'CFL' was a pioneer in Middlewich local history, and one of the inspirations for the Middlewich Heritage Society in the 1980s.
(acknowledgments to Alan Earl for some of this information. A fuller biography of C. F. Lawrence appears on page 55 of 'Middlewich 1900-1950')

Geraldine Williams It always used to be called 'Lawrence Gardens'. When did it get the 'Avenue' status?

Dave Roberts A very good point. And I thought for a moment I'd made one of those embarrassing slip-ups which occur when I rely on my memory. But no - it is definitely called Lawrence Avenue East & West. Was I making an assumption, too, when I said that the road was named after C F Lawrence? According to Wikipedia it was CFL himself who made archaeological discoveries 'in Lawrence Gardens', so the name must pre-date him. These are deep waters, and I sense another epic struggle to get to the bottom of things.
‎...still, we did it with Sharon's cafe, didn't we?
Here's one clue: When the road was sliced in half and the Wheelock Street end became 'Lawrence Avenue West', the word 'West' was added on a separate sign, so it must have been an 'Avenue' prior to the early 70s, if you get my drift.

Geraldine Williams Charles Frederick and his wife Kitty's house was actually off Lawrence Gardens, and had a large orchard. If you come in from the Webb's (who were they???!!!) Lane end there's a big house on the right where the Bennion family lived and a bungalow built sideways on (I don't know if it's still there) and this path led on to the Lawrence house. I can just about remember Kitty. She was a St Mary's parishioner.
According to a Google site, Charles Frederick and two other brothers, Augustine and Thomas, were the sons of John Lawrence and his second wife Hannah. John, a joiner/builder lived in Wheelock Street but the 1901 Census shows him being retired and having moved to Lawrence Gardens. Perhaps he built the house there and Charles Frederick eventually inherited the family home.