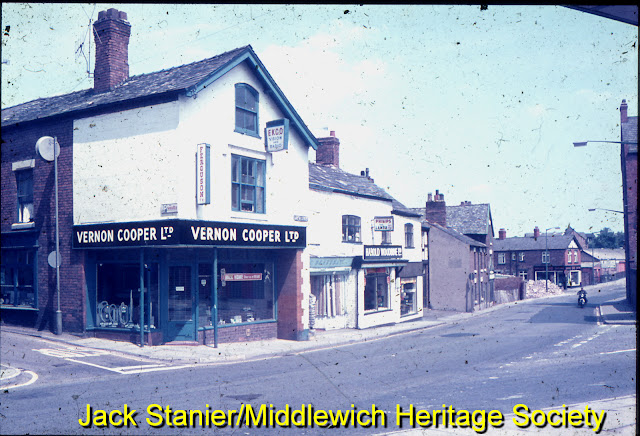 Another excellent shot from the camera of Jack Stanier and a companion shot to the one shown here. It's 1970 (as evidenced by the 'Back Home' World Cup poster in Vernon Coopers window). To the right of Vernon Coopers is Stanways fish shop with its lettering removed but the name just about still visible. Adjoining this we can get a better view of an establishment we've mentioned a few times before - Harold Woodbine Ltd in its original Lower Street premises. It's obvious from the configuration of this shop that it was once  separate premises; probably two or three small cottages. Note that while Vernon Cooper promotes the virtues of Ferguson and Ekco sound and vision, Harold Woodbine favours Philips.

Here's a little reminiscence from me about Harold Woodbine's which featured in an earlier posting:

I still remember the excitement when I called in to order a record album in 1963
(actually, we didn't call them 'albums', we called them L.P.s)
The record seemed to take weeks and weeks to arrive but when it did, I played it
until the grooves were white with wear. It was 'With The Beatles'
(the mono pressing, of course). A year earlier my eldest brother, Glynn,
had brought home 'Love Me Do'. The perfect ending to this story would be
for me to say that I thought this early 'waxing' was great, but I didn't.
I thought it was boring. By the following year I'd obviously changed my
mind about this Liverpool beat combo. (original comment from Facebook)

Moving to the extreme right of the picture we can see the very edge of the Town Hall complex of buildings and, to the left of that, the JayGee Fireplace building which is now  Town Bridge Estate Agents. Left of this is the North-Western Gas Board showroom and, to the left of that, the first signs of demolition along the row as the showroom manager's house is reduced to rubble.
To take this picture Jack stood outside what is now Pineland*. If we were to take a picture from this viewpoint today we'd see mostly dual carriageway with the Bullring bus interchange to the right of it. (see 'Now & Then: The Bullring . Link below).
There are a few interesting little details about Vernon Coopers shop which will replay a bit of clicking and double clicking: First of all, above the 'Ltd' on the left hand side is a small sign directing people down Pepper Street to The Vaults and its car park. Secondly, what might appear at first to be a satellite dish on the left hand wall is, in fact, a STOP sign for the Pepper Street/Lower Street junction, placed at this height to make it visible from further down Pepper Street.
And if you look to the left hand side of the building's tall chimney, there is a fine array of vintage VHF TV aerials. The giant X is for band one, BBC 1 on channel 2 and the other, classic 'ITV' aerial is for band three, Granada Television on channel 9. Incidentally, if you should happen to have a surviving ITV aerial on your roof, you could use it for receiving DAB radio, as the aerials are exactly the same. Somewhere, by this time, there must also have been one or more modern  aerials for 625 lines UHF (with colour on all three channels).

Ian Hill-Smith What's the road leading out of the right of the pic, Dave?

Dave Roberts Hi Ian. The road in the right foreground is Hightown which is still more or less in the same position, although the traffic flow now runs in the other direction - i.e. towards Lewin Street, The road leading off into the distance (and the Town Bridge) is now the bus lay-by and part of St Michael's Way.