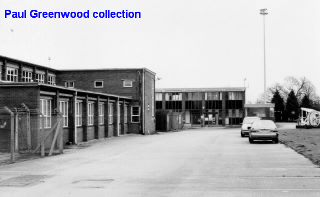 In our journey around Middlewich and district over the last seven months  it's been difficult to avoid over use of the phrase 'end of an era'.
Well, here's the first of a series of photographs by local photographer Paul Greenwood which was taken at the start of 2011, just in time to catch the end of what must be considered another of those 'eras', the era of chemical production on most of  the Brenntag site.
Some people will remember it as the  Hays Chemicals or Albion Chemicals site, and before that as BP Chemicals, but it was, and is, known universally by Middlewich people, whatever its official name, as 'Murgy's'.
The Murgatroyd's site was officially in Elworth but a lot of people from Middlewich worked there, and for many years  the site depended for its brine supplies on the  pump in Brooks Lane, Middlewich, which once supplied brine to the company's nearby  open pan works, a flow being sent down the 'brine line' which ran, and still runs, alongside the Sandbach-Middlewich-Northwich railway.
The Brooks Lane brine pump itself is, as we have already seen, the subject of a preservation project spearheaded locally by Middlewich Town Council's Heritage Officer, Kerry Fletcher.

The story of the Murgatroyd's site is too complicated to relate here, but you can read all about it in this Catalyst PDF document which reproduces a publication written by George Twigg, formerly of the Salt Museum:

CATALYST - THE STORY OF MURGATROYDS

Talking of brine pumps, if you look carefully at the extreme right of Paul Greenwood's photo of the site's main office block, you can see another one which was on display at the entrance to the works up until its closure.
This pump has been placed in safe storage and there are plans to put it on display in Middlewich.
We believe that the electrical windings inside the pump were removed a while ago to deter copper wire thieves who also, until security was increased, caused havoc to the signalling on the nearby railway.
Brenntag still have a presence at the Middlewich end of the old Murgy's site where a combined heat and power station has been built, but most of the site is derelict and awaiting the inevitable housing estates to come.
At the Sandbach end of the site is Yew Tree Farm which still retains some beautiful old buildings and the remains of the old Murgatroyd's Social Club.
Incidentally, the rail link which once connected Murgatroyd's Works to the Middlewich branch line is still in place, although the sidings which lay alongside the works have been lifted. This link is fully signalled and just waiting for some enterprising firm to make use of it.
I have to declare an interest in Murgy's as my Uncle Dennis and Auntie Edie both worked there.
Update: Inexplicably, when I originally wrote this I neglected to give Dennis and Edie's surname which, I'm sure, will strike a chord with many. It's Broster.
Auntie Edie worked in the canteen. I'm not sure what, precisely, Uncle Dennis did.
But I do know that on one historic day in the 1960s he took his camera, loaded with colour slide film, to work and photographed the last steam hauled train to leave the site.
Now, I'd dearly love to lay my hands on those slides....
More from Paul's collection to come on 'A Middlewich Diary' in 2012.


Daniel Preston I remember Murgy's, of course. Over the turnover bridge, along by Murgy's and into the esses. One winter's day, 1967 (as far as I can recall) going to work, Foden's, on my motorbike I hit an icy patch in the esses. The back wheel started to drift, first one way, then the other; the bike weaving all over the place while I hung onto it. I thought I would surely come a cropper. Meanwhile, while I'm doing all I can to stay on two wheels, a motorist behind me is blaring away on his horn, as if to say, "Stop clownin' around, the public road is not the place to be stunting." Just as if I had any choice in the matter.


Erika Nicholson I work for a water company and we use Brenntag as a supplier.

Dave Roberts Hi Erika. Do you know what's on the Brenntag site at Elworth now? We know that part of it is a power station, but there seems to be more apparatus there than would be necessary just for a CPH station.

Erika Nicholson The Elworth site is where we order from, so I assume they are in production of chemicals, although they mainly come from a site at Lutterworth. Elworth, I think is mainly offices, although they may produce some onsite.