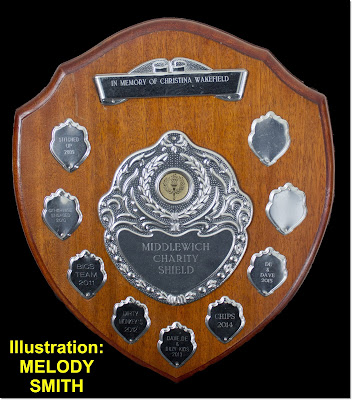 Always the very first Middlewich Event of every year, the Annual Middlewich New Year's Day Treasure Hunt is competed for come rain or shine by hung-over Middlewichians, and the prize, since 1992 at least,  has been  the much-coveted Middlewich Charity Shield.

In 2017 Melody Smith  volunteered - for one year only - to set the questions for the  Treasure Hunt.

During the time she spent organising the 2017 event, Melody managed to put together a brief history of the event, which can be found by scrolling down the page.

We're still interested to find out more about the history of the Middlewich Treasure Hunt.

The earliest date on the shield, which is  dedicated to the memory of Christina Wakefield, is 1992 when, as can be seen from the list of winners below, 'R&P Jackson' were the victors.

But did this epic New Year trawl around the town actually start before 1992?

The Middlewich Diary would love to hear more of the history of this cherished Middlewich Institution.

If you can help, please email us at:

The term 'usual suspects' springs to mind, with names like 'Poniznik + Bruce, 'S Bailey & T Hough' , 'Bic's Team', 'The Shaws', 'Stitched Up' and many others making up a virtual 'Who's Who' of the Great and Good in Middlewich.

If you were a member of one of these illustrious teams and have memories - happy or otherwise - of taking part in the Treasure Hunt, please don't hesitate to get in touch.


HISTORY OF THE EVENT

The New Year's Day Treasure Hunt, with its prize, the Middlewich Charity Shield, was started in 1992 by Terry and Christina Wakefield, who used to run a disco and catering company  and were actively raising funds for local causes and charities in Middlewich.

Tragically, in 1993, a year which proved to be very difficult for Terry and his family, Christine had a fatal fall in her home.

As a mark of respect, and a reflection of her work in the community, Terry dedicated the recently established shield to Christina's memory.

He continued to run the treasure hunt until 1998 when he left Middlewich and moved to the Wirral to enjoy a new life with his current wife.

I recently spoke to Terry by telephone, and he was very pleased to hear that the tradition has stayed strong in Middlewich and that the annual event has continued to be an institution within the community.

He still has links here and visits occasionally.

His daughter has requested that, when the shield is full and needs replacing, she would like to keep it.


FURTHER DETAILS OF THE 2018 COMPETITION CAN BE FOUND ON OUR