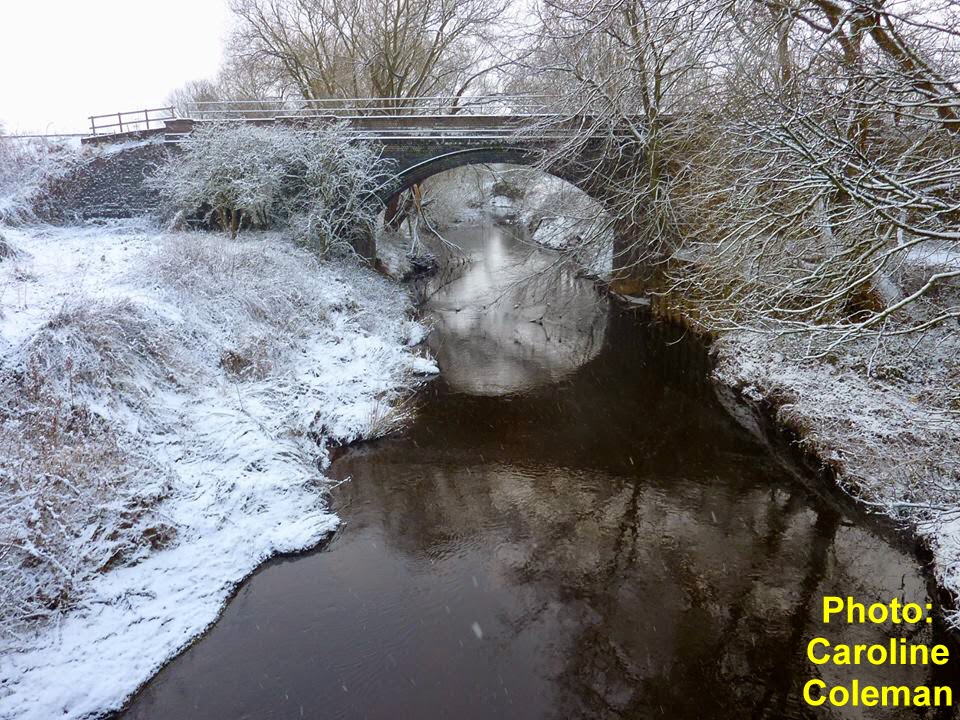 Here's an interesting and unusual photo to take us into the New Year. It shows the point just North of Middlewich where the Sandbach-Middlewich-Northwich branch line crosses the River Dane, a few yards west of King Street. A public footpath runs from King Street along the left hand side of the river and skirts around the bottom of Harbutt's Field to follow the course of the River Croco to the Big Lock, where it crosses the Croco and the T&M canal via two footbridges.
A few yards beyond this railway bridge  the River Croco, after being channelled alongside the Trent & Mersey Canal to serve as an overflow all the way from Brooks Lane locks, comes in from the left to join the Dane, which then flows on, meandering through pleasant meadowland, until it is joined by the River Wheelock at a point just West of the Croxton Lane tip. The Dane then continues on its journey across the Cheshire countryside until it finally flows into the River Weaver in the centre of Northwich. These rivers and the places they meet can all be traced on Google Earth, but if you're not too familiar with the area, their courses are a little difficult to discern because of the trees which crowd their banks and make them, in places, practically invisible.
If you're wondering why we've decided to dignify what looks like a relatively modest railway arch with the title 'viaduct', it's because the bridge actually has three arches - the main one which accommodates the River Dane and two smaller ones on either side. Both these smaller arches are hidden by trees in  Caroline's picture.  The archway on the left is used by the footpath which runs from King Street to the Big Lock and the one on the right gives access to the ex-ICI reservoir on the banks of the Dane via a short roadway. 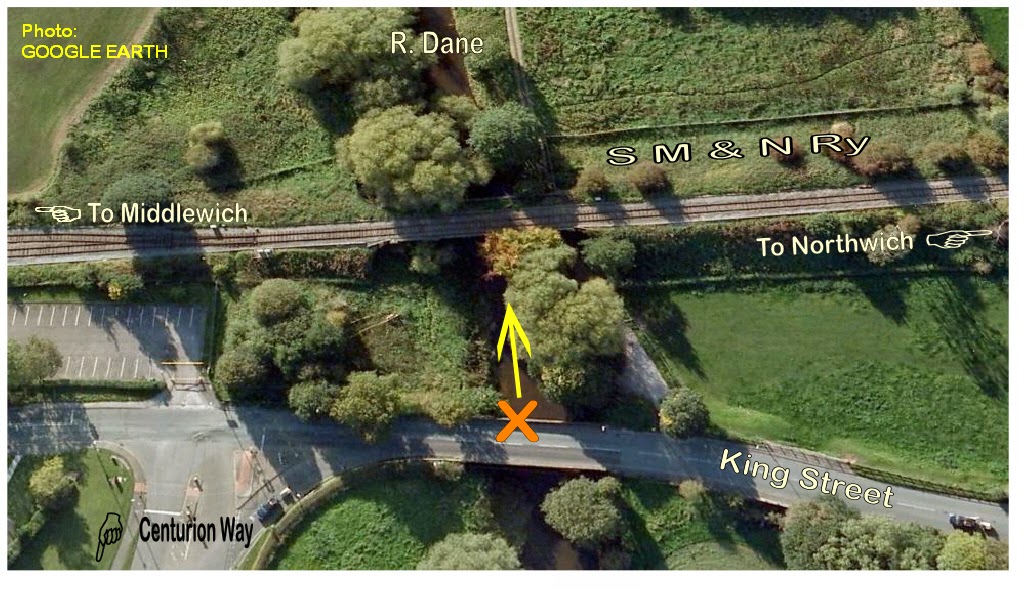 To make things a little clearer, here's a view borrowed from Google Earth and taken in much sunnier times. X marks the approximate spot where Caroline was standing to take her picture, and the big yellow arrow shows the direction in which she was facing.
You will note that at the bottom of the picture we have appended a hand symbol pointing towards Centurion Way which, according to all the maps we have, only extends as far as the roundabout - the rest of the road to King Street being un-named. Can anyone tell us if Centurion Way actually extends as far as the King Street junction?
In the 1960s this area was a playground for local children. Beyond the bridge, and opposite ICI's reservoir, were rope swings and many hiding places among the lush vegetation which grew all around the area in the Summer. In the other direction, towards Byley, was the chosen swimming place for local families, despite attempts by local farmers to discourage the practice. Many a pleasant Sunday Summer afternoon was spent 'down the river'. Many thanks to Caroline for permission to use her excellent photo.