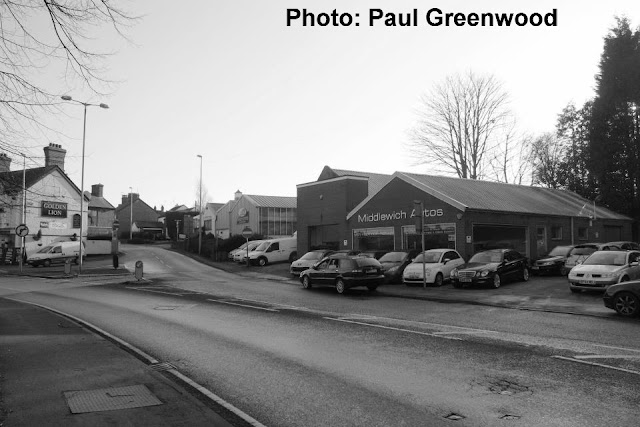 by Dave Roberts
Paul Greenwood has been out with his camera to capture some aspects of the present day Middlewich scene for posterity, for the very good reason that some parts of it are, by all accounts, due to disappear soon.
We're saying 'by all account﻿s' because it appears that matters are by no means settled.
This picture shows Chester Road as it was in mid-January 2012, with Boosey's Garden Centre and Middlewich Autos in what should be their last few weeks before demolition to make way for a new Morrison's supermarket.
According to the local press work should begin on this in March, so it should naturally follow that the removal of these buildings is imminent.
However, other sources are saying that Morrison's, despite having obtained planning permission for their new store, are 'not yet committed' to building it (see 'UPDATE', below).
The theory is that uncertainty over plans by Tesco to rebuild, and greatly enlarge, their premises in Southway are causing Morrison's to delay a decision on actually going ahead with their plans.
Can a town of this size support two major supermarkets?
If they're both built, will people travel here from out of town to shop?
What will be the effect of these developments on the shops in Wheelock Street?
Opinion is divided on this. Some say that two large supermarkets (or even one greatly enlarged one) will kill off trade in the main street.
Others, on the other hand, are saying that the increased number of shoppers in the town will give a boost to Wheelock Street trade, as people will stay in town and buy all the things they can't buy in the supermarkets from the Wheelock Street shops.
Whatever happens, this may be a momentous year for Middlewich and large parts of the town may change forever.
Which is why, to return to the real point of this Middlewich Diary entry, Paul has gone out and about to record the 2012 Middlewich scene.
Middlewich Autos has been in business in Chester Road for over thirty years, replacing a firm with the pleasing name of Middlewich Motors (shame they couldn't keep the name).

MIDDLEWICH AUTOS WEBSITE
﻿
Boosey's Nurseries, of course, is much older and pre-dates even the arrival of the Boosey family in Middlewich in the mid-nineteenth century.
William Boosey was an Essex gardener who came here in the late 1850s and took over an existing nursery business.


According to Allan Earl in Middlewich 1900-1950 (Cheshire Country Publishing 1994) Boosey leased land in Holmes Chapel Road, Webbs Lane and Pepper Street as well as in Chester Road and Holmes Chapel.
Allan also makes an interesting point which has a bearing on this entry in the Middlewich Diary:

...' The area of woodland along the Wheelock Valley which can be seen from Coal Pit Lane and Chester Road is overgrown nursery stock which was never cleared after the 1914-18 war, partly because of the fall off in trade in the late twenties and thirties, but also because the land falls away quickly to the river and was therefore unsuitable for agricultural machinery.'

So that great profusion of trees along the river, which I had assumed to be a fairly recent phenomenon, is actually much older than I thought, and now we know why it's there.
Right up until the 1950s and 1960s Boosey's nurseries owned a lot of land in the Nantwich Road area, where Glastonbury Drive and associated developments now lie.
The extent of the nurseries even in those days can be appreciated when you consider that the driveway which runs alongside the fine old Victorian house just where Nantwich Road makes a sharp bend to run down towards the aqueduct, once led into the nursery fields.
And if you stand in the car park of the present day Boosey's premises (while you still have the chance) and look in the direction of Glastonbury Drive you can imagine how things used to be, with many acres of land given over to the cultivation of all kinds of flowers, plants, trees and shrubs.
The change of name from Boosey's Nurseries to Boosey's Garden Centre gives an indication of how the  business has changed.

UPDATE: September 25th 2014. In actual fact the name didn't change, as we had assumed. Boosey's Nurseries and Boosey's Garden Centre were separate businesses and continued for a time on different parts of the site (see comment below). We're glad to correct this misunderstanding and also to know that the original Boosey's Nurseries business is still thriving in Antrobus. Many thanks to our anonymous contributor for putting us right on this point -Ed

The coffee shop mentioned is run by Helen Ireland and is one of the town's 'hidden gems': 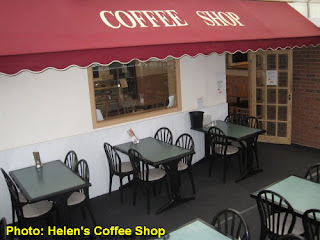 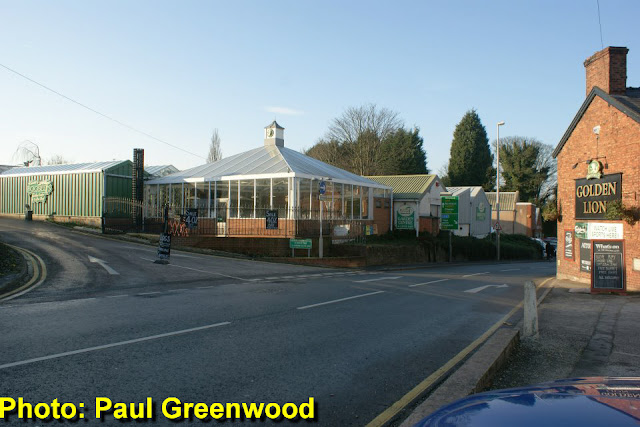 Boosey's Garden Centre would probably never win any architectural awards, but the buildings are attractive enough and it is an amenity which will be greatly missed when, as seems likely, it disappears (sooner or later) from the Middlewich scene.
Our advice is to enjoy it while you can.
Many thanks to Paul Greenwood for the photographs.
Will he be able to return in January 2013 and take more photographs of Boosey's and Middlewich Autos?
Or will a new era for shopping in Middlewich, for better or worse, have begun by then?

UPDATE: At the end of February 2012 it was announced that Morrisons' planned to start work on the site in May, and were still aiming to be open for business at Christmas 2012.
Meanwhile Tesco's original plans were also expected to be passed by Cheshire East's planning department on the 29th February.
Update: This, of course, never actually happened as Tesco withdrew its plans at the last minute.

Andrew Tomlinson with living in Croxton Lane for many years and being friendly with the Morrises I have many memories of this site. I will have to sit down and thumb through some old photos to see what I can find/remember. I do remember the garage being a petrol; station as well as car sales/repairs - owned and run by Bob Williams?

Boosey's Garden Centre finally closed its doors on the 26th April 2012. Click here for our valedictory tour of the premises

Originally published 20th January 2012
Re-published 25th September 2014 following the receipt of the comment below telling us that Boosey's Nurseries lives on not too far away in Antrobus.