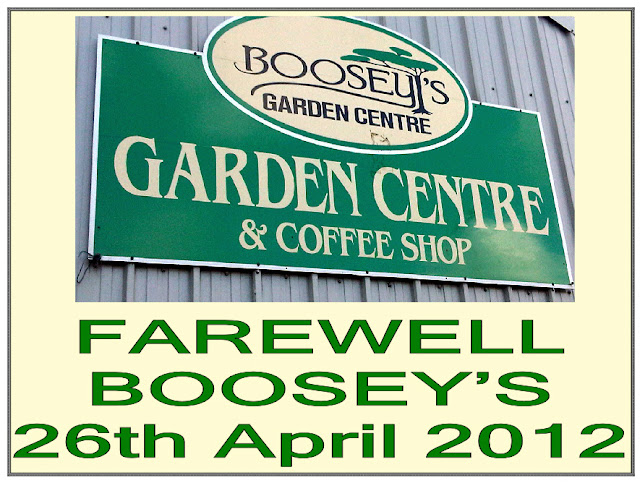 Thursday 26th April 2012 is the day that Middlewich finally bade farewell to another local institution, Boosey's Garden Centre.
Here we take a final nostalgic look round. 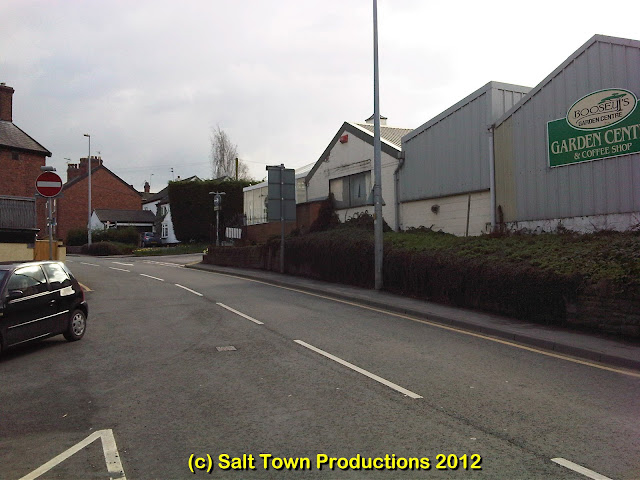 It's hard to believe that this familiar sight will very soon be a thing of the past. The somewhat haphazard-looking jumble of buildings on Newton Bank which was home to Boosey's will soon disappear to make way for a Morrison's Supermarket. 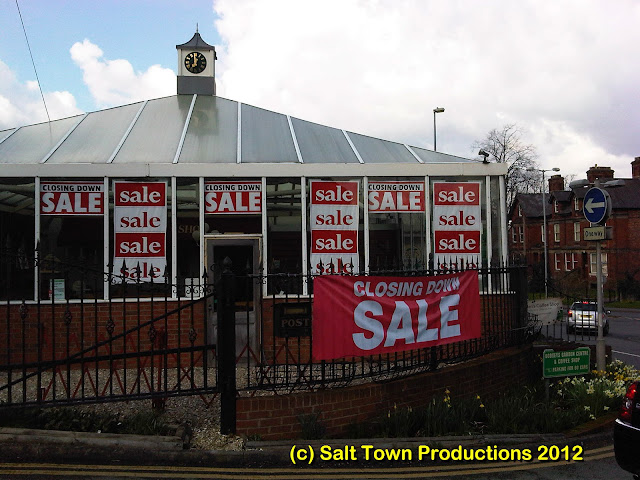 At the beginning of the year Boosey's  conducted a closing down sale which intensified during the garden centre's last week of operation with reductions of 'up to 75%'. Note the public clock on top of the building. Morrison's are usually quite good at clocks. Will there be a replacement one on top of the new store? 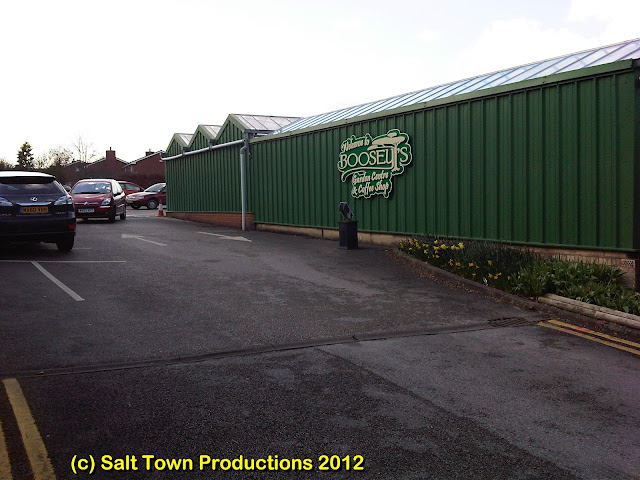 Here's the road access to the garden centre off Newton Bank. Behind the cars on the left is the car park and, beyond that is Glastonbury Drive, built on the fields which were once part of Boosey's Nurseries. 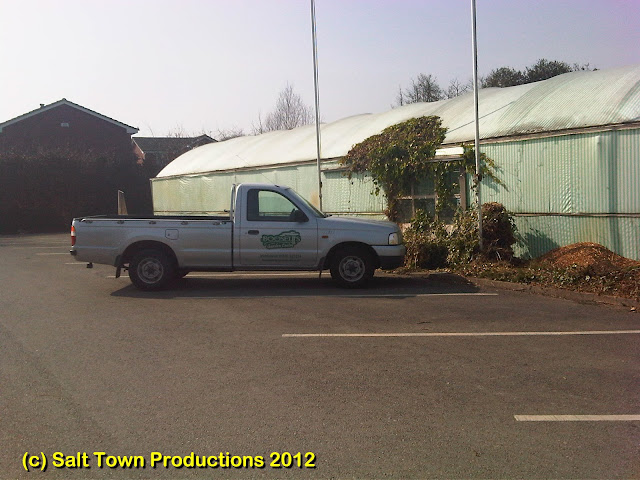 Another familiar sight around the town - Boosey's pick up truck. The houses on the left are in Glastonbury Drive. 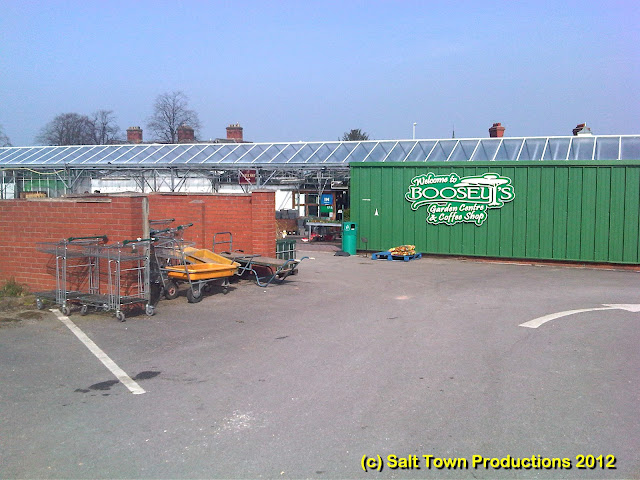 The entrance to the garden centre is in the middle of the picture, just to the left of the green wall . 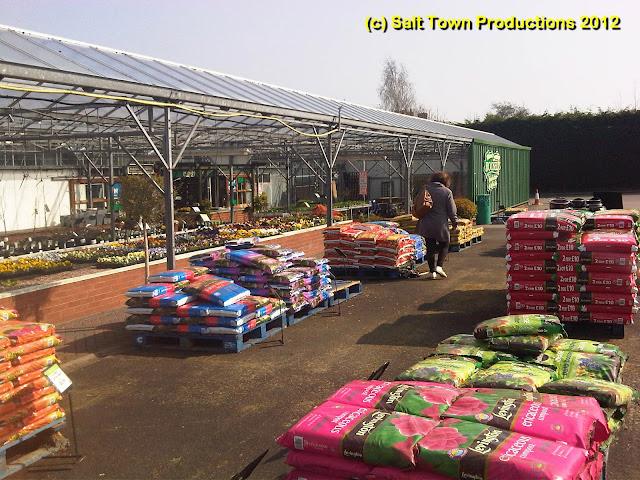 In this shot that green wall is in the right background. Bags of specialised compost are on offer in the yard. 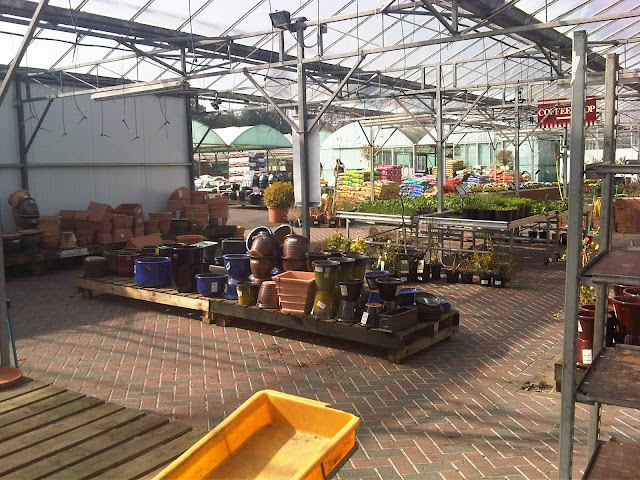 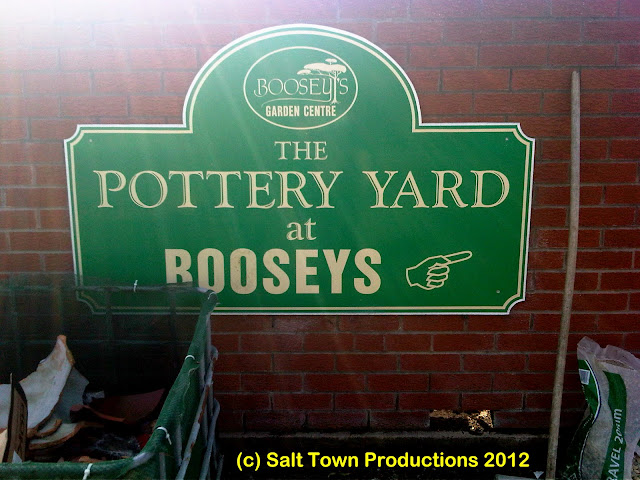 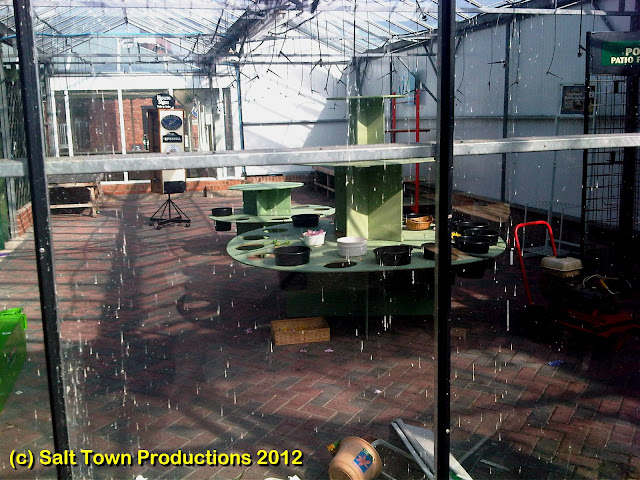 Taking a look inside, there's not a lot to see in this part of the building. 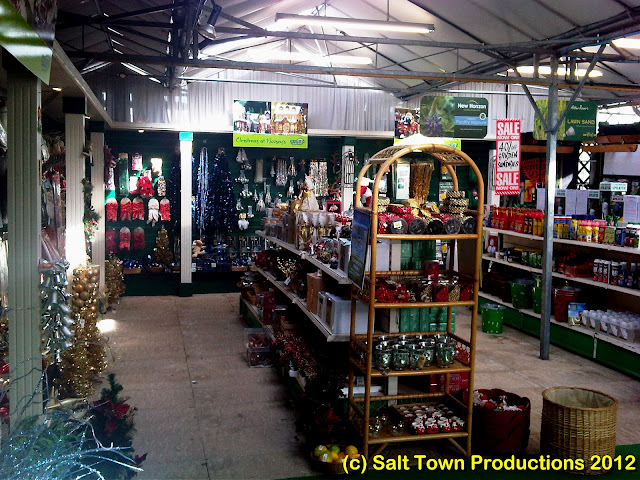 ...but here there's a chance to stock up on Christmas items.
Boosey's was famous for its Christmas displays, but is this a leftover from Christmas 2011, or a foretaste of Christmas 2012? 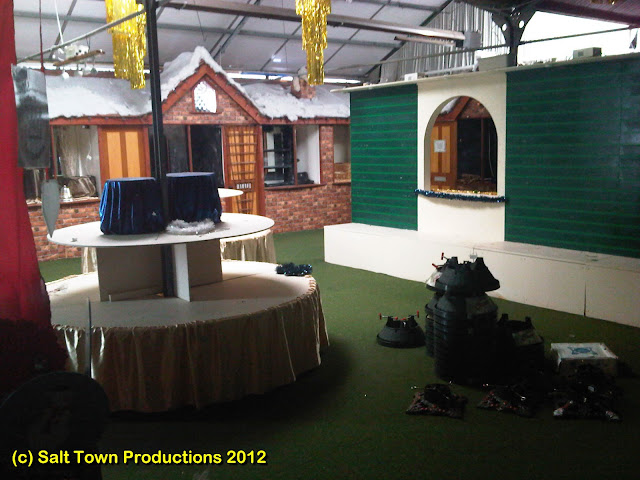 Moving further inside the building, a note of melancholy starts to creep in. The artificial snow lies atop the display cabinets, but never again will we take our children and grandchildren along to see the tinsel, glitter and fairy lights at Boosey's in the weeks before Christmas... 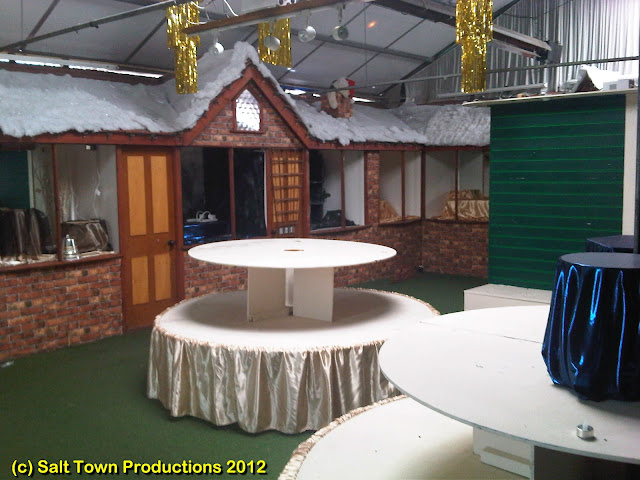 ...it's all rather reminiscent of a theatre after the final show has ended. Delving just a little further into the building, we chance upon these harbingers of Christmas 2012... 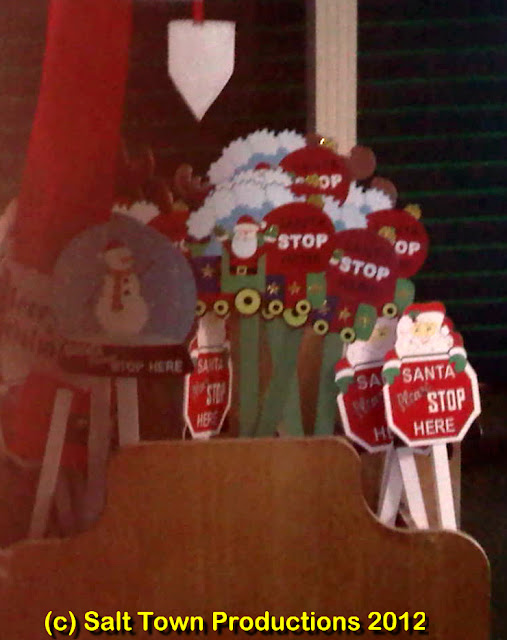 ...but this is one place Santa won't be stopping this Christmas. Just a short distance away we come across probably the saddest sight of all... 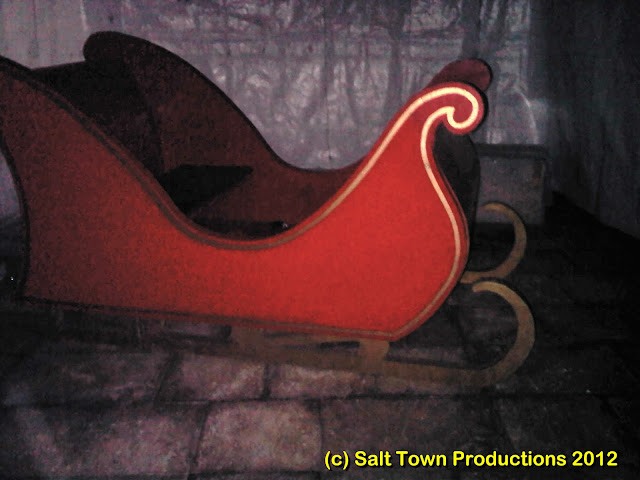 ...Santa seems to have left his sleigh behind as a reminder of all those Christmases past at Boosey's. Of course Santa will be in Middlewich at Christmas this year, as, no doubt, will his reindeer (a Middlewich tradition started by Boosey's many years ago) but not in this particular part of town (unless the manager of the new Morrison's store has a particular genius for local PR?) so let's hope he's made arrangements to get his sleigh back. 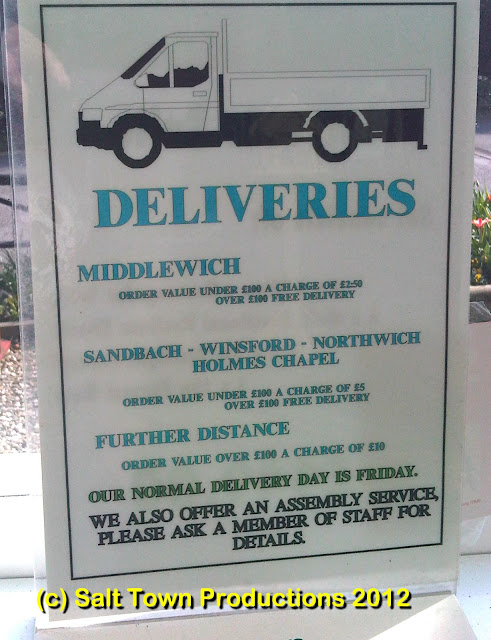 Perhaps he's not too late to take advantage of Boosey's delivery service? 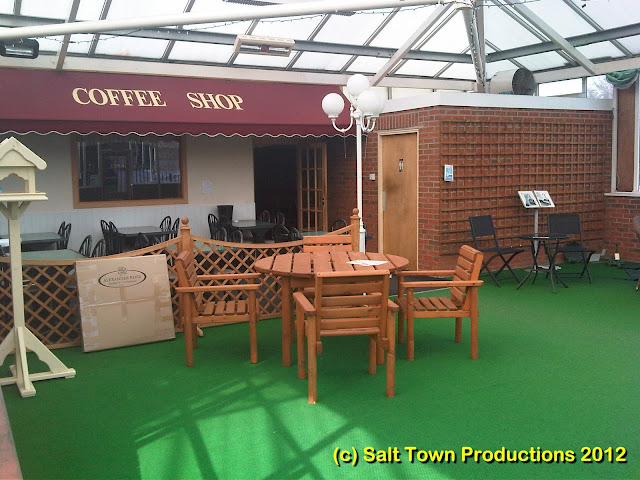 One very popular feature of Boosey's Garden Centre was the coffee shop. A very pleasant spot for a snack and a drink. This particular photo is labelled 'coffee shop exterior' but, in fact, the coffee shop was inside the garden centre, giving patrons the pleasing option of being able to sit 'outside' whatever the weather. 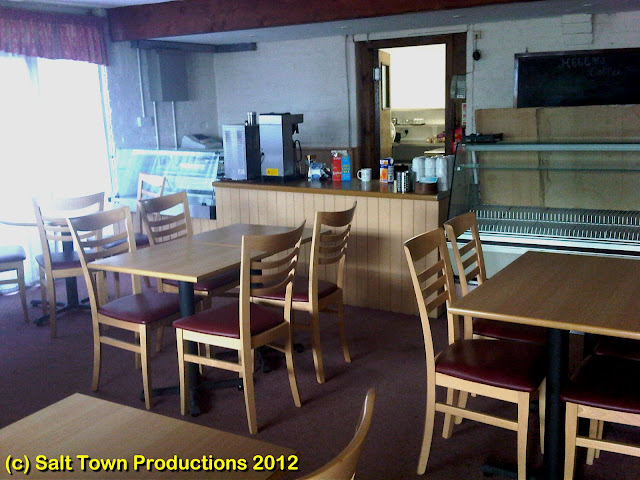 The 'inside' part of the coffee shop was just as attractive, but this photo has an almost eerie 'Marie Celeste' feel to it now that the customers have all gone. 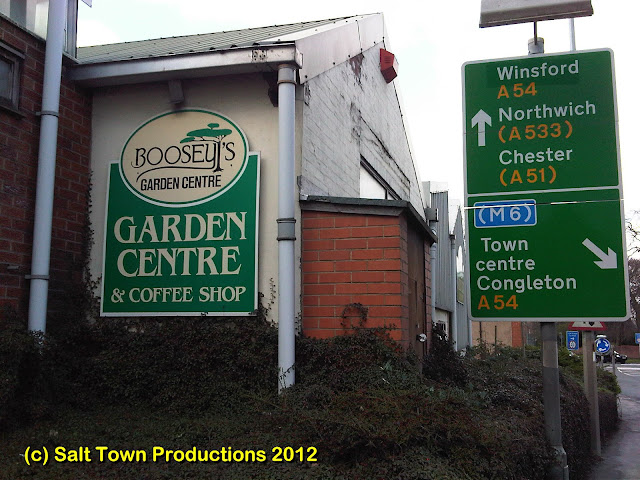 So ends our brief valedictory visit to Boosey's Garden Centre.

If you have memories and  pictures of the Garden Centre, and Boosey's Nurseries over the many years they have been part of Middlewich, we'll be pleased to hear from you.

See also this entry which tells you something of the history of Boosey's Nurseries and the adjacent Middlewich Autos which will also disappear as part of the redevelopment of the site.

The original Nursery part of the Boosey company is still in business at Antrobus near Northwich,
selling plants and trees wholesale: