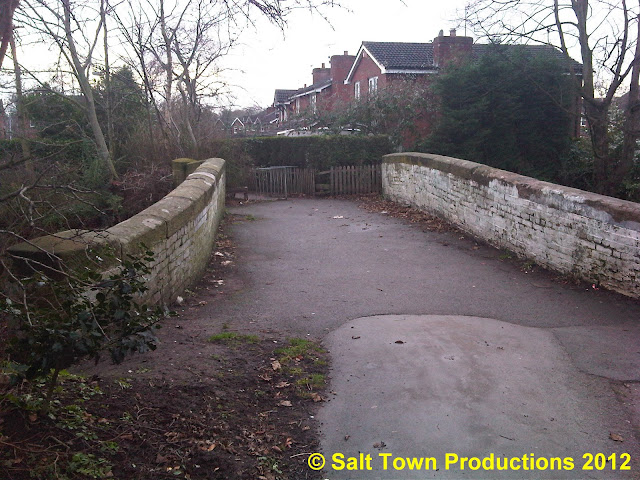 A familiar sight to children, parents and grandparents on the daily trek to and from Middlewich Primary, St Mary's and Middlewich High School, our picture shows Flea Lane Bridge on the Shropshire Union Middlewich Branch.
This is just one of many traditional 'hump-backed' canal bridges in the town.
In fact, to our knowledge, only two of them have been replaced by more modern structures - the bridge carrying Long Lane over the canal just a few yards east of this one in the late 1960s and, famously, the Town Bridge itself in 1931.
(The well-known, 'turnover bridge' on the Sandbach road, where the road switches from one side of the Trent & Mersey to the other, looks like a modern bridge, but in fact the original traditional canal bridge is still in place, hidden underneath the modern concrete and brick).
If you're not familiar with Flea Lane Bridge it may look from this angle as if the bridge leads to a dead end.
This, of course, is not the case.
For many years the bridge has been used only for pedestrians and the grey railings at the far side are there to ensure that only people on foot can get through to Eaton Drive.
When the bridge was first built it carried a track which ran from  Middlewich into the grounds of the Manor and was used by horses and carts carrying produce and other goods to and from the town.
The track continued toward the Manor on the alignment of the houses in the background.
The far grander carriage drive taking people to the Manor from Nantwich Road is a few yards to the west of this bridge on the other side of the aqueduct.
Until the new houses seen here were built the remains of a set of gates closing off the far end of the bridge were still to be seen.
Unsurprisingly the name 'Flea Lane' has fallen out of usage and seems only to be used in connection with this bridge, although the stretch of public footpath from the bridge to Manor Lane is still marked as such on Philips/Ordnance Survey maps.
Posted by SALT TOWN PRODUCTIONS at Sunday, April 22, 2012