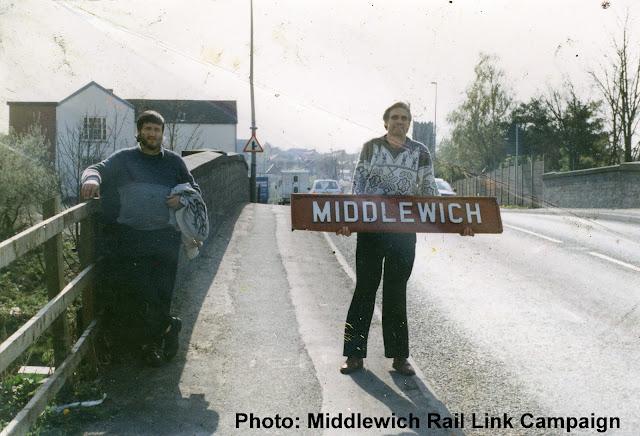 by Dave Roberts
We half thought of using this photo as part of an April Fool stunt and trying to suggest that during the 1990s road congestion had got so bad in Kinderton Street that the council had hired someone to walk along the rows of  cars reminding them which town they were stuck in.
Something along those lines anyway.
In the event we decided against such foolishness and so here is the picture with the real story behind it.
It was taken as part of the Middlewich Rail Link Campaign's never-ending efforts to raise awareness of the Sandbach-Middlewich-Northwich railway line and the need for its re-opening to passengers.
We have, of course, seen that signal box nameboard several times before (see below) and we will be seeing it  again before we're done.
It had recently been returned to Middlewich from Uttoxeter, courtesy of George Dean,and members of the railway campaign were keen to show it off on every conceivable occasion to remind everyone of the line's (and the campaign's) existence.
Winston Lea, who was a cellarman at the Kings Arms Hotel at that time and a very obliging chap, offered to carry the sign for us on one outing up to the former station site and here he is showing it to passing motorists.
What they thought of it is not recorded.
Also in the photo is MRLC Deputy Chairman Peter Cox who is standing where I stood with my Dad one day in  the 1950s and saw my first steam train, proving that there is such a thing as love at first sight.
The bridge was rebuilt and strengthened a few years later to cope with the horrendous amount of road traffic it has to bear, and new, much higher parapet walls inserted into the structure, so it's now much more difficult to see over the wall.