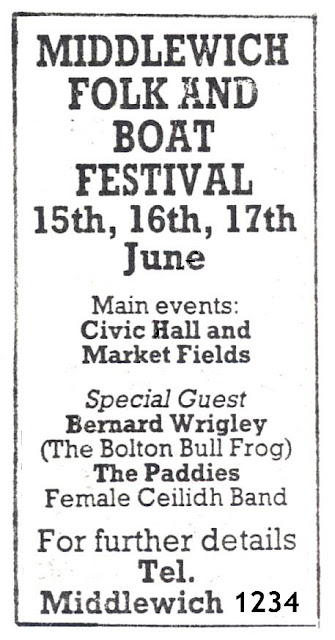 
by Dave Roberts
As we approach festival time in Middlewich once more we take a look back to May 1990 when preparations were in full swing for the first ever Middlewich Folk & Boat Festival.
The original plan was for the inaugural festival to take place in June 1991, giving organisers plenty of time to make preparations but, almost at the last minute, it was decided to go for June 1990.
Although money was tight and everything in the early years was done on the proverbial shoestring some pre-festival advertising was clearly necessary and the above ad appeared in the local press in the month before the festival.
We've altered the contact telephone number to a fictitious one just in case some wag should decide to ring it after all these years.
Anyone not in the know who turned up for the Middlewich Paddies concert expecting to see a 'female ceilidh band' was disappointed. They're not, of course. A ceilidh band, I mean.