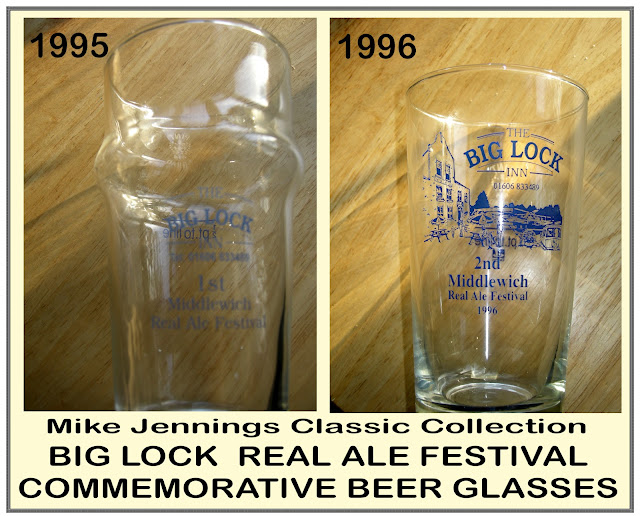 A couple of exhibits for our virtual Middlewich Museum today, courtesy of our regular correspondent Mike Jennings, who has been musing on the subject of Beer Festivals in Middlewich and sent us these pictures of the commemorative pint glasses produced for the Big Lock Real Ale Festivals in 1995 and 1996.
The 1995 glass was a relatively plain affair but, following the success of the first festival,  Big Lock landlord Tony Hatton pushed the boat out and had a much more elaborate glass produced for 1996 featuring a version of the ink drawing of the pub and lock which he was using on advertisements, menus etc. at that time.

I was reading about the 10th Middlewich Beer Festival next year and it came to my memory that there used to be a Middlewich Beer Festival held at the Big Lock. Well I have found the evidence in my cupboard with the pint glasses. Although I was not able to remember much after downing 3 halves of Roger, Over and Out. But I did somehow manage to get the glasses home intact.
1st Festival 1995, 2nd 1996. Therefore it will be the 12th annual festival this year?
Cheers
Mike
Many thanks to Mike for the photographs. As far as we know, the Middlewich Beer Festival held at the British Legion over the last ten years has no connection with this early pioneering event organised by Tony Hatton at The Big Lock on the mid-90s. The current event is a Charity Festival organised by the Middlewich Round Table at the  Royal British Legion Club each year.
As Mike says, this year the event will be celebrating its tenth anniversary, and the Round Table are to be congratulated on the success of the event over all that time.