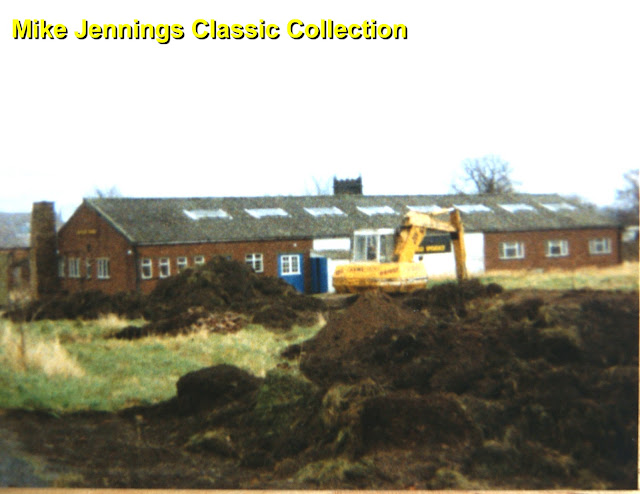 In this momentous year for shopping in Middlewich here's another one in the series of photos kindly supplied by Mike Jennings and showing the site where it all started twenty-five years ago.
As always we can use the tower of St Michael & All Angels church as our benchmark and deduce that the area shown here is the 'top' part of the present day Tesco car park and my first impression was that Mike was standing  alongside the site of the current supermarket  when he took this picture, probably round about where the pavement and disabled parking bays are at the side of the building.
However, just after this entry was first published, Diane Russell pointed out that he was more likely to have been at the top end of Southway (see comments, below) and, just by coincidence, I had been on a shopping trip  to Tesco and  come to the same conclusion.
I took a similar photo of the Orchard Works fifteen years earlier than Mike, and it can be seen here. I think Mike was a little bit closer, but not much.
It is, perhaps, a little surprising that the bulldozers had moved in and started to clear the ground before the Orchard Works was demolished, but one possibility is that the building of the car park was a separate contract from the building of the supermarket itself.
The small industrial buildings we saw here can just be glimpsed on the extreme left of the picture.

Email ThisBlogThis!Share to TwitterShare to FacebookShare to Pinterest
Labels: MAKING WAY FOR GATEWAY 1987 (3)