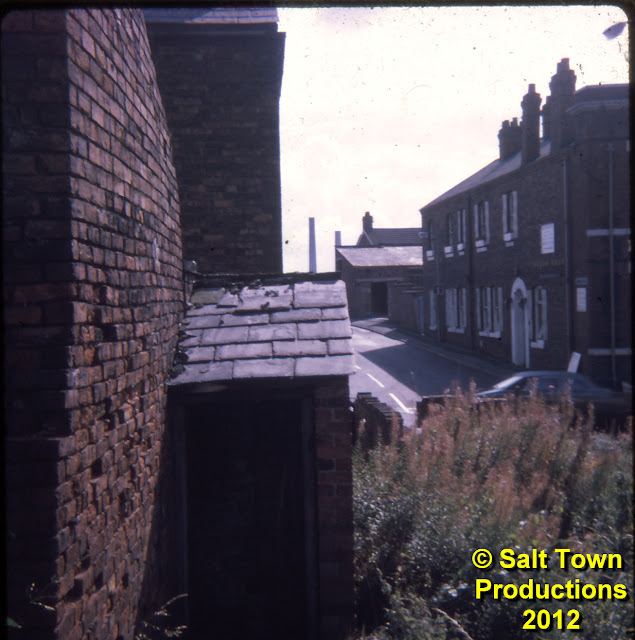 Here's the full version of a slide which formed the basis for the original Salt Town Productions logo, as seen here.

This is an amended version of the original description of the scene:

On the right is, of course, the Boar's Head Hotel. In recent years this has been extended at the rear in sympathetic style so that those not in the know might assume it has been like that for many years.
To the rear of the pub is the substantial bulk of an old stable  building at the end of the car park. It can be seen that the building is of sufficient height to seriously affect the light reaching the windows of the cottage behind it, making nonsense of the current owner's claim to be affected by the much lower Portacabin which is there now.
The Portacabin in question is used by the local pigeon club as their HQ and supersedes an old converted railway wagon which was situated just inside the car park entrance.
The building on the left is Costello's shop and we can now get a good view of the 'privy' which once served it.
Behind the camera are some interesting old buildings which can be seen here.
The two chimneys in the background belong to Seddon's Salt Works on Brooks Lane which closed seven years earlier. These chimneys were the last of the Middlewich open pan salt works chimneys to be demolished and can be seen here.