At this distance in time I don't suppose anyone will really object when I say that the first name that sprang to mind when I looked at this picture from the Phillip Shales Collection was Tommy Handley?

It's another photograph  taken from a folder simply marked 'Chairman's Sunday', without any specific year being mentioned, and follows on from this one.

The gentleman on the left would appear to be another one of those visiting chairmen from neighbouring local authorities and the gentleman next to him could quite possibly be the clerk to that same local authority.

They're standing in the same place on Hightown as the MUDC Chairman and his escort were in the first photo and were, presumably, in the same procession.

Although we can't, at present, tell you the exact year of these two photographs, we can tell you that they were certainly taken on the same day and probably only minutes, or even seconds, apart.

The clue is the chap in the flat cap standing outside the employment exchange. He's in exactly the same place in both photographs: 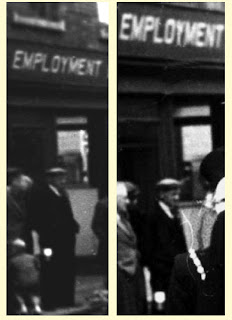