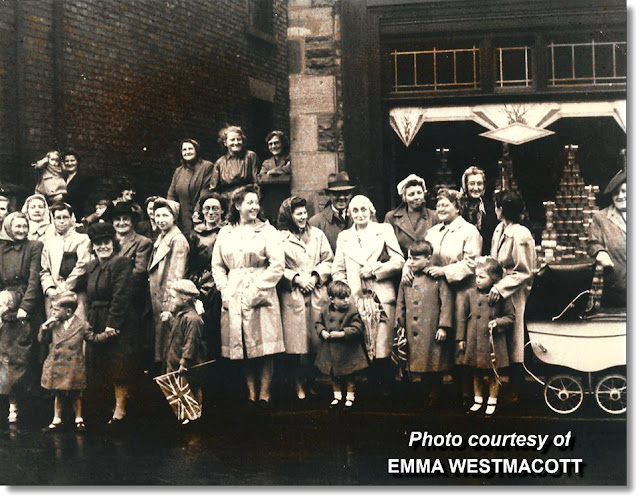 Following a discussion on Facebook, Emma Westmacott of Nantwich Road has kindly allowed us to use this photograph of crowds in Wheelock Street, Middlewich on the 17th July 1946. They're all waiting for the arrival of King George VI and Queen Elizabeth on the occasion of a Royal Visit to Middlewich that year.

This is the photo I was talking about, Dave. On the back my Mum, Jenny Sant, has written:

'This photograph was taken just after the war, in 1946, in Wheelock Street, Middlewich.
We are all waiting for King George VI and Queen Elizabeth to pass by on their Royal tour.
Notice the rainy day fashions, the Co-op shop window display and the baby's pram!
I am the little girl holding my Mum's hand and a big flag!'

I think this is a newspaper photograph . I'm sure there are a few (very old) faces which people might recognise!

There's a much better known photo of the same occasion, which can be found in many 'Old Middlewich' photo collections:

Notice that even as long ago as 1946 Reg Taylor's Newsagent was well established and can be seen on the left of the photo. It's now the office premises of Carrie-Ann Sudlow's web-design consultancy, and to its right is the shop long known as 'Luther Walton's' which is now Chimichango's Mexican restaurant. Next to that is the fondly remembered 'Meadow Dairy', now the site of Betfred's betting shop.

The highlight of 1946 was a Royal visit on July 17th, the first to Middlewich since Queen Margaret in 1459. Their route would be over Wheelock Bridge, Chester Rd, Wheelock St, Lower St, Leadsmithy St, Hightown, Wheelock St (to Whiston’s Garage) and Nantwich Rd. (to Wallange Bridge)*. Because of the expected crowds from the surrounding towns, footpath space was reserved for schoolchildren and elderly people and for ex-servicemen in front of the War Memorial. Before the day an arch was erected over the road from the Golden Lion in Chester Rd. to the cemetery railings. Across the top it said, “Loyal Greetings to their Majesties the King and Queen”. Coloured light bulbs ran underneath the length of the arch. On the day of the visit approximately 1,200 children from the Sandbach area were brought to Middlewich in two special trains and given reservations on either side of Chester Rd., from Wheelock Bridge to Williamson’s garage. The older citizens were given seating accommodation at Newton Bank and the Junction of St Anns Rd. and Nantwich Rd. and in Hightown, in the churchyard. In front of the war memorial stood several ranks of ex-serviceman, plus the chairman of the council (Mr Blease) along with other members of the UDC and officials. Sandbach U.D.C. members and Holmes Chapel and Byley parish councillors stood alongside. One hundred and eighty Girl Guides and Brownies lined Leadsmithy St. and Lower St., together with all the Middlewich schoolchildren and teachers, plus children and teachers from Congleton, Hassall Green and Brereton private school. A special place had been reserved for the children from The Manor, which was now a residential school for the deaf. The parish Church bells had been ringing at intervals since mid-morning but about 15 minutes before the King and Queen were due to arrive they stopped. The bell ringers also wanted to see the royal visitors and so had posted a lookout at the top of the church tower so that when the Royal cars came into view, in Chester Rd., he could dash down to the ringing chamber and give the news. The bells rang out again as the Royal cars made the return journey through the town.

* Can anyone please remind us just where 'Wallange Bridge' is? We ought to know, of course...-Ed