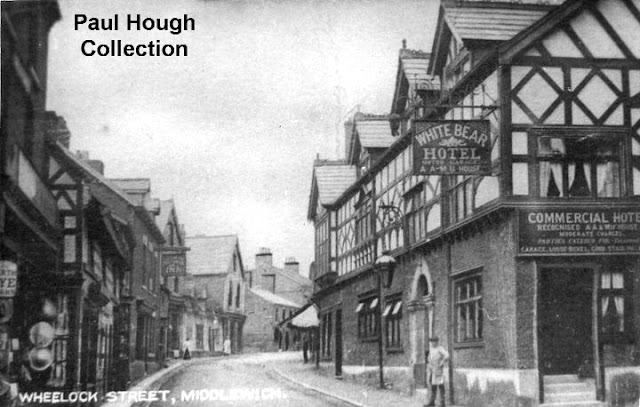 Here we are back in the familiar surroundings of Wheelock Street, a thoroughfare which seems to stay the same the more it changes.
The main focus of this particular picture from the Paul Hough collection is, of course, The White Bear Hotel, currently enjoying a new lease of life and certainly looking more spick and span these days than it did when this picture was taken, in the days when it was a 'commercial hotel' and catered for travelling salesmen (known these days as 'reps').
It's interesting to note the side door, long ago bricked up and replaced by a window.
Middlewich (Images of England) by J Brian Curzon and Paul Hurley (Tempus Publishing 2005) features a photograph taken around the same time (page 67)along with this one (page 105).
Messrs Curzon and Hurley also tell us that Wheelock Street  boasted several other pubs at the time (circa 1904) and they were: The Commercial, The Bulls Head, The Black Bear, The Red Lion, The White Lion and The Red Cow.
This is useful, because we've been trying to identify the pub on the opposite side of the road in this picture and, so far, can only make out the word 'Inn' on the sign.
We can, of course, rule out the Red Lion and the Red Cow, which were both at the top end of the street, so that leaves us with a choice of the others.
The pub in question looks too small to be a commercial hotel with the same status as The White Bear, so that might rule out The Commercial (although it would make sense for two commercial hotels to be on opposite sides of the street).
So could this 'Inn' be The Bulls Head, The Black Bear or the White Lion? The word 'Inn' could follow any of those. Anyone know which it is?
We can safely date this photograph as prior to 1920 because that is when the familiar Alhambra cinema was built, its arched ornamental frontage fitting in perfectly between the two gabled buildings on either side and replacing the much lower and much older building seen here.
In fact so well does it fit into its surroundings that it gives the impression of always having been there, to such an extent that to see this still recognisable Wheelock Street scene without it comes as a slight shock.

Editor's Note:
This proved to be the shortest-lived and most easily solved 'conundrum' so far, largely due to the fact that Geraldine Williams has a good memory, particularly when it comes to her own collection of postcards:

Geraldine Williams: One of the previous Wheelock Street postcards showed the inn sign from the other direction and it seemed to read The Bull's Head Inn'

Here's the link to the relevant Diary entry, which reveals that we've already answered our own question...

...there's also some additional information about Wheelock Street and the Alhambra 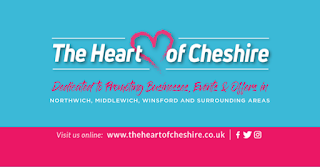