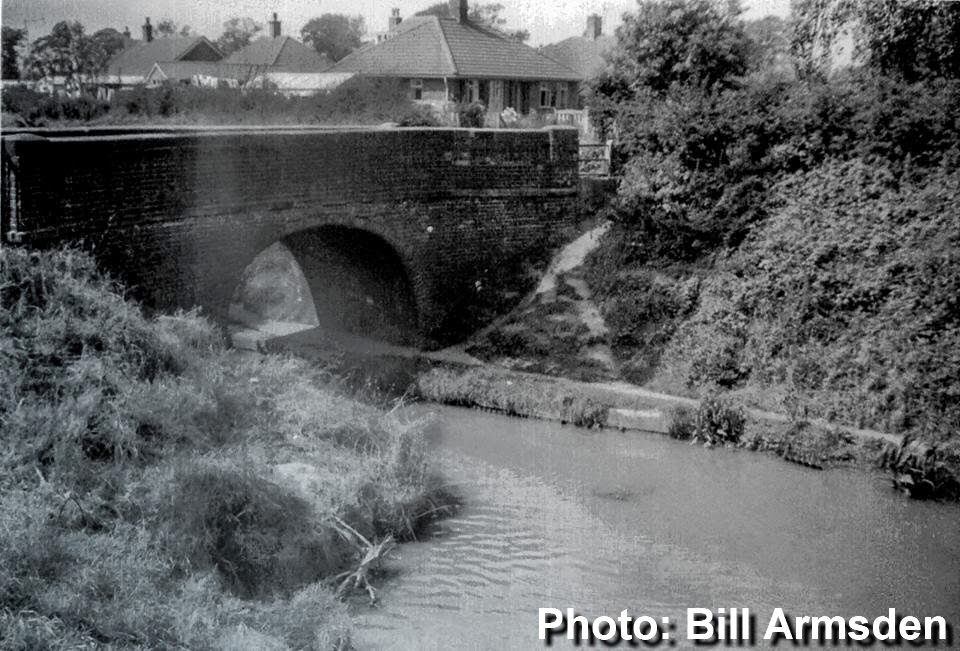 We're indebted once again to local photographer Bill Armsden who found this remarkable image while he was looking through some family photographs.
In fact, Bill thinks it may well have been taken in the 1960s by his mother, who died recently.
We're calling it 'remarkable' not because there is anything particularly special about the photograph itself, but because it depicts a lost feature of our town - the only bridge on the Shropshire Union Canal's Middlewich Branch (within the town boundary at least) to have been destroyed and replaced by a modern concrete structure.
Nearly all of Middlewich's canal bridges have survived through the years, the only exceptions being the most famous of them all, the Town Bridge, which was replaced by a modern structure in 1931 and the Turnover Bridge, drastically altered in the 1960s, both on the Trent & Mersey.

The replacement of this particular bridge happened during that curious and mercifully short-lived era when the car was king and, in the rush to make everything easier for the motorist, a historic canal bridge which had been serving the community since 1829 could be sacrificed.
Or am I being too harsh? Was there, in fact, a problem with the original bridge which would have cost too much to put right, making the concrete replacement the better option?
I certainly can't remember there being any public outcry over the destruction of the old bridge (which there certainly would be today if anyone suggested destroying such an iconic structure).
Does anyone know the circumstances of this drastic change to the SUC landscape?
Was it simply a question of the need for a  a wider road, which couldn't be accommodated by the old bridge?
Housing development in the area around the 'new canal' over the years has, of course,led to an increase in road and pedestrian traffic on the roads leading from the town to these outlying estates. The St Ann's Road Bridge, for example, survived, but with an additional pedestrian footbridge. Was it simply that the Long Lane bridge couldn't be adapted to the new traffic conditions and thus had to go?
Whatever the reason for the change, it comes as a bit of a shock to see the modern bungalows on the other side of Long Lane, which still look very much the same today, with this long-gone bridge in the foreground.
And look at the steel and concrete 'stile', to the right of the bridge, which I'd always thought was put there when the new bridge was built.
Is it the same 'stile' which is there today? It certainly looks like it.

Geraldine Williams I think the photograph must have been taken a little earlier than Bill thought. My parents moved into one of the new Chris Earl houses bordering the canal in Hubert Drive no later than 1959 and there would have been gardens where the photograph has been taken from. I well remember the scramble down that path from the bridge to the canal - it's a wonder no-one ended up in the water! Bill Stoneley lived in the first bungalow.

Dave Roberts Yes. I should have mentioned that Bill says that he thinks his mother took the picture from the bottom of their garden in (I think) Hubert Drive.


Geraldine Williams I suppose it was a shame that the original bridge had to go but I can remember when Long Lane was just a dirt track and when you consider all the housing that was eventually built - Long Lane North and South, the extended Hayhurst Avenue/Rolt Crescent area etc - even if the bridge was sound it would never have been wide enough to take the traffic and, more importantly, provide safety for pedestrians. The steps created down to the canal were an added bonus of course!

Paul Smith (to Ron Evans) I'm guessing the coving stone I saw in the mud must have come from this bridge. I wonder what me Aunt Dol would have made of all this hoo ha?

Ron Evans (to Paul Smith) Paul,The surface of Long Lane used to be clinker cinders from some local factory and was replaced periodically! If you fell on it you could look forward to deep grazing which took ages to heal.
Used to have a smoke under that bridge on the way to school.....courtesy of Barry Jones whose mum gave him five fags every morning.....is he still in Middlewich?
Our Doris moved into her house in Long Lane in 1962!