BEFORE THE MIDDLEWICH DIARY: RICHARD DEVANEY IN A KILT 1973 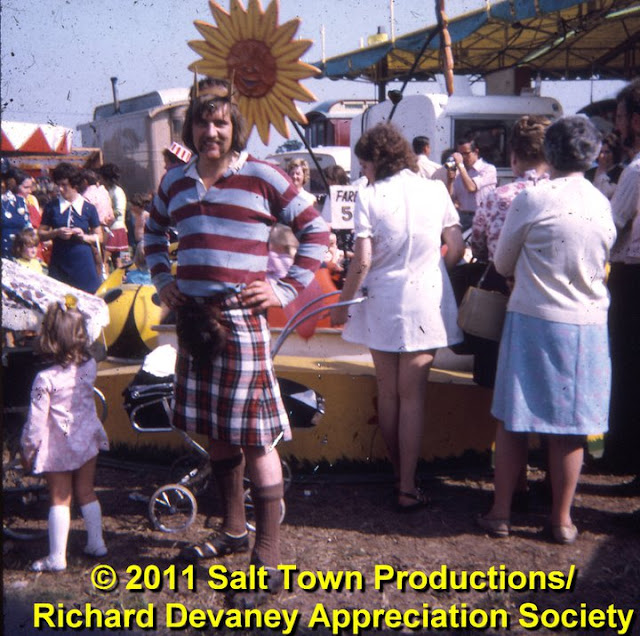 
For Mr Ian Murfitt and all his other fans here by popular request is
the  notorious 'Richard Devaney in a kilt' photograph, taken at the Middlewich Carnival 1973. Richard was one of the founders of the Middlewich Folk & Boat festival in June 1990.

If you look closely, you can see that Mr Devaney is also sporting some quaint kind of headgear, but we must stress that the sunflower is not part of it.

Mr Devaney does not wear giant sunflowers on his head (though we wouldn't put it past him).

Geraldine Williams Was his headgear the prototype for Princess Beatrice's hat....??!!

Liz Mcguinness Yes it'll keep the kids away from the fire Dave!!

Angela Appleton I remember babysitting for Richard Devaney when I was about 15, sure he had twins. They had a Jack Russell dog and everytime I moved it growled at me. The babies were crying and I didn't dare get up.

Email ThisBlogThis!Share to TwitterShare to FacebookShare to Pinterest
Labels: 1973, BEFORE THE MIDDLEWICH DIARY., Carnival 1973, DEVANEY RICHARD, RICHARD IN A KILT 1973