A RELIC OF THE FIRST WORLD WAR 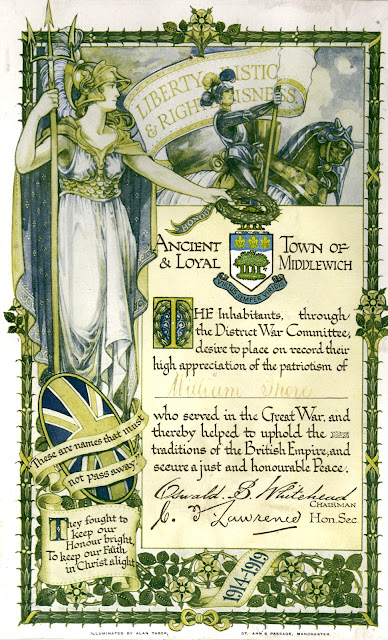 by Dave Roberts
To mark the season of Remembrance this year we bring you a precious piece of Middlewich history from our private family collection.
This illuminated document was presented to William Shore of Middlewich in 1919 to mark the town's appreciation of the part he played in World War I, the dates of which, you'll notice, are given as 1914-1919 rather than the more usual 1914-1918. This is because the Treaty of Versailles which, it was hoped, would bring a chance of a lasting peace in Europe, wasn't signed until that year. The years 1918 and 1919 are regarded as interchangeable by war historians.
William Shore was my mother's uncle and lived all his life in the town.
His son, Harry Shore, was responsible for building number 44 King Street just before the Second World War and this certificate of appreciation was hung on the wall of one of the bedrooms in that brand new house, and stayed there for over fifty years, gradually fading in the sunlight as the years went by.
The certificate was signed by the Chairman of the District War Committee, Oswald B Whitehead, and the Committee's Hon. Secretary C F Lawrence, who was, as we've seen before in the Middlewich Diary, a noted Middlewich historian, as well as being clerk to the Middlewich Urban District Council.
Mr Lawrence's influence is very strong in the wording of the certificate. He was a staunch patriot and Royalist and never missed an opportunity  to stress Middlewich's strong Royalist traditions.
The certificate also feature the crest and motto Virtus Semper Viridis ('Virtue Is Always Flourishing') which was used for many years on Middlewich UDC stationery, but  never officially adopted as the town's coat of arms due to objections from the College of Heralds.
A version of this crest is carved into the back of the Council Chairman/Mayor's chair in the council chamber. The device was also used as an emblem by Middlewich Heritage Society in its early years.

On Thursday November 10th the Middlewich Diary was looking at a well-remembered view of the town centre as seen from King Street and, to acknowledge the time of year when the people of the town come together to remember the fallen, also took a look at Middlewich's main war memorial which, despite all the changes over the years, still stands only a few yards away from its original position in the town centre.

On Remembrance Day itself, which fell on A Friday last year, we looked at the wreaths left at the War Memorial after its re-dedication in 1972