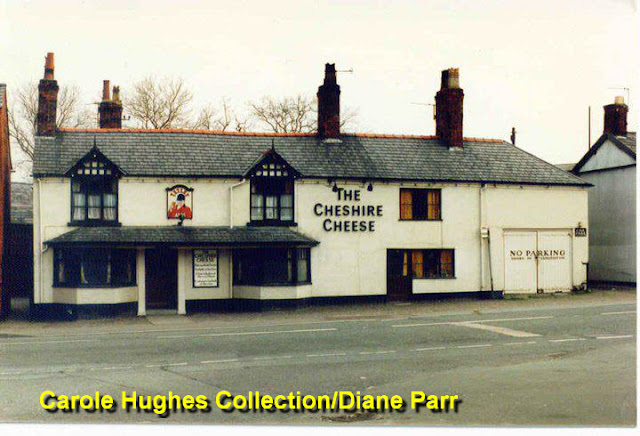 Continuing our series of photos of Middlewich as it was twenty-five years ago, here's one of the town's favourite Lewin Street pubs, the Cheshire Cheese. Always a cosy and welcoming sort of place, 'The Cheese' continues as an unpretentious but well-frequented watering hole.
In the last twenty five years the pub has expanded somewhat, while at the same time managing to keep its traditional atmosphere.
The licensed premises have now been extended to incorporate the small cottage to the right of the 'Cheshire Cheese' sign and the former car park at the rear (indicated by the small black and white sign on the extreme right) has been transformed into an excellent outdoor performance area which has been well-used for Middlewich Folk & Boat Festival and Middlewich FAB Festival Events.
In 2012 the Cheshire Cheese looks smarter than ever, as can be seen from the entry on our sister site, the Middlewich Directory:

Geraldine Williams: It's a good many years since I was last in The Cheshire Cheese but I do remember that at Christmas they used to cover an entire wall with fir branches and fairy lights instead of having a Christmas tree (probably because of lack of space) and how effective it was.

Robert Sheckleston: Always been a great little pub. The last time I had a pint in 'The Cheese' Graham Woodbine was the landlord.

On November 4th 2011, the Middlewich Diary was making one of its numerous visits to
MIDDLEWICH STATION