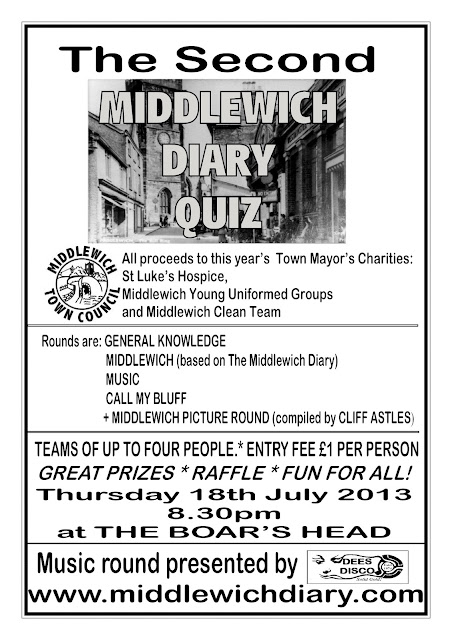 Following the success of our first Middlewich Diary Quiz,  we were back at our old stamping ground, the Boar's Head in Kinderton Street, for another evening of fun and fundraising on the 18th July 2013, this time raising money for causes closer to home with all proceeds going to this year's Middlewich Town Mayor's Charities. The 'Middlewich Past & Present' Round was based on The Middlewich Diary, with all the answers to be found here.

The main prize was something really special

We were offered a fantastic prize for the quiz by local artist IAN HILL-SMITH who  created one of his brilliant caricatures of the winning team in the Second Middlewich Diary Quiz from a photo taken on the night by Peter cox.

A  great chance for the winning team to be immortalised by this excellent local artist.

Ian was the man behind this image, along with many others: 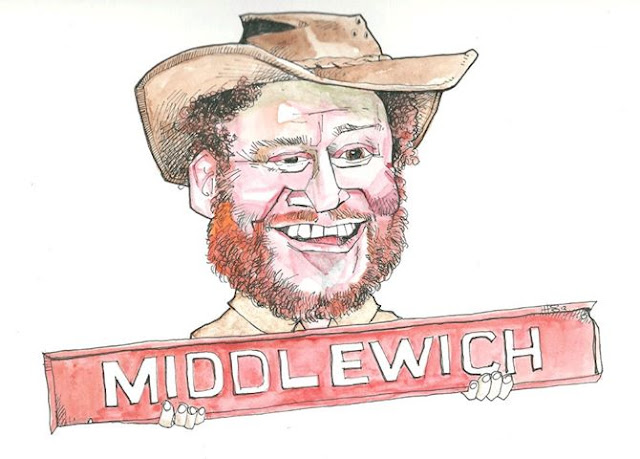 - A very flattering likeness, I can assure you!

Ian's caricature will be framed and presented to the winning team and will also appear on the Middlewich Diary.

The questions and answers from the Middlewich Round and also Cliff Astle's 'Middlewich What & Where?' round will also appear on the diary soon.

In the meantime, if you'd like to take a look at some of Ian's other work, just click on the link below:

"A brilliant quiz, which raised £84 for the Mayor's Charities. Thanks to Dave, Peter and Liz for organising, to Ian for donating his caricature prize, and to everyone for coming along and making it such a good night!"

The Folk & Boat Festival made heavy losses in 2022. We'll bring you up to date as the situation becomes clear.