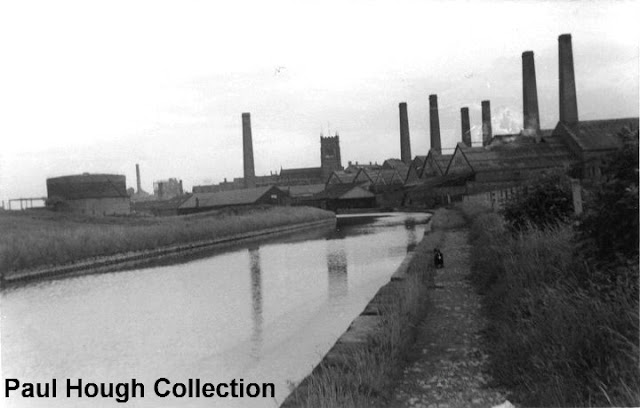 Can it really be true that our town once looked like this?
As our salt town days recede further and further into history, and Middlewich becomes more and more gentrified, green and flower-bedecked, it sometimes comes as a shock to look back on a scene such as this one and to realise that the transformation has taken place during our lifetimes.
What greenery there was back in the 1960s was grimy and soot-speckled and served only to highlight the drabness of our industrial surroundings.
This once-familiar scene shows, on the right, Seddon's Pepper Street works, probably around 1965 and not very long before salt production by this time-honoured method ceased on this and Seddon's other two Middlewich sites in Wych House Lane and Brooks Lane.
To the left, and on the other side of the Trent & Mersey canal, is Middlewich gasworks. Immediately to the right of the gas holder is the Town Bridge where this companion photograph was taken from, looking at the salt works and gasworks from the opposite direction.
I've decided to go for a date of 1965 on this one because also to the right of the gasholder, and above the Town Bridge, are the remains of ICI's alkali works in Brooks Lane/Booth Lane which was closed in 1962 and would have still been in the process of demolition at that time. Pochin Ltd now occupies the site.
There's another reason why I feel that 1965 would be about right, and it's a very subtle one. If you look carefully just to the right of the unmistakable St Michael's Church, you can just make out the top of a long roof with four protrusions. This is the roof of the old Middlewich Town Hall which stood where the amphitheatre is now, and the protrusions are the Victorian ventilators which adorn many buildings of the period. The Town Hall was demolished in the early 1970s.
It's hard to tell from this photograph, of course, whether or not the salt works was still in production. Open pan works were always dilapidated and ramshackle looking structures, even when they were in full swing, so the apparent dereliction of the works isn't really a clue..
The picture may have been taken at the weekend when production was not taking place.
Alternatively, it may have been taken in 1967 after the works had closed, but that seems a bit late for so much of the ICI plant to be still in existence.
The canal seems very quiet, with little evidence of either working or pleasure boats using it.
The sixties and seventies were a period of transition for the canal network from an industrial asset to a pleasure amenity, and both kinds of boats co-existed happily together as they still do to this day.
The difference nowadays being that working boats are outnumbered many times over by pleasure boats and are themselves, with just a few exceptions,  part of the leisure industry.
The site of the Pepper Street works is now occupied by 'The Moorings' housing development.

Jacqui Cooke Yes, I remember this scene quite well, although in this case black and white photography isn't very flattering.
The sun always used to be shining!
It didn't seem so bad at the time as we didn't know any different. In those days it was our industry - and what would we have done without it?
I remember my friend's Dad working there, and we used to go and see him in the school holidays, taking him a treat for his lunch.
He was always pleased to see us and would sit outside to eat his lunch and chat with us for a while.
I remember once he offered me a cup of tea out of his enamel brew can, which I always saw him carrying on the handlebars of his bike.
Uggh! I'd often wondered what was in that white can! Happy days, in so many ways...