by Dave Roberts
These photographs from the Mike Jennings Classic Collection were originally going to form the basis of a series showing the proposed site of the new Tesco Superstore at the  time when its days as an industrial site were coming to an end, and its new life as part of Middlewich's 'retail sector' were in prospect.
We've kept them on the back burner for a while as we waited for the situation over the future of the site to be resolved.
For a while it looked very much as though the existing supermarket and its car park were going to be transformed by Tesco into a gigantic 'superstore', with adjacent land on the other side of Southway being given over to a car park to service the new store; the only fly in the ointment as far as Tesco was concerned being plans by Morrisons to build another supermarket in Chester Road.
Eventually, after much controversy, and after Morrisons had built their new store, Tesco announced that the plans had been dropped.
This appears to have been more as a result of a change of policy nationally than being due to local conditions.
It's very often forgotten that Fine Fare were the first supermarket group to look at Middlewich. They considered the Southway site as well as the old WMC Motors site (now the home to Lidl) and another site near to Middlewich Town Football Club in Finney's Lane.
By the time planning permission was obtained for the first  supermarket in Middlewich,the company had become Gateway as explained here, with the Somerfield name being introduced a few years later.
These photographs, together with the ones in the above link and also this one show the area in 1987 as it was when it was on the verge of becoming the site of the  town's first real supermarket.
And it's worth pointing out once again that Middlewich now has three medium sized supermarkets, all within

easy walking distance of each other - something which many towns of this size can only dream of. 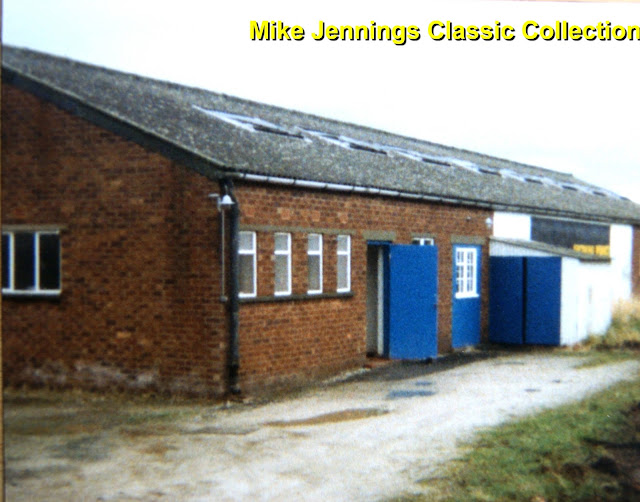 The Orchard Works 1987. The long, low and utilitarian building was a sewing factory owned and operated by F Coupe and Sons, who also ran the Lily Works across the road in St Ann's Road (now the site of Newton Court) making clothes for babies and children. Notice that, although the F Coupe & Sons sign has been removed, the yellow Orchard Works sign still remains. Quite possibly the company thought it could re-use a sign saying F Coupe & Sons, whereas the Orchard Works  one was surplus to anyone's requirements. 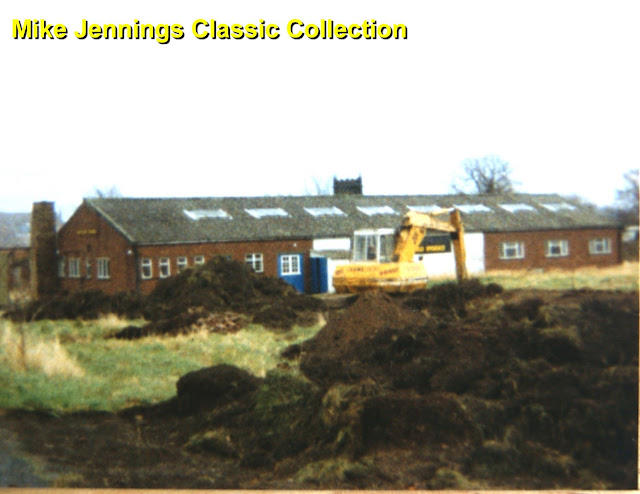 Here we see the sewing factory in its entirety, looking on helplessly as the mechanical diggers start to prepare the site for a new era. On the extreme left are some derelict industrial buildings which, as far as we know, were never part of the Orchard Works. They appear in this Diary entry and a clue to their origin may lie in the old name for Southway, Tannery Alley. Our old friend the St Michaels Church Tower, which has helped us find our way around many a lost Middlewich location, can be seen peeping over the centre of the building's roof. From most parts of Tesco's car park this is now hidden by Wallcroft Gardens, the housing development which connects Wheelock Street with the road connecting King Edward Street to the other end of the car park (or would, if access was not restricted for the general public). 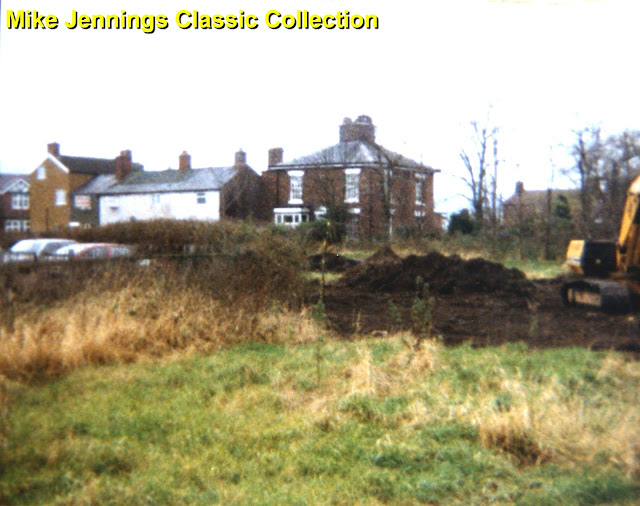 Whether Mike Jennings had inside information about the actual location of the new supermarket only he can tell us, but in this final shot he managed to pinpoint the site exactly. The buildings in the background are still there, the one on the right being the former home of Trevor Williams the delicatessen owner and his family. The land to the right of this house, between Southway and Darlington Street, with access from Wheelock Street,  was to have been the location of the car park serving the new mammoth Tesco store which would have replaced the existing store and its car park. Notice that the all-enveloping greenery which is now such a feature of Middlewich has not yet begun to flourish.
The closest we can get to a present day comparison is the photo below, taken on the 10th July 2013. 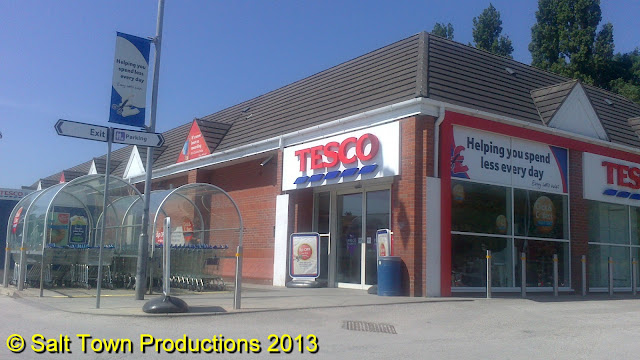 The buildings in Mike's 1987 photo are hiding behind Tesco as it basks in the warm Middlewich July sunshine, and those insignificant looking trees in front of the Williams house are soaring to great heights on the other side of Southway.
Tesco seems to dominate the scene but, it must be said, to a far lesser degree than it would have had its plans for Middlewich come to fruition.
As a reminder of what might have been, here's the company's explanatory diagram one more time. 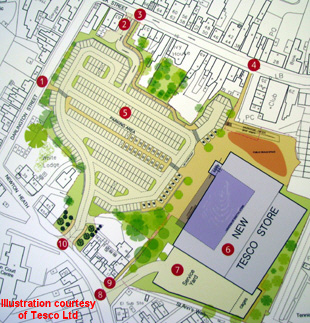 As a public relations exercise it was a disaster, because it brought home to local people for the first time just how gigantic the proposed store and its car park would have been.
In the event, as explained above, the plans were dropped, to a great extent because of a re-think by Tesco on its policy of building massive stores all over the country.
Now Tesco Middlewich is just another supermarket competing for our trade with Morrison's and Lidl.
The demolition of property owned by the company in Wheelock Street and Darlington Street has gone ahead (delayed, seemingly, by the need to remove asbestos from the buildings) and it remains to be seen what happens to that huge area, right in the middle of our town, where the new car park was to have been.