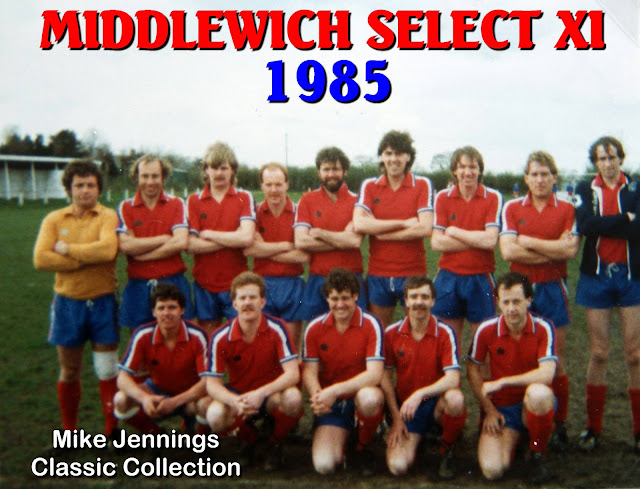 From the Mike Jennings Classic Collection comes this precious relic of sporting times past at Seddon Street; the Middlewich Select XI Team of 1985.

* can anyone supply the missing name?

Update: Martin Spurr has been suggested for the missing name. Both the name and the face ring a bell. Can anyone confirm? -Ed.

Mike says, 'This match was held on 20th April 1985 at Seddon Street, when our opponents were Endeavour F.C. from Middlesbrough.  It was one of our annual matches against our friends from Middlesborough, a team we played at home and away throughout the 1980s. Below is a copy of the programme cover.
The kit was the Boars Head Argyle's strip from the 1977 season. It was an Admiral kit from the same batch made for England in the 1976 European Championship Finals. They failed to qualify and so never used it - But Boar's Head Argyle did!'
And so, it seems did the Select XI! 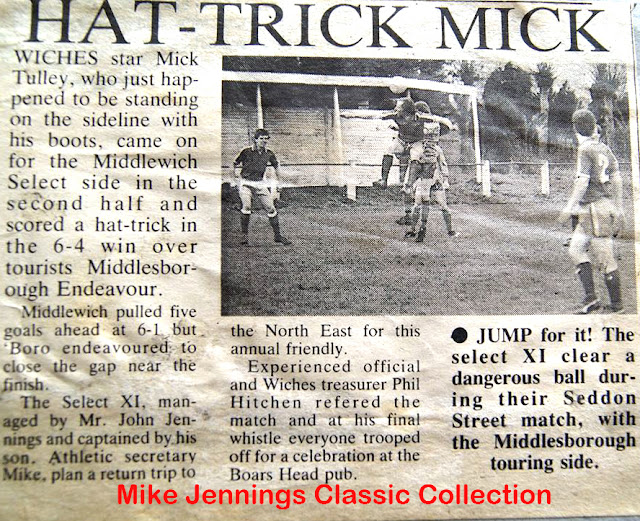 And here's a report on the match, presumably from The Middlewich Chronicle or The Middlewich Guardian
Note the Boys Own Comic-ish tale of 'Mick' Tulley (sic) who 'just happened to be standing on the sideline with his boots' and was brought on for the second half to score a hat-trick and help the team win a glorious victory  over Middlesborough Endeavour.
Well known experienced official Phil Hitchen refereed, his final whistle no doubt being the signal for an epic evening of celebration at the Boar's Head.


Mike has a lot more information on this series of friendlies which he promises to publish as a series in the near future.


UPDATE: (6/10/2015) Just when we thought we had this one sorted out (after several attempts) and had settled on 1989 as the year of the photo (which would, if the date is correct, have meant that this match took place on the same day as the Hillsborough disaster) our old friend and correspondent Geraldine Williams chipped in with this:
'My nephew, Mike Hatton, says that the year couldn't have been 1989, as his mate Dave Hardman went to the Isle Of Man in 1988. Mike thinks it is more likely 1986'.
So the jury is still out on the actual date of the main photo. It could, in fact, have been taken any time after 1977, which is the year the strip was first worn, and there is no proof that the two pictures featured here were taken on the same occasion. We'll leave things as they are for now, and await further information! - Ed

UPDATE: (16/10/2015) In the light of the above information, Mike's now revised the year once again, this time to 1985. It's not clear whether the press cutting and associated information still relates to the main photo, but we've left it there until someone tells us differently - Ed