Mike Jennings has unearthed another photo from his classic collection, and we're looking at some of the workers on the administrative side of the ICI Alkali Works in Brooks Lane in the 1930s.

We hesitate to call them 'office staff', although they're standing outside the company's offices, as they were far more than that.

Many of them were self-taught engineers and scientists who, to employ a well-worn cliche, were 'not afraid to get their hands dirty' in making sure the operation ran smoothly.

Among them is Frank Smith who, in later life, was one of the founding members of the Middlewich Heritage Society and wrote many articles on the subject of Middlewich and its industries.

We've been delighted to be able to make use of some of Frank's work in the Middlewich Diary. For example his evocative 1920s Christmas story A Middlewich Christmas Tale.
Frank also made posthumous contributions to our diary entries on
The Croxton Waterfall.

He was also a member of the works rugby team, as can be seen here.

We'd like some information about the other people shown in Mike's photo and, of course, to fill in the names of all the 'unknowns'. Can you help us put names to faces? 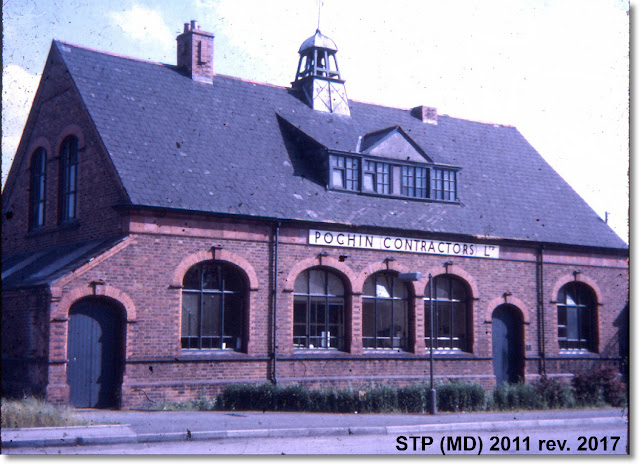 ...and here's the office building they're all standing outside, as it was in its final days in 1973. The building stood on what is now a lawned area in front of the current Pochin building. Shortly after this picture was taken the old offices were demolished, the new ones already having been built behind it. The ornate railings which enclosed the  meagre front garden had long gone - probably taken for the war effort, like the railings around the parish church. Interestingly, though, part of the ornate 'pagoda' style railings can be seen reflected in the window in our main photo. A small remnant of these railings survives next to the Bare Bones Marketing building around the corner, which is itself a remnant of the former ICI works.