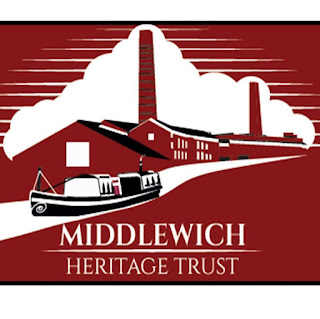 We were very taken with the Middlewich Heritage Trust's new logo, illustrating as it does the 'Wych & Water' aspects of Middlewich's history, by showing a stylised representation of Seddon's Salt Works in Brooks Lane with an equally stylised canal boat  floating sedately by. In actual fact the boat appears to be floating sedately along Brooks Lane itself, but we'll have to put that down to artistic license. What's very striking about the logo is the colours used, which reflect those used by Seddon's Works right up until their closure in 1967.The large brine holding tanks which were a feature of all three works in Pepper Street, Wych House Lane and Brooks Lane were painted in red lead and signwritten with the words SEDDON'S SALT WORKS (or simply, when space was limited SEDDON'S) in white with black shading. 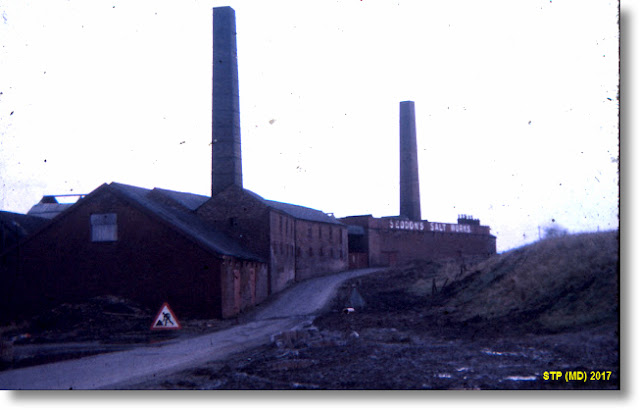 This encouraged us to  take another  look at our own photo of the Brooks Lane Works, taken on Kodachrome film in 1969 using the then popular Kodak Instamatic camera. The works themselves had closed two years earlier in 1967 but remained remarkably intact, demolition only beginning in earnest in the early 1970s. You can read a detailed description of this photo here. Take particular note of the feedback this photo generated.

...and this in turn, encouraged us to return to Brooks Lane to see what the scene looks like in 2017. It's still possible to tell that this was once an open pan salt works, as several sections of the original retaining wall along Brooks Lane remain, although the lane itself has been widened (this happened in the early 1970s as part of a deal with ERF Ltd who opened their Service Centre further up the road in 1971 and needed better access for deliveries and trucks travelling to and from the ERF repair shop on the site). Most of the site has now become home to Tarmac Readycrete and presents a rather dismal face to the world these days. The old salt works, while no oil painting, did have a sort of gloomy utilitarian grandeur to it, which the hotch-potch collection of concrete making apparatus and modern industrial buildings lacks. There are ambitious plans to transform the whole area surrounding Brooks Lane into a housing estate and marina development which will change things beyond recognition, if it ever comes to pass. It's worth remembering that the Sandbach-Middlewich-Northwich railway line is just a few yards away on the other side of these industrial buildings and the site suggested - 'suggested' being the operative word - for our new railway station is just out of shot to the left. If the new development does happen as planned, and the new station is indeed situated here, local residents will be ideally situated for travel to Manchester and Crewe. But isn't that a lot of 'ifs'?
Note: Murgatroyd's brine pumps, which are currently undergoing restoration are just at the top of the hill, behind the gym and tankwash buildings.