FAB FESTIVAL 2017: LOST IN THE MIST AT THE NEWTON BREWERY (ARCHIVED) 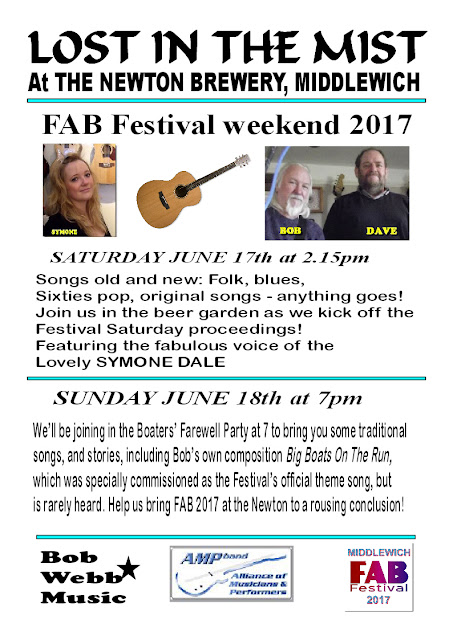 
Note: This originally appeared on QSC (and on our sister site The Middlewich Diary) as a straightforward plug for Lost In The Mist's annual appearance at the Middlewich FAB Festival.

What we didn't know at the time was that circumstances would conspire to make this LITM's last appearance at the FAB Festival and one of my last  appearances with the band, instantly turning this poster/flyer into something of a historical document.

I'd been working with Bob Webb, doing 'humorous' poems and the odd song, for around five years when it was decided to form a band, with melodeon maestro Ian Murfitt as the third member.

This band needed a name and Lost In The Mist was thought as good a name as any. The band celebrated its tenth birthday in May 2018.

We had some good times and played some really fab places as well as some really naff ones - the lot of the 'pub band' for ever, of course.

Like any other band, Lost In The Mist's personnel changed over the years, and eventually, in 2017, it was time for another personnel change, when what might be called my 'musical career' came to an end and the sound of LITM was 'refreshed' once more.

No loss at all, of course, to the band. I was never a musician of any sort, and my singing voice was not the best.

But I like to think that, if nothing else, I added a touch of fun and good humour to Lost In The Mist.

I'd hate to be seen as pretentious, but I have to admit that I've always  identified with the words of the immortal Noel Coward:

'I believe that since my life began, the most I've had is just a talent to amuse...'

Better than nothing, though, eh?

P.S. Current publicity for Lost In The Mist suggests that the line-up changes every two years or so which, apparently, 'keeps our sound and performance fresh and full of life'. Well, thanks a bunch!

This also appears on THE MIDDLEWICH DIARY

THIS ALSO APPEARS ON THE QUEEN STREET COLLECTION
Posted by SALT TOWN PRODUCTIONS at Sunday, August 12, 2018