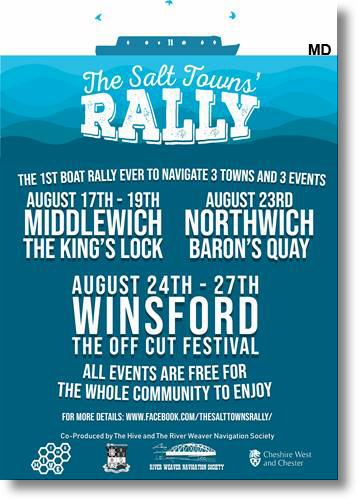 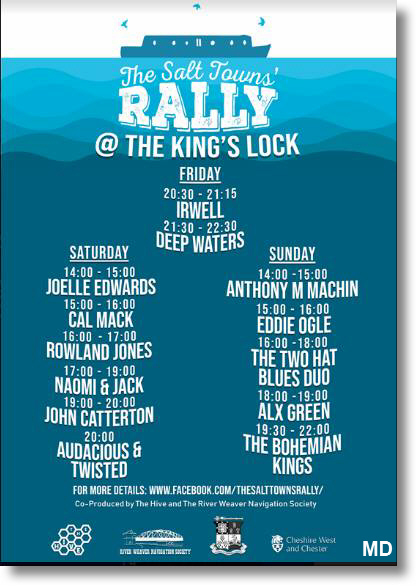 The Salt Towns’ Rally
Friday 17th Aug - Mon 27th August
Middlewich - Northwich - Winsford
The Hive and The River Weaver Navigation Society have teamed up to produce the first ever UK waterways’ boat rally to take in three events across three towns!
On Fri 17th August canal boats will be gathering at The King’s Lock in Middlewich for the reception and launch party for The Salt Town's Rally a brand new mid cheshire waterways event.
After a weekend of festivities in Middlewich the cavalcade of boats will head for Northwich via The Anderton Lift, a stage is being erected in Baron's Quay on Thursday 23rd where artists and bands on stage will entertain boaters and locals from midday.
On Friday 24th the boats depart for Winsford where they will form a parade upon arrival and enjoy a reception at The Red Lion.
The Marina island will be alive with festivities and pageantry until 7pm on Saturday 25th and Sunday 26th whilst the
Offcut Festival on the parkway behind the Red Lion, now in it's 5th year the festival runs from the Saturday through the bank holiday Monday 27th. A trip boat trip will run between The Marina and the Offcut stage and link the two waterside arenas.
The idea of the three towns working together on projects such as this have been long discussed given the shared salt mining heritage and waterways linking Middlewich, Winsford, Northwich. Together the towns are known as The Weaver Valley.
The Salt Town’s Rally sets out to highlight the fantastic waterways that link the three towns whilst campaigning for a boat lift in Winsford to raise boats from the end of the Weaver to the Middlewich branch of the Shropshire Union Canal so as to create The Weaver Valley Ring of water which will become the most popular stretch of water in the country for leisure boaters and tourists.
Intrepid waterways enthusiasts the inland waterways association navigated through broken down canals years gone by to force government to repair them, similarly this cavalcade of boats plan to make an annual pilgrimage from Middlewich to Winsford via Northwich to campaign for the link
The waterways that brought industrial prosperity to mid Cheshire once before are ready to bring prosperity once again in the new age of leisure tourism on and around the waterways connecting the three towns.
The events in Middlewich, Northwich and Winsford are all free to attend!

The idea of a boat lift linking the River Weaver and the SUC Middlewich Branch south of Middlewich has been put forward several times over the years  as a way of boosting the canal tourist trade in the Cheshire salt towns by creating a new 'canal ring' taking in Middlewich, Northwich and Winsford to add to the existing Cheshire Ring and the other  canal routes in and around  Cheshire. The very much simplified map above shows how tantalisingly close to each other the SUC Middlewich Branch and the River Weaver are. The Weaver comes down from Winsford on  the top left, past Winsford Bottom and Top Flashes and winds its way through the valley to a point near Wimboldsley where the Middlewich Branch, coming down from Middlewich top right, passes on an embankment a matter of yards away. The black line, top right, is the West Coast Main Line Railway which runs over the SUC via a girder bridge.

And the idea of a boat rally linking the three Mid-Cheshire salt towns together as a means of promoting the proposal for a new Cheshire canal ring is also excellent.
There has, historically, been a lot of rivalry between the three towns - in particular between Winsford and Middlewich - based on the fluctuating fortunes of the salt industry. Ironically much of that rivalry was based on the fact that Winsford, unlike Middlewich, had direct access to the River Mersey via the Weaver. Middlewich had to rely on the Trent & Mersey Canal, with its link to the Weaver, and onward to the Mersey, via the Anderton Lift.

Attempts to forge closer links between the towns with, for example, a Mid-Cheshire Council (proposed in the 1930s) always foundered because of this commercial rivalry and the residual ill-feeling it engendered.

But that was then, and this is now.

In this post-industrial age it's high time that the three towns got together to promote their common salt making heritage.

The Salt Towns Rally looks like a very good start.

Find out more about the Salt Towns Rally here:

For information about the River Weaver Navigation Society visit: