BEFORE THE MIDDLEWICH DIARY: THE KING STREET ROMAN DIG 1973 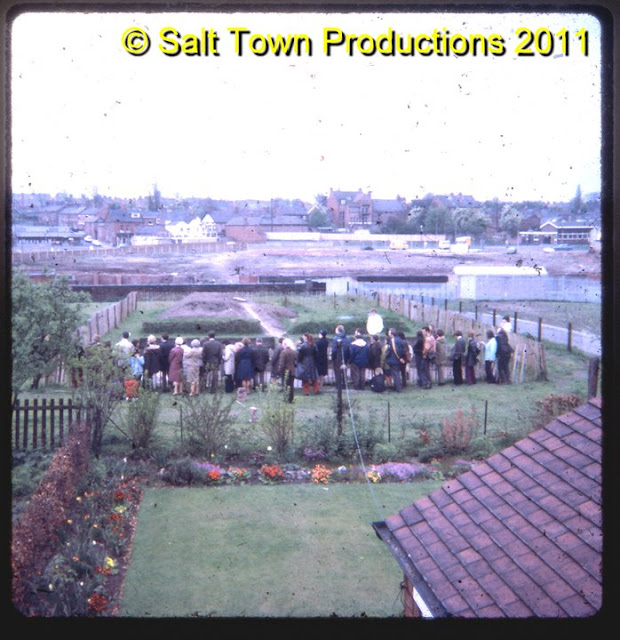 
This is the view from my bedroom window at no. 33 King Street in 1973. The Middlewich Archaeological Society is playing host to other archaeologists as they make a field trip to the dig in the field adjacent to our back fence. Many years later, this would also be the site of the Middlewich 'Community Dig'. In the background can be seen the site of the Seddons Pepper Street Works across the Canal and River Croco. This seemed to remain empty for many years (although the 1975 Inland Waterways Association Rally was held there) until the Moorings was built. If you look carefully, you can see that the Middlewich we know today was slowly taking shape around the new 'Inner Relief Road' (St Michael's Way). The telephone exchange is on the right and the 'Co-operative Superstore (now Tesco Express and the Super Discount store) on the left.
The huge building just to the right of centre is the rear of the former Barclays Bank and its associated flats.

These early Facebook entries, published in the run-up to the launch of our Middlewich Diary blog in June 2011, are all rather vague and sketchy. The object of the exercise was to publish the actual colour photographs via the then still novel medium of Facebook and enabling people in Middlewich and elsewhere else to see them whenever they liked, rather than keeping them filed away for special occasions only.

As always seemed to be the case with these early Facebook entries, more information was forthcoming with the Facebook feedback, which is reproduced below.

Dave Roberts The immaculate lawn in the foreground shows no sign of the ravages of a few years earlier when my Dad, a keen member of the Archaeological Society, dug his own trench there in search of Roman remains. The views of my Mother on this are not recorded. Dad was an early proponent of the idea that the 'Roman Settlement' at Harbutt's Field was much more than that - that it was, in fact, a full-blown Roman fort. And how right he was. The Roman site behind our fence turned out to be the site of an ancient iron works and, for a time, our garage shelves were stacked with boxes full of Roman nails.
.and I think I'm right in saying (real, proper Roman historians might like to help here) that if you draw a line on a map from the end of Brooks Lane (by the Boar's Head) to the southern entrance of the Roman Fort, this would have been the route of a road leading to the fort and lined with iron works, salt works and other industries serving the fort. Our back garden - and Dad's iron works - would have been on that road.

Maureen Condra Nice pics. They brings back a lot of memories. I used to  play dominoes in the Talbot when I was 18. Ha Ha! A long time ago. I love to see all the old pics.

Chris Koons Is that my Nana, there in the maroon/purple & the white hat, standing next to your mum? I'm sure I remember that hat! LOL

Here's a link to the Middlewich Diary version of this posting, with a little more information on the photo and a link to the Cheshire East/English Heritage pdf document explaining some of the background to various King Street digs including the ones of the early 1970s.