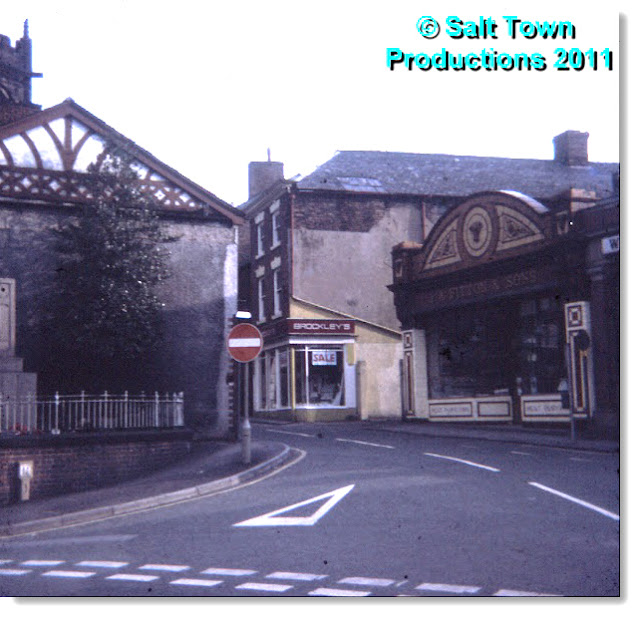 
We're in the very heart of the town today and back in 1969.
On the extreme left is the war memorial in its original position (despite everything, it has never moved very far). The 'W' on the extreme right is, of course, the first letter of WESTMINSTER BANK, outside which we all stood to wait for the North-Western Bus to Northwich, and, to the left of that, is what was once a showpiece; Fitton's butcher's shop, which later became Vernon's. The interior of this 1920s shop was decorated with fine hand-painted Italian tiles which the Middlewich Heritage Society fought hard to save, to no avail. The shop suffered the indignity of becoming a video hire shop and is now (of course) an Indian takeaway.
Efforts have been made to cover up the exterior tiling with cheap painted boarding, which has never worked and always looks awful.
To the left of this now ruined edifice is Brockley's which sold wallpaper and decorating supplies and later moved to premises in Wheelock Street, opposite where Temptations is now.
Note that Hightown was one-way in those days, but 'the other way round'; hence the bus-stop outside the bank.
I suppose it goes without saying that the buildings on the left (with the obvious exception of the church) were sacrificed to make way for first the much-hated 'piazza' and now the 'amphitheatre'.
It's not clear on this particular photograph, but the sign on the butcher's shop says J.A. FITTON & SONS, and it was still in use as a butcher's shop in the 1980s under the ownership of E & G VERNON.
Posted by SALT TOWN PRODUCTIONS at Friday, December 09, 2016

Email ThisBlogThis!Share to TwitterShare to FacebookShare to Pinterest
Labels: 1969, BULLRING THE 1969