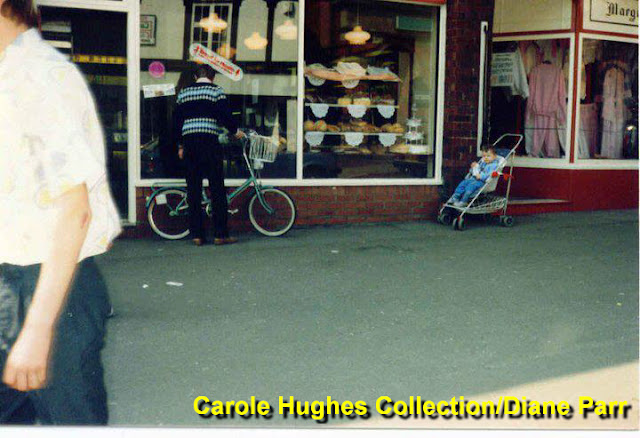 We travel back twenty-five years again for a couple of glimpses of that popular Middlewich institution 'Cynthia's', variously known over the years as 'Cynthia's Patisserie' or, simply 'Cynthia's Cake Shop'. For some reason something went a bit wrong when Diane was taking the picture above and the top part of the shop is missing, so we're unable to see what the shop sign looked like in those days. Perhaps it's a simple case of 'itchy trigger finger'. In the digital age Diane would have simply taken the picture again, after checking it on a little screen, included the shop sign and left out the chap in the white shirt. There's a lot to look at in the picture as it stands, though. If we study the above picture, in conjunction with the interior shot below, we can see that Cynthia's in those days was run on rather more traditional lines than it is now. The window display is festooned with old fashioned paper 'doilys' and the pendant lights also appear to be from an earlier era. This is, perhaps, a little misleading - the shop was only around a year old at the time.
In front of the shop is a 'Chopper' bike*, more usually associated with the 70s rather than the 80s, and the child's trolley outside the babywear shop next door  looks rather quaint when compared with its modern counterpart.

* Actually, as pointed out by John Capper and our most prolific contributor 'Anonymous'(see comments below) it's more likely to be a Raleigh Shopper than a Chopper. An important distinction, of course. No self-respecting 70/80s kid would ruin his street cred by riding around on a Shopper. 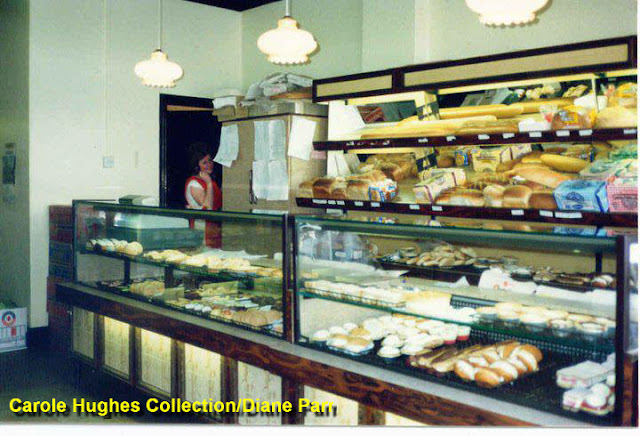 Looking at the interior of the shop, we get a better look at those light fittings and also the heavy duty glass cases housing a selection of 'cakes and fancies' and pies. At the back of the counter are racks holding loaves of bread including some long-lost proprietary brands wrapped in greaseproof paper.On the telephone in the background is, we can now tell you, Andrea Astles (see Facebook comment below). 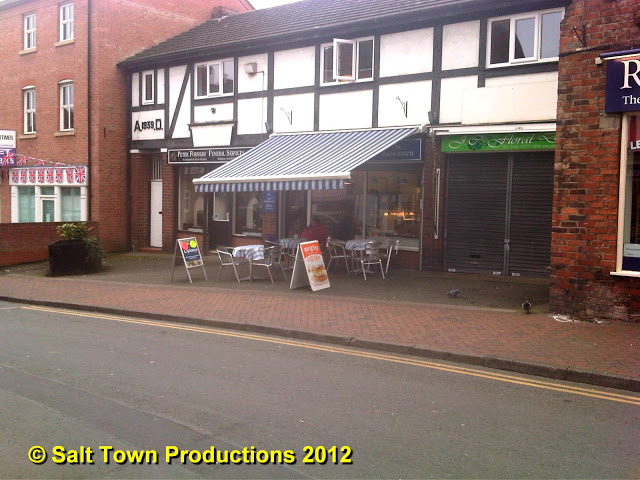 This picture was taken in November 2012 in order to provide a contrast to the ones from the 1980s and you'll notice that, like Diane, we have managed to exclude the shop sign from the picture (although it can be seen in Bill Armsden's picture on The Middlewich Directory (link below)).

UPDATE: To save you the trouble, here's Bill's photo, showing the sign:


The awning which hides the shop's name in our own photo has been opened out to protect the tables and chairs beneath from the Autumn weather (during the Summer it acts as a sunshade). The twenty-first century Cynthia's has embraced the idea of the 'cafe society' and is now a pleasant place for people to stop and enjoy a cup of tea or coffee with the tasty pies and cakes sold within. If Middlewich's main street is ever pedestrianised Cynthia's will, deservedly, be ahead of everyone else in providing this kind of service.

UPDATE (1st December 2016): And now, four years on, even our 'NOW' picture is out of date. Peter Forshaw's Funeral Services, which occupied the premises to the left of Cynthia's, can now be found in Leadsmithy Street. Forshaw's former premises are now occupied by one of the town's many 'beauty' shops
You can find out more about the modern day Cynthia's on our sister site, The Middlewich Directory.

Paul Greenwood: Before that it was a hairdresser's called Headhunters, run by a friend of mine called Lisa Ducket

Geraldine Williams: I think the shop sold Roberts' bread and the shop next door (Margaret's) sold ladieswear. Wasn't it formerly a ZAN shop?

Cliff Astles: Yes, from what I can remember.

Andrea Astles: Great memories of Cynthias - I worked there in 86/87, and that's me on the telephone in the photograph of the interior! I used to make and serve fresh sandwiches in there at the time.

Gemma Collins: Cynthia's - the heart of Middlewich! Couldn't imagine Wheelock Street without it!!!!

Geraldine Williams: Ha! It will always be 'Cnythia's to our family, Dave - homage to a 'Two Ronnies' sketch in which Barker was a local butcher who stepped in at short notice and so had to read the leading actor's part in a local am-dram play. The leading lady's name was Cynthia, but Ronnie B hilariously kept misreading it!

Dave Roberts: Yes, a memorable comic milestone which, at the time, led to many a Cynthia throughout the land being temporarily renamed 'Cnythia', among them being my sister. The 'Cnythia' soubriquet still surfaces occasionally to this day.