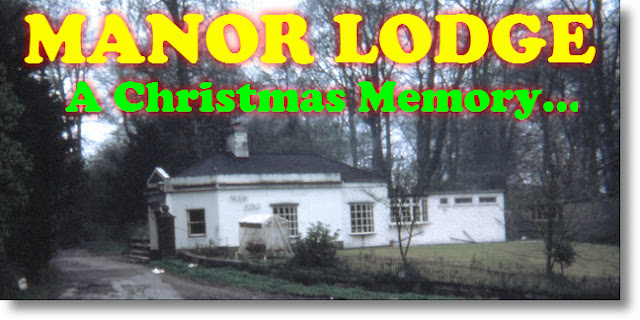 By Dave Roberts
Here's a little corner of Middlewich which hasn't changed much over the years (or has it? See the link below -Ed), and always reminds me of Christmas time because of a particular memory from long ago.
Manor Lodge, just off  Nantwich Road and very near to the Aqueduct which carries the SUC Middlewich Branch canal over that road, stands at the top of the former carriage drive which made its way (and, in a way, still does) through the gateway on the left in a straight line towards Middlewich Manor. 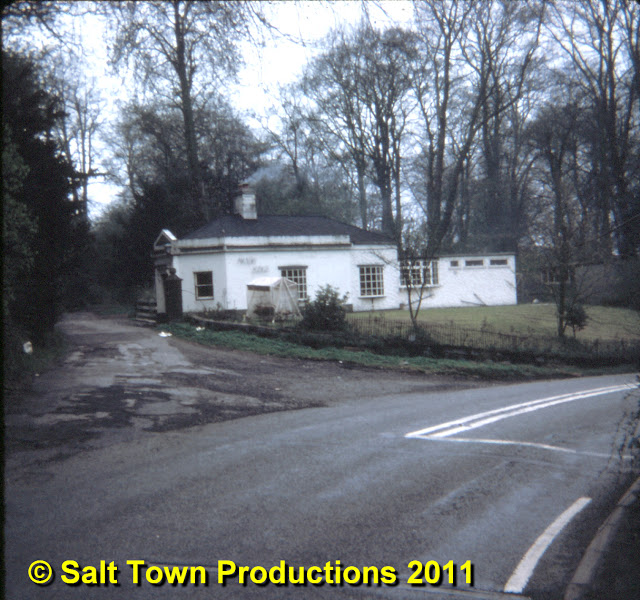 The Lodge is seen here in the winter of 1974. Sometime after this photograph was taken, the gate-post seen at the left hand side of the building fell into disrepair and lost its top. That top,complete with decorative ball, after spending years lying forlornly in the undergrowth, has recently been restored to its rightful position, another one of those little touches which, all put together, make a difference and make the town look as though someone cares (In fact, the saga of the Manor Lodge gate-post was only just beginning. The link towards the end of this entry will tell you more).
The reason this attractive building reminds me of Christmas every time I see it goes back 51 years to 1960 when I was, for a very short time, a member of the Church Choir at St Michael's Church.
As it was the Christmas season, it was decreed that members of the choir should walk all around the town singing carols. I don't recall there being any other motive behind this festive goodwill gesture - there may have been, but I was only eight at the time and wouldn't have been interested even if someone had told me. I don't think we were collecting money for charity or anything like that, just singing carols for the sake of it  because, at Christmas, that's what Church choirs did. And still do, of course.
We duly wandered around what was at that time still a smoky little industrial town singing festive songs to anyone who would listen and eventually, after making our way along Nantwich Road and under the aqueduct, found ourselves at Manor Lodge, where we dispensed more carols in return for mince pies and pop (at that time most likely to be the legendary Tizer, the favoured drink of the youth of the day).
But this wasn't the end of the journey by any means. Our ultimate destination lay at the Manor itself, at that time the home of Mr E.K. Willing-Denton and family.
And so we made our way along that carriage drive. You can still make the same journey today but the difference is that, once you get a short distance along it, the carriage drive turns into Kerridge Close. Walk a bit further and you'll find yourself walking along the footpath of Greendale Drive. Both these modern interlopers are built (more or less) on the alignment of the old drive.
In 1960 it was carriage-drive all the way to the Manor.
In my mind's eye I can still see us making that journey all those years ago, dressed in traditional Victorian costume and carrying those candle lamps on sticks through the snows of December.
But there, of course, my mind's eye is playing tricks on me, as it always does. We weren't in Victorian costume (nor even dressed as choirboys - it would have been a bit cold), we didn't have any lamps, candle or otherwise, and, I don't think it was snowing either. 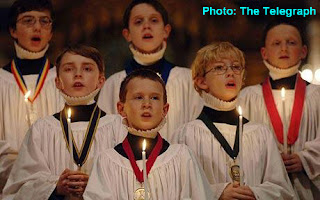 We made our way through this then rural part of the town, passing through what children now call 'Mystery Wood' (there is some dispute at the moment over the correct name for these woods. Some say 'Mystery', some say 'Misty'. In 1960 - I am trying hard not to say 'in my day' - they weren't called anything. They were just 'the woods', and there was a lot more of them. See the comments below from Daniel Preston), and along the tree-lined drive to the Manor itself. 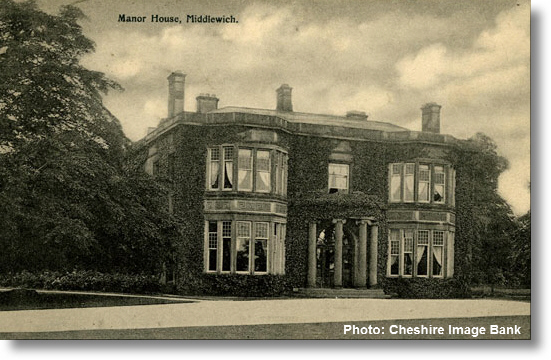 There we were met by the Willing-Dentons who plied us with more festive fare. More mince pies, and more Tizer with, no doubt, cups of tea for the senior members of the choir, if not something a little stronger.
Just a little idle memory, but it still haunts me every time I walk past Manor Lodge, particularly at this time of the year.
The Manor, of course, is now a Nursing Home and the last time I visited it (ironically to do a spot of singing and entertaining) was shortly after my Mother died.
The place had hardly changed at all, but the first thing I saw when I entered the imposing hallway was the door to one of the residents rooms which bore a sign saying DORIS ROBERTS.
This brought me up with quite a start. But that's another story altogether...

Editor's note:  The area may not have changed much, but the Lodge itself certainly has. See this posting

Facebook Feedback (from the 'You Know You're From Middlewich When...Group):

Daniel Preston Having read the part in the story where some dispute is mentioned over the name of Mystery Woods, I can say that that is what we called the woods in the sixties. As noted in the diary, Mystery Woods covered a lot more ground in those days.

Dave Roberts Ah! Other people have told me they remember the name from quite a few years ago, so it must be one of those inexplicable gaps in my education. Others, including Dave Griffiths (see comments) remember the area being known as 'Manor Woods', which would certainly make sense. I spent a lot of time there with my brothers (drinking Tizer and eating Smiths Crisps) when I was really tiny and we lived just down the road at 53 Nantwich Road, but I only ever heard the name 'Mystery Woods' in the last few years. It's an 'official' name, by the way; officers from the dreaded Cheshire East Council have it in their sights and are looking at how it can be 'managed'. Leave it alone would be my suggestion. Or, if it really has to be 'managed', get someone who knows what they're doing to manage it...