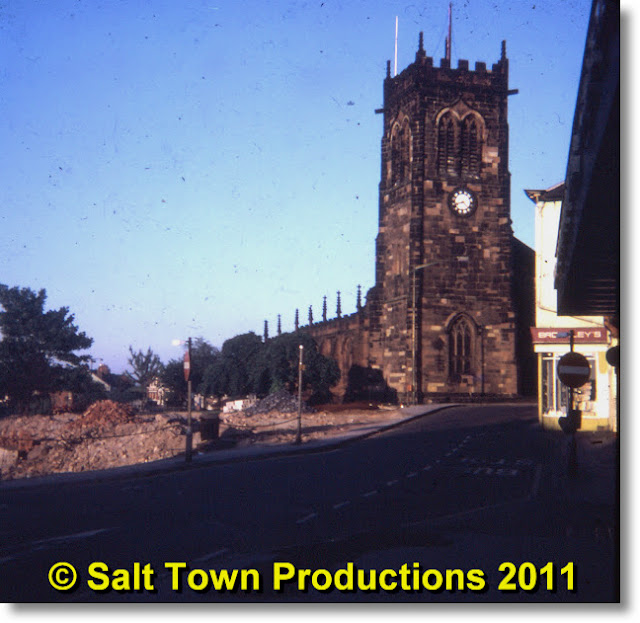 
1972. The Town Hall and the shops have been demolished and the war memorial placed in safe storage. Middlewich waits to see what will replace the old buildings. Whatever it is it must be an improvement. Mustn't it?

Now might be the time to talk a little about St Michael's Church, as seen here (though we will, as you might imagine, be returning to the subject again many times before this series is done).

For a start the old Church clock, installed to commemorate the Coronation of King Edward VII in 1902, is still in place at this time, although its hands have been painted gold. For many years they were black, and this led to a lot of confusion, due to the iron tracery across the clock face, which was also black, making it sometimes difficult to tell the time.

The clock was illuminated by the public electricity supply and sodium street lights were placed behind the clock faces giving a ghostly yellow aspect at night. In fact the whole town centre was lit by yellow sodium lights at one time, giving the whole place a dreary and miserable appearance, particularly in the winter.

The nicest thing about the old church clock was the Westminster Chimes, though in its latter years it would sometimes miss out some of the 'tune'.

The clock was looked after for many years by Freddie Ruscoe, who climbed the tower every week to wind it and regulate it in precisely the same way as the clock in the Houses of Parliament is regulated - by placing coins on part of the mechanism.


When it was time for the clock to retire, its place was taken by a clock which came from Pring's Wire Works at Elworth*, and the dials were replaced by white perspex ones which are quite elegant but, unfortunately, can sometimes reflect the glare of the sun when it's in the wrong position.

The replacement clock is electrically wound and does strike the hour but in a very muted way. I'm not sure if the current clock's hands are the Victorian originals or came with the 'new' clock.

Once the replacement clock was installed, the original one was cosmetically restored and put on display in the church.

The flagpole seems to be a different matter. It disappeared from the top of the church and has never been replaced, which is a great pity.

Most C of E churches display the flag of St George on Highdays and Holidays and it would be nice to see our church resuming the practice. When I asked one of the churchwardens if there were any plans to replace Middlewich's flagpole, I was told that such a thing was 'impossible'.

I find this a little surprising. After all, as I've said before, if they can put a man on the moon...

We welcome any additional information about Middlewich's 'pride and joy', St Michael & All Angels, and in particular any dates relating to the replacement of the Church clock and the weather vane.

Here's the same scene at the very start of demolition 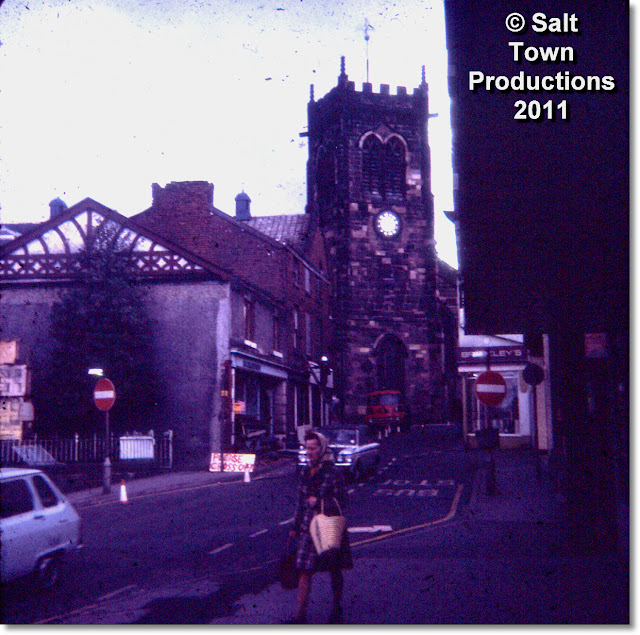 A full description can be found here


*Does anyone know the exact year of the clock's replacement?

This photo, together with the first paragraph of the above description was published on Facebook on the 20th May 2011.

Sharon Mather Like this! The year I was born.

Dave Roberts And twenty years after I was! God, I'm old. 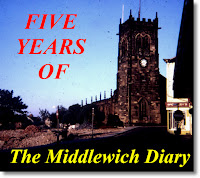