In a fascinating video which will be enjoyed by those interested in railways, canals and the Mid-Cheshire area in general, 'Nigel K' traces the route of the Middlewich branch line by walking down the tow-path of the Trent & Mersey canal, which runs in parallel with it for most of its length. This is an opportunity to enjoy glimpses of the branch line as it hosts trains diverted from the West Coast Main Line. Before too long the whole scene will change as the line is developed to form a new feeder route to Crewe, with new stations at Gadbrook Park and Middlewich.
The 'MIDDLEWICH - WHERE'S THE STATION?' sign shown in our illustration, and taken from the video, is on what used to be the down, or Northwich, platform at the old Middlewich station. It was put there by former member of the original Middlewich Rail Link Campaign, Vernon Perkins, many years ago, and has stood the test of time. Many a passenger on diverted Virgin services, or one of the many enthusiast specials which use the line, will have seen it as their trains make their stately way through the Middlewich Loop. Nigel mentions taking a look at that website, but he will have been disappointed. The URL is no longer being used by the campaign and, the last time we looked, was selling, of all things, weight-loss products. It appears to be completely defunct now. 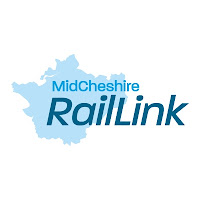