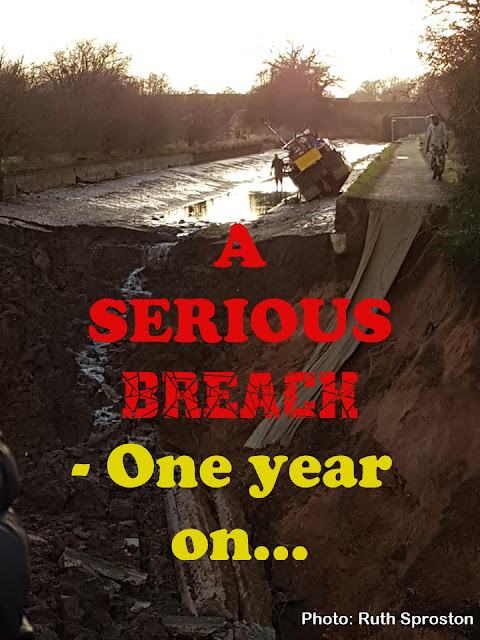 In the early hours of Friday 16th March 2018 catastrophe hit a quiet, semi-rural part of the Shropshire Union Canal's Middlewich branch as part of the bank  gave way directly above the aqueduct carrying the canal over the River Wheelock.

It's an oft-told story and doesn't need repeating here. Our series of 'Serious Breach' features, written shortly after the incident, will tell you all you need to know. And there are further links to various other sites, including those of the Canal & River Trust. They can be accessed via the main link (below).

Here's the link to our original Diary entry :

Our coverage was used by respected railway blogger and author Paul Bigland to counter claims that that old familiar Mid-Cheshire foe, brine subsidence, may have contributed to the collapse, indicating that the ground in the area is too unstable to sustain the projected High Speed Rail line (HS2) which will run close by. Unfortunately there is still talk in the comments on Paul's blog of a 'sinkhole' and of the aqueduct 'collapsing'. I've hastened to correct this with my own comment.

The Canal & River Trust wasted no time in setting to work and repairing the damage. The canal re-opened to traffic quietly and without fuss on the 21st of December 2018, just nine months after the breach happened.

Throughout that time Ruth Sproston was keeping a close eye on what was happening, and has kindly given us permission to use the photographs she has taken chronicling the canal's journey from disaster area back to the restored and once more delightful spot beloved of boaters and walkers alike that we all know. 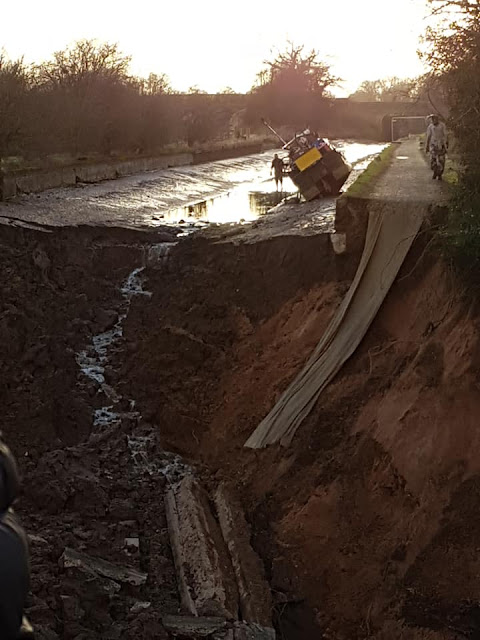 The morning after the night before. The plight of the boater who woke up on Friday morning to find the canal beneath his boat rapidly disappearing in the direction of the Wheelock valley below, was extensively featured on radio and tv news reports, and even in a TV documentary which, unfortunately, saw fit to repeat the widespread fallacy that the breach was caused by a 'sinkhole' in the bed of the canal. If it had been a 'sinkhole' it could only have been on the aqueduct itself, meaning that the structure had collapsed. It was, of course, nothing of the sort. The fact that the canal bank gave way was what caused the problem, and the early 19th century Wheelock aqueduct stood its ground as firmly as ever. 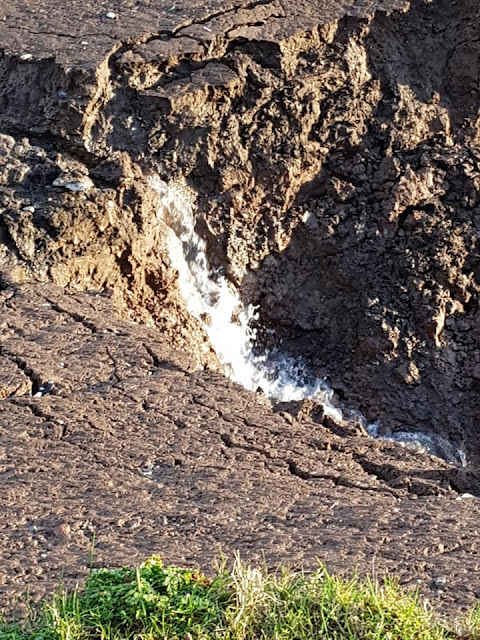 Water from the canal makes its way into the  valley below, rushing through tons of silt and mud into the River Wheelock. 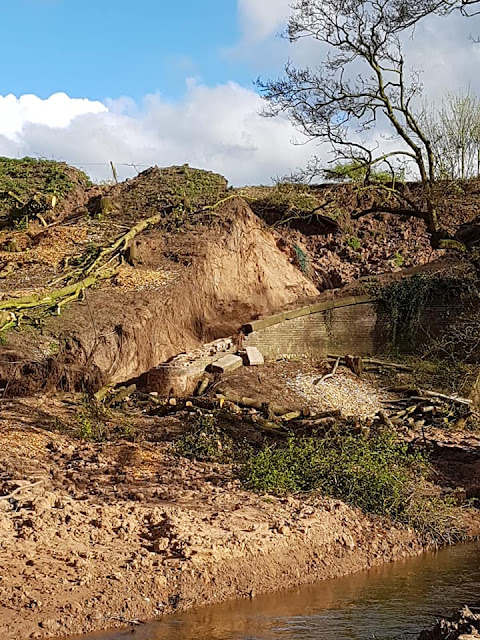 A scene of devastation, shortly after the breach. The only damage to the aqueduct, though, seems to be the loss of a few coping stones from the sweeping, curved buttress which actually served to channel the water from the canal into the river. 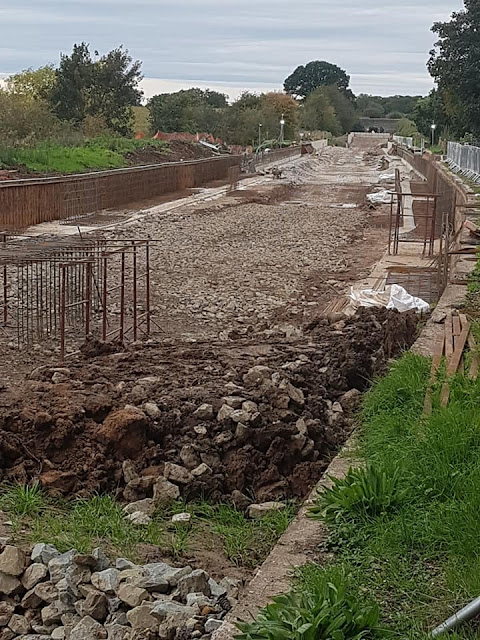 Once repairs were seriously under way, the bed of the canal at this point more closely resembled a roadway than a waterway. An access road was built across the fields from Coal Pit Lane so that materials and heavy machinery could be brought in for the repair work. 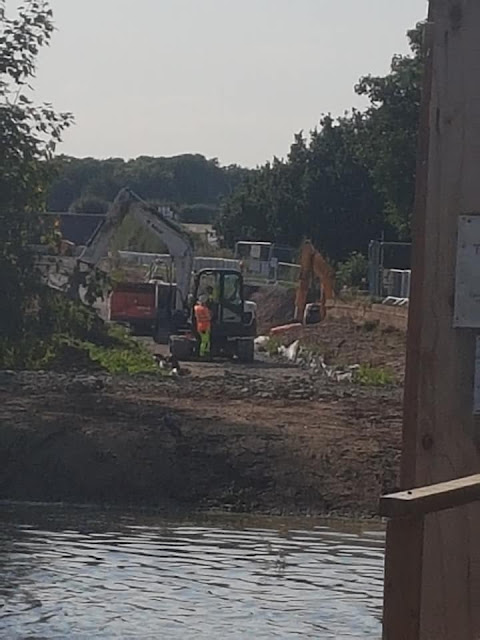 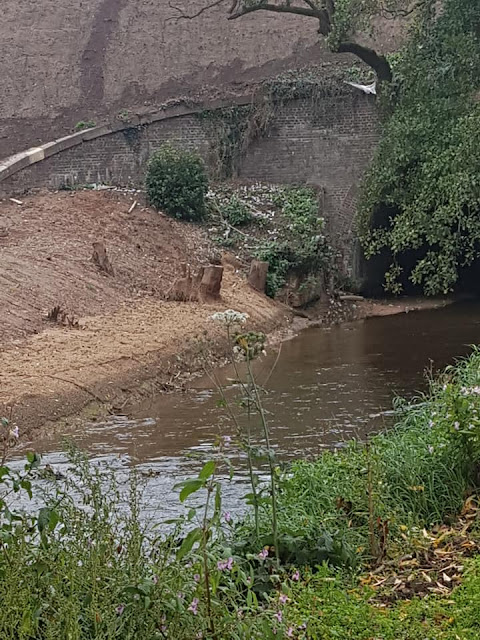 The canal bank and embankment above the aqueduct was re-shaped and re-modelled to hold the rebuilt section of the canal in its appointed place. Many of the trees which once crowded around the aqueduct have been removed during the course of the work. Repair work has been done on that sweeping buttress, and a new white stone stands out like a filling in a row of teeth. Before too long, the driving Cheshire rain and the passing of the seasons will ensure that that stone will weather and look exactly like all the others, making it hard to imagine that anything untoward ever happened here. 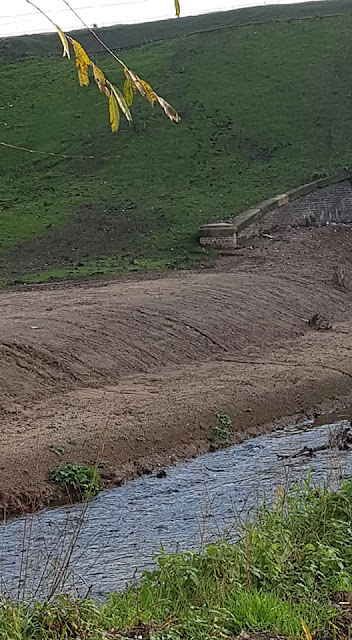 Here we can see that the rest of the buttress has been repaired with what look mostly like the original stones. The bank of the River Wheelock at this point has also been remodelled. 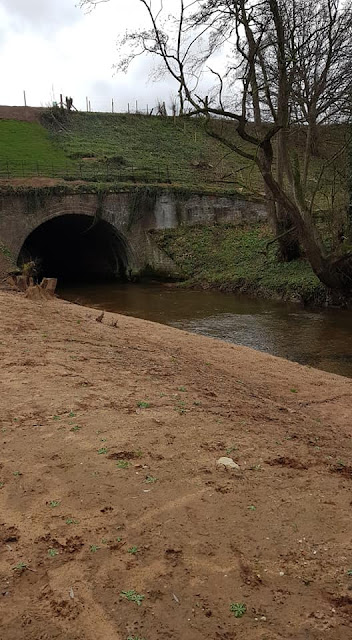 In fact this side of the river now bears a pleasing resemblance to some kind of 'beach' but, no doubt that same Cheshire rain will ensure that it all soon becomes as green as the rest of the area. 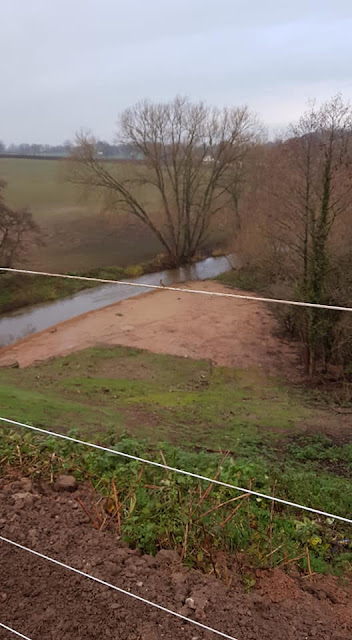 Seen from the canal above, the resemblance to a beach is even more striking. The white building just visible through the trees is Stanthorne Mill. 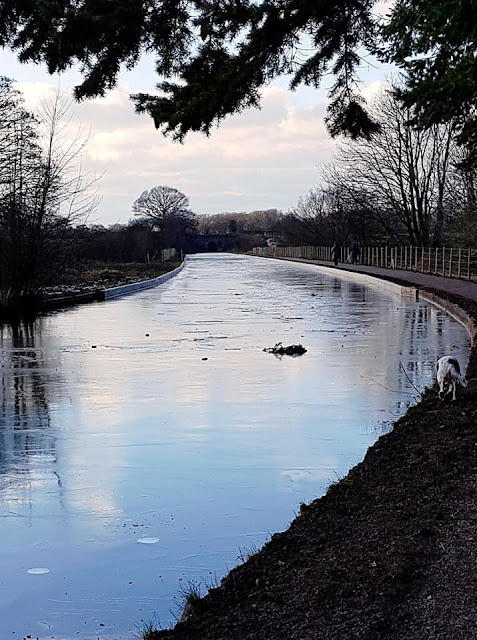 The restored section of canal, shortly after the refilling last December. 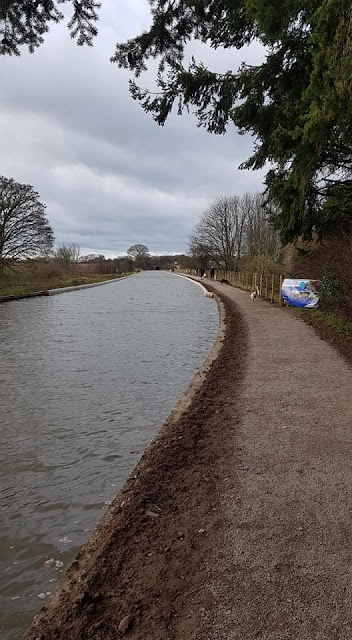 This favourite section of canal is open once more for locals and visitors alike to enjoy. 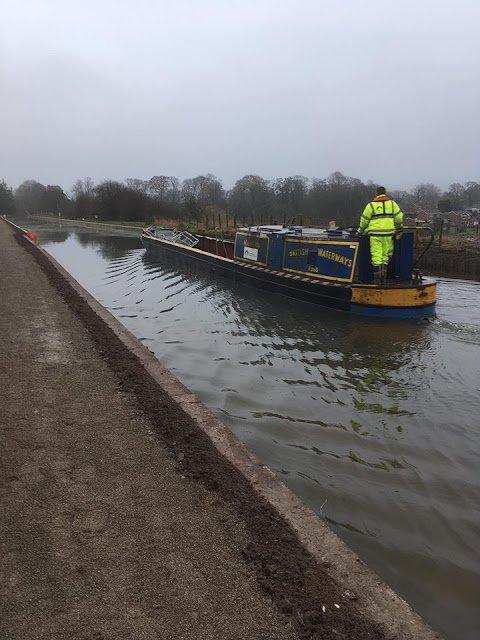 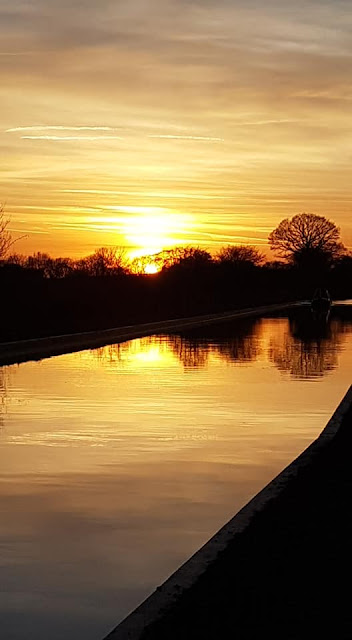 And as the sun sets, Middlewich welcomes back the SUC Middlewich Branch and looks forward to a memorable summer with many boats coming down the 'new' canal ready to join us for the FAB Festival and all the other Middlewich events happening this year. 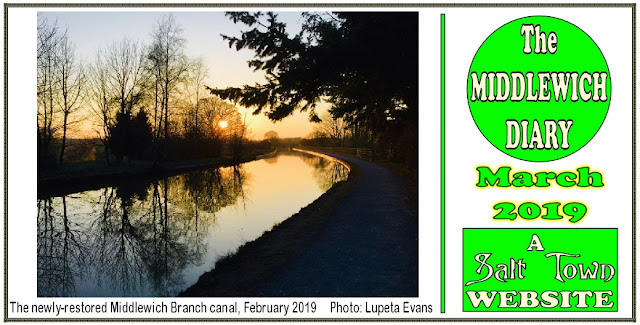 Our March 2019 MD masthead, featuring another beautiful sunset picture of the restored canal, this time by Lupeta Evans.