A PRINCE AMONG MEN COUNTRY 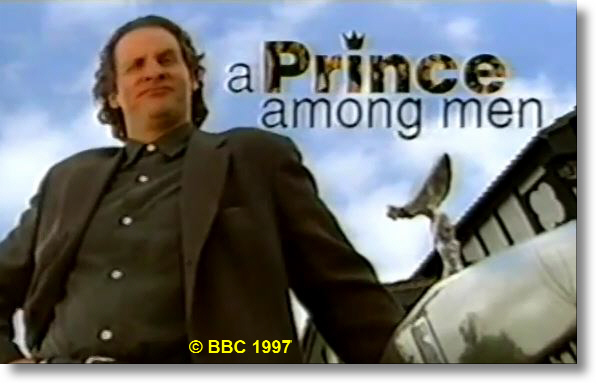 'Of all sad words of tongue or pen,
The saddest are these: It might have been...'
-John Greenleaf Whittier

It could have happened. Who knows?

This area could have been as famous as Holmfirth near Huddersfield, in Last of  The  Summer Wine country or Goathland on the North Yorkshire Moors Railway, the village which played the part of Adensfield in Heartbeat.

Middlewich could have been the centre of a local tourist industry centred on, of all places, Middlewich Football Club.

In the late nineties the BBC made two series of a  A Prince Among Men starring Chris Barrie of Red Dwarf and The Brittas Empire fame.

Chris played a 'former professional footballer who has become an entrepreneur'. He was described as 'completely self-centred and suffering from a massive superiority complex'.

Gary had a beautiful German wife, Lisel (played by Francesca Hunt), who worked as a translator, and other characters included his secretaries Sonia (Samantha Power) and Beverley (Suzie Blake), his personal manager Dave (of course) played by Cliff Parisi, his business manager Mark (Tim Bentinck who was, and still is, also David Archer in the radio serial), and Vince, who was played by Bryan Pringle.

It was the role of Vince which  was the key to how Middlewich became involved in the making of this show.

Vince was the steward of the local football team's social club  and the premise of the show hinged on the idea that, by helping the local non-league team which had given him his start in football as a schoolboy, the arrogant Gary Prince would be 'brought back down to earth', in particular after being subjected to Vince's homespun philosophy over a pint or two (or, more likely, a G&T or two) and emerging as a better man. Such was the depth of Gary's gratitude that he'd paid for the club's new pitch, changing rooms and social club.

The production team were looking for a suitable football club at which to record the outdoor football and indoor social club scenes and the late (and still much-missed) John McAteer, a man who helped Middlewich in the short time he was with us more than most people will ever know, offered the use of Middlewich Town's pitch and social club (both of which had just been massively upgraded and re-furbished due largely to his own tireless fund-raising efforts).

So it was that when Gary Prince dropped in for a homely chat with Vince
it was at the Middlewich Town FC Bar they sat and chatted.

And when Gary went outside to cheer on the local non-league team, it was on Middlewich Town's touchline that he was standing.

Sadly for all concerned (and particularly for Middlewich's chances of being promoted to the Last of The Summer Wine league) the series was a flop.

Despite Chris Barrie's acting skills Gary Prince mostly came across not as arrogant-but-funny, but as just plain arrogant, and the show ended after just two series.

We'd love to hear from anyone who was involved in the making of the programme, particularly if there are any other photographs in existence.

But just imagine what would have happened if the show had been a smash hit. We'd all be drinking in Beverley's Bar, eating in Sonia's Snack Bar and having our pictures taken next to big signs saying 'Welcome To Middlewich in Prince Among Men Country!'

When this Diary entry cropped up once again, I thought I'd have a look at YouTube to see if anything of A Prince Among Men had survived.

To my surprise the first series is there in its entirety on the 'Chris  Barrie Fans' YouTube channel.

So obviously Chris's fans are not in any way ashamed of this series. In fact it seems that quite a few of them have been waiting to see this series again for several years.

I don't imagine Chris Barrie is at all ashamed of the series, either. He played the part of Gary with his usual flair, and could hardly be held responsible for the lack-lustre scripts.

And the programme was, after all, produced by the BBC to the Corporation's usual very high standards.

Looking at episode one again, I have to say that it's far from as bad as I remember it.

Perhaps the truth is that A Prince Among Men suffered by comparison with Chris's other smash hit series Red Dwarf and The Brittas Empire. Both hard acts to follow.

See what you think.

Here's a link to episode one.

As I say, the other episodes in series one  are all also  available to view.

See if you can spot those Seddon Street/Finney's Lane locations in the Middlewich of twenty years ago.

A PRINCE AMONG MEN - EPISODE ONE


Jim Moores I remember this, Dave. I watched the first episode in the Princes Feathers in Winsford. We all sat glued to the set because it was shot 'up the road'. I think we got the dominoes out well before the end...

Chris Jones  Thanks for the kind words about John, he is still sorely missed.

Paul Williams A series too far for Chris Barrie.. A triumph of negotiation from an old friend to get the show filmed in the Athletic bar. Miss you John.