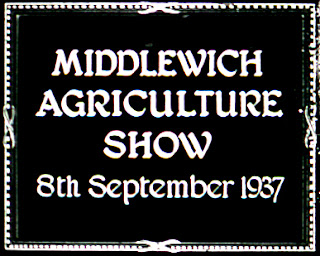 Middlewich Show 1937 is just one of a small collection of films made in the 1930s by the Mid-Cheshire Amateur Cinematography Society, with members based mainly in Middlewich and Northwich. Prominent members were my Dad, Arthur Roberts, and my Uncles Bill Oakes and Clifford Ridgway.
Also involved were the Eachus Brothers, who ran a photographic shop in Northwich. In fact one or two of the Society's films were donated to the NW Film Archive by the Eachus family and now sit on the shelves alongside our own donated films.
Up until the early 1980s the 16mm films were in the possession of Uncle Bill who then lived at 'Three Willows' in Mill Lane off Nantwich Road (a beautiful house with a terraced garden sweeping down to the River Wheelock, just downstream from the weir we were looking at in this diary entry)
Occasionally, on high days and holidays during my childhood, someone would get hold of a 16mm projector and we'd all be able to see something of our local area as it was in the 1930s, and what our relations and their friends looked like in their younger days.
When Uncle Bill's wife, Winnie, died he decided to move to Knutsford and, while clearing his house, asked if there was anything I'd particularly like from the large pile of 'junk' destined for Middlewich tip.
Believe it or not, among the 'junk' was the collection of 16mm films we'd enjoyed occasionally for many years.
Thus I was able to save them for posterity.
The films then entered a 'second life' as a Middlewich attraction. I used to borrow a 16mm projector from the High School and show them at various venues around the town in aid of charity.
This, of course, was long before the days of DVDs. Even video was only then coming into fashion and there was no practical way these films could be shown in public other than in the traditional way, 'live' with a projector.
A very nerve-wracking enterprise, I can tell you.
Even in those days the films were getting on for fifty years old and becoming increasingly frail with each passing year.
Any old-fashioned film projectionist will tell you that a film can only be shown so many times before you start to have problems, with broken splices, torn perforations, scratches and burned-out frames (where the film has stuck in the 'gate' and been melted by the heat of the lamp).
So, eventually they had to 'retire' before they fell to pieces altogether.
Local historian Allan Earl, who knew all about the films, approached me and asked if I would be prepared to donate them  to the North-West Film Archive at Manchester University where they could be conserved and looked after properly.
A name had to be found for the collection, and we dubbed it The Roberts Collection, that being as good a name as any, and Allan took them to Manchester so they could live out their well-earned retirement among the rest of the North West's filmed heritage.
Part of the deal was that two VHS video copies of the films should be made; one for our family, and one for the Middlewich Heritage Society.
Those low-quality videos are the source of the films from the Roberts Collection you see on Youtube today. One day we hope to be able to show them to you in better quality in the form of DVD files.
Incidentally, in the days when ITV, in the form of Granada Television, used to produce regional programmes for the North-West, theywould phone occasionally to ask for copyright clearance for sequences from these films for use in  a programme called The Way We Were, narrated by Stuart Hall.

You've been very patient, so now here is our main feature:

A couple of years ago I was approached by the British Film Institute asking for permission to include Middlewich Show 1937 in their online Britain On Film series which features films from all over the country depicting daily life in Britain through the years. The institute also refers to this series as 'the National Archive'
And that is how our town came to be included in this fascinating online archive and how you can enjoy this particular film, at least, in something like its original quality.

(Note: The strange, arabesque illustrations at the very start of this version of the film were bits of old scrap 16mm film fished out of a bin at Granada TV in the 1970s)