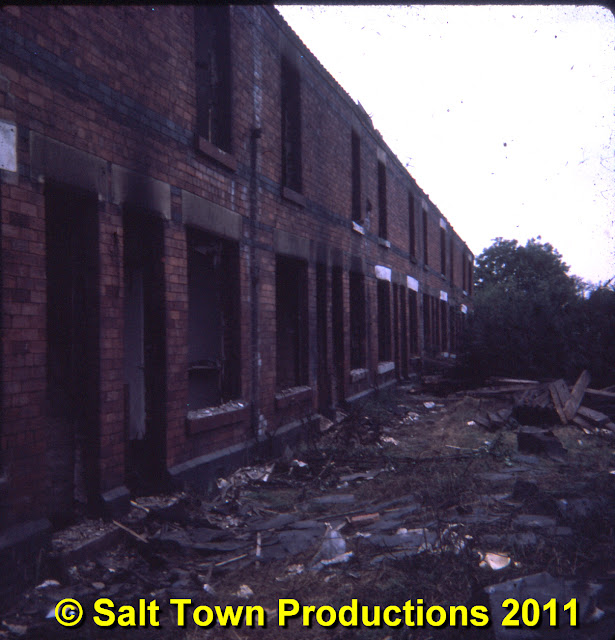 Long before the days of Waterside Way, the modern housing development which occupies part of the boggy land lying between Croxton Lane and the Trent & Mersey Canal, a short terrace of houses stood in the middle of a field in the area, looking rather incongruous, almost as though it had been dropped there by mistake.

The houses were of traditional Victorian design and had 'front' doors in the usual fashion, although there was a footpath rather than a roadway for them to open onto.

This was 'Seddon's Row', built by the local salt manufacturer to house some of their workers.

Although the area had been used from time to time for making salt, as we've seen here, and Ralph Seddon's Kinderton Works were a short distance away across the canal and River Croco, it is not entirely clear which of the works the houses were intended to be associated with.
Possibly the Seddon family just owned the land on which they were built (which was, incidentally, much closer to Croxton Lane than it was to the canal).

With regard to the above photograph, when I think back on the circumstances in which it was taken I remain convinced that, when challenged by the demolition gang and asked what I was doing there, I replied that I was from 'the Heritage Society'.

But this can't possibly be true, because we didn't start the Heritage Society until eleven years later, in 1985. A clear warning for us all not to take what we think we know, or remember, as fact. The human mind, and memory, can play tricks on us all.*

*Thinking back on this, I'm wondering if I told them I was from 'The Council'? They'd have to be a bit dim to swallow that one, as my camera was a Kodak Instamatic - not at all the sort of thing you'd expect an official Council photographer to be using!

Here's a view of Seddon's Row from Mike Jennings' collection which shows the setting of the houses. 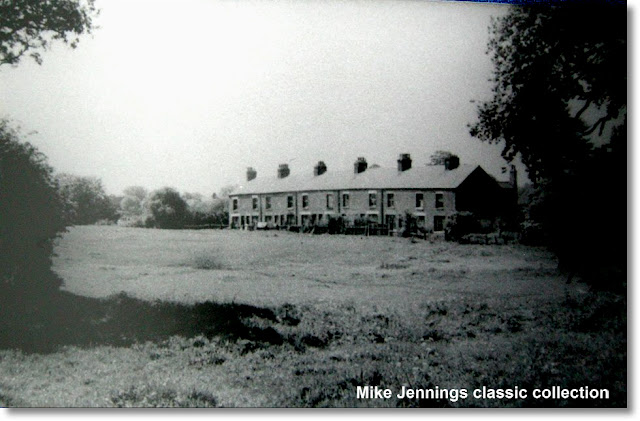 This photo attracted quite a lot of interest on Facebook.

Mike Jennings asked if one of the end houses in the row had been a shop at one time, and his mother Mary replied that there was no shop in the row.

However Peter Dickenson, who said he had lived in Seddon's Row (his house can be identified by the fourth window from the right), told us that there had been a shop in the area, 'approximately where you turn for Waterside Way and Meadow View'.

Ron Evans asked if the photo showed the front of the houses as viewed from Croxton lane and Peter replied that it did, in fact, show the row as seen from the canal side over a field belonging to his grandfather.

So not only were the houses in the middle of a field, they also faced 'the wrong way ' or, at least, in a direction opposite to what you might expect.

Perhaps there were plans for more housing on the site, and a roadway in front of this row?

Ron Evans also reminded us of the existence of a large 'pond' between the houses and the canal where he used to go to catch frogs!

In response to another query from Mike Jennings, Peter told us that Hector Davies lived in the second house from the left.

Here, from Facebook, is Peter's partial recollection of the names of the  families living in Seddon's Row when he lived there.

'From left to right (as far as I can remember) it was: Farrington, Davies, Carter, ?, Bratt,?, ? George Dickenson (my Dad), ?, Rex Dickenson, Frank Gaffney.
If anyone can fill in any gaps please don't hesitate to get in touch!

Ian Buckley says: 'My wife tells me that her father's family lived in one of the houses. Surname Clarke, forenames Fred, Frank and Bob. There were also two sisters, but their names have been forgotten'.

One final note: Although I refer to this row of houses as 'Seddon's Row' and have always, almost without thinking, given it that name, this was never the 'official name' of the row.
As Peter Dickenson confirms, these houses were actually part of Croxton Lane, and the house where he lived was simply '28 Croxton Lane'. In fact, he can't ever recall the houses being referred to as 'Seddon's Row'

Similarly, there's a row of houses not too far away in Webbs Lane which was always called 'Yoxall's Row' and was owned by private landlords Mrs Yoxall and Mr Henshall (Mr Henshall was actually a near neighbour of ours in King Street in the 1960s).

The Middlewich UDC bought this row of houses in the late 60s/early 70s and took them into their council house stock.

As relief rent collector it fell to me to collect the first 'council rents' from the tenants, many of whom complained bitterly at the vastly increased amount they were asked to pay.

From memory the increase was something like 100%. They'd been paying about 50p (ten shillings) per week and the council were charging them just short of  £1*

It was all a long time ago.

Certainly the highest weekly amount I can ever remember collecting from any council tenant before I left the council in 1972 was £3.50.

Now these houses are just a part of Webbs Lane and I'm sure that almost no one except me can ever remember their past lives as part of 'Yoxall's Row'.

The name has passed into history and so, too has 'Seddon's Row'.

In the latter case, of course, even more completely. It's been wiped off the face of the earth.

*actually my failing brain has got the story slightly wrong. The rents first 'shot up' to 10/- and it was only after the council carried out structural improvements that they reached the astronomical heights of 19s 6d. The Yoxall's Row story is told here.