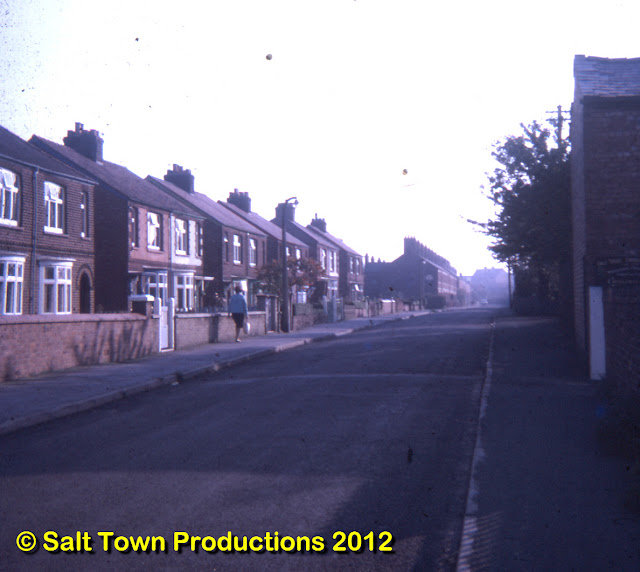 by Dave Roberts
Usually, when looking back on the colour slides I took of Middlewich in the late 60s to mid 70s,﻿ I have a pretty good idea why each one was taken.
It was a time of great change in the town as the old salt works closed down and were demolished to make way first for weed and rubble  strewn waste grounds and then, slowly but surely, for new developments such as The Moorings.
Information about what was going to happen, which buildings were going to be demolished and which long-standing Middlewich scenes lost for ever to new road schemes and so on, was hard to come by in those days before the internet.
Our sole source of information was the  local press which, then as now, seemed more interested in telling us about events in neighbouring towns than in what was happening here.
But most of the time, it was quite easy to work out what to photograph.
Once we knew that the old open pan works were going to be knocked down; that Kinderton Street was going to be radically altered, and that, most dramatically of all, St Michael's Way was going to be ploughing its way through the town from Chester Road to Town Bridge, the list of things to be photographed was written for us.
A similar period in our town's history is approaching now as the Supermarket Wars break out all around us*. It's unclear at the moment what the outcome will be but big changes are coming and we're in the fortunate position of being able to chronicle those changes for posterity almost as they happen.
All of which is what my old English teacher rightly referred to as 'waffle', pure filler inserted here so that I can put off the inevitable moment when I have to come clean and tell you that I have no idea why I took the above photo of Webb's Lane forty-three years ago.
The houses shown here were not being threatened by any road schemes; no supermarkets were planned to take their place and, as far as I know, no one was proposing to bulldoze them in order to build a new leisure complex/bowling alley/multi-screen cinema.
I haven't checked recently but I think this row of semis is still more or less the same now as it was then, barring the odd replacement window or new front door (not that you can even see any front doors in this shot ,of course) and the only claim to fame they have is that one of them is now home to Michael 'Trampas' Woodbine.
The interesting houses are way off in the distance, centre right. Yoxall's Row, owned by Mrs Yoxall and Mr Henshall, was a terrace of rented houses which the Middlewich UDC took over round about the time of this photo, making the people living there instant council tenants.

It was my job, as the council's very young (17) stand-in rent collector, to go round there armed with Kalamazoo Rent Collecting System clipboard and leather money bag to collect their very first week's rent, only to be met with a lot of disgruntled tenants complaining about their rent 'shooting up' to 10/- per week. They didn't know how lucky they were.
Once the council's improvements had been carried out (involving, among other things, the removal of those tall chimneys) their rent 'shot up' once more and they had to pay 19/6d a week.
But Yoxall's Row, quite obviously, was not the reason for my taking this slide.
The most likely explanation is that this was the last shot on the reel (or, in the case of Instamatic photography, cartridge) and I wanted to get the film off to Kodak for processing and so took this gratuitous shot to make up the numbers.
Professional photographers, many of whom used 35mm Kodachrome almost exclusively  for colour, would get the few shots they wanted and then wind the expensive film through the camera, wasting up to about 80% of it.
But then, most of them probably weren't paying for the film as I was.
For we mere amateurs film was expensive, every exposure counted, and this sort of picture was the nearest we got to a 'throwaway shot'.

* Update (July 2017) The 'supermarket wars' never happened. The main protagonist, Tesco, bought up vast swathes of land in the centre of the town in order to build a Mega Store. They then had a re-think, called the whole thing off and left us with no real increase in shopping facilities, but a lot of ramshackle properties right in the heart of town.

Geraldine Williams I love this clever pic. I presume it's an early morning shot from the shadows, and the solitary figure and absence of cars and mist in the distance makes it very atmospheric. Using up the film....ha! I think Phil and Dennis Hambley would still have been living in one of those houses on the left, and just out of shot is the bungalow owned by Mrs Horsfield. The house at the far end of Yoxall's Row used to be tenanted by the Gallimore family. He was an RAC motorcycle patrolman and also a cousin of my Grandmother's (she of postcard fame).
On the opposite side of Webb's Lane, towards Lawrence Gardens, lived a lady (Noden?) who delivered milk on a tricycle with a lidded container on the front, similar to those once used by ice-cream sellers.
Michael Tully Looks to me like a view from the Big Lock end with Johnny Fahy's place to your right. That can only mean it was before Trampas moved in just to the left hand side. You were probably photographing a neighbourhood that had to get used to some raucous Penny Whistling in the depths of the night. I'd entitle it "The calm before the......"

Kieran Tully ‎"The storm" that included him knifing my brand new red Wembley football in the late 70s! I thanked him for it in the late 80s in the Narrow Boat!
Posted by SALT TOWN PRODUCTIONS at Friday, January 27, 2012