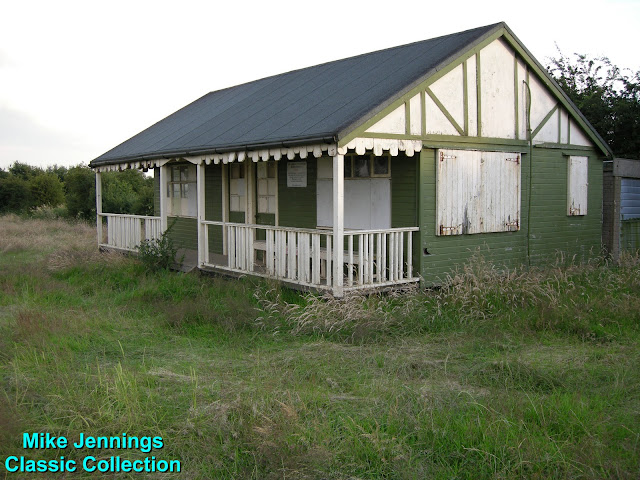 Mike Jennings writes:
﻿I took this photo of the sports pavilion on the RHM Football Ground in July 2007. At that point it was in a poor state of disrepair and Townsend United, who were the last team to play there, were in the same state as the building - on their way out!
I have Townsend stories and records going back to their formation in 1971, when they were run from the Cheshire Cheese.
In the summer of that year the Cheshire Cheese formed a football team. At the time they had enough players to make two teams, but only one was registered with the WInsford Sunday Football League. The Crown also entered a team at the same time, but at the last minute had to withdraw.
The League asked my father, John Jennings, Cheshire Cheese FC Manager,  if he could find an extra team.
He suggested it should be called Cheshire Cheese B, but the League rejected this, so he entered them as Townsend United, as the Cheshire Cheese is situated at what was known as the 'Town End' area of Middlewich.
I hope this information is of interest, and I will be able to dig out more about amateur football in Middlewich since the early 1970s.
© Mike Jennings 2012

Editor's note:
Many thanks to Mike. We look forward to more from the Mike Jennings Classic Collection in future Diary entries
Mike's mention of the Winsford Sunday Football League brought back memories for me because, many years ago, I was myself involved in local football administration.
The Kings Arms Hotel had a team in the Winsford League in the 1970s, given the rather grandiose title of 'Red Star Kings Arms FC', and, for some reason which I can't, after all these years, remember, I was first their treasurer and later their secretary. We were forever being threatened with expulsion from the League, mostly because certain members of our team were prone to settling disputes with fists (and the occasional boot) rather than reasoned discussion.
Our manager was Reg Bunn and he and I made many trips to Winsford to plead with  League administrators and Highly Important County Officials not to chuck us out following some transgression or other.
We even managed to get one of these crisis meetings scheduled for an evening when Liverpool were playing at home in some very important cup clash or other, and officials sat and fumed while we put our case for leniency forward and the minutes of precious match play ticked away.
You can imagine how popular that made us in Winsford, but we lived to tell the tale.
What I'm trying to work out is, given that I have no interest whatsoever in football (or sport of any kind), what I was doing there in the first place.
Dave Roberts, Editor.
Michael Tully Says:
Remember it well. Played there on Sundays and trained there in the week.
Only one shower was any good. We had that as the home dressing room/ Great memories of great football people. Peter Mc, Ken Metcalfe and alike Andean to name a few.
Ken was diagnosed a broken ankle as a twisted knee! Genuine people who turned up rain, sleet or snow. Played with some good lads up there too. Ginge, Kevin Penny, Tank, Kip, Torch, Buzzer, Doddy, Mylsey, Neil Mc, Zues, the other two Buzzers, Wilf, Cleese, our kid, Ged, Rhino and many more.
Didn't realise what great nicknames they had. Played against soem great teams and lads too, and then into RHM Club for a good laugh. Whenever I go past I remember them all fondly. Great days.
Kieran Tully I played against John Bishop on there three weeks on the spin. RHM were not a great side then, as Saxons beat us 10-0, 9-0 and 8-0. Bishop scored a bucketful, along with Mike Heywood. Happy days, though. Jake was manager at the time, with Mylsey his assistant. Great laugh!
Michael Tully No wonder he ended up in comedy!
Carolyn Nelson Do you remember Sutton Rangers? Great bunch of lads, and my brother managed them. Best team going at the time. Played their home matches down Sutton Lane.
(from the 'You Know You're From Middlewich, When....' Facebook Group)
Posted by SALT TOWN PRODUCTIONS at Tuesday, January 24, 2012