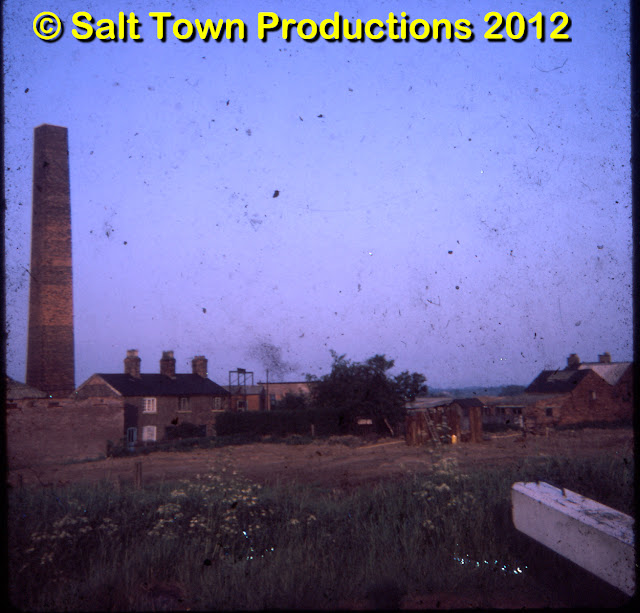 by Dave Roberts
Here's another Middlewich Diary entry which was going to be ever so simple.
A nice, semi rural, almost idyllic picture of some cottages next to a salt works. But unfortunately my eye fell on the curious building with a gantry on top of it next to those cottages.
We're in Brooks Lane back in 1970 and we're standing on the topmost of the three Brooks Lane locks on the Trent & Mersey Canal. Out of shot to the left is that strange right-angled turn in the canal, after which it drops down through the remaining two locks to town centre level. Out of shot to the right is the old ICI Club (now the Middlewich Community Church).
What's immediately noticeable is the still semi-rural aspect of Brooks Lane at this time, with what appears to be a smallholding of some kind to the right of our picture.
The picture was taken before ERF moved its spares and repair facilities to Middlewich from Sandbach, a condition of which was the upgrading of Brooks Lane to take heavy lorries. Crucially, it was this that led to the creation of the 'Brooks Lane Industrial Estate' and the industrial units which are now all over the entire area.
On the other hand, it can hardly be said that Brooks Lane was free from industry before the early 1970s. Very far from it. It was the home of salt and chemical works for a great many years and the evidence is here for all to see.
On the extreme left is one of the chimneys of Seddon's Salt Works, incredibly close to two cottages. We often hear the phrase, 'living in the shadow of the local factory', but it's quite rare to see the idea demonstrated so vividly.
To the right of the cottages is something very interesting indeed - a building which I at first took to be Murgatroyd's Brine Pump no 1,which we've looked at before. Now, I'm not so sure.
This pump,or, more properly, pumps, which still sit over the brine shaft discovered by Murgatroyd in 1889, supplied high quality brine to the Murgatroyd's open pan salt works which stood close by until 1966 (in fact, had the picture been taken four years earlier, the Murgatroyd's works and its four chimneys would have dominated the background).
The brine pump building owes its survival  to the fact that in 1949  additional pumps had been installed to pump brine, via the 'brine line' which ran (and still runs, though in a disused state), alongside the nearby railway line from Brooks Lane to the Murgatroyd's Works at Elworth, where the company ran a vacuum salt plant and also extracted chlorine gas from common salt from which various chemicals such as hydrochloric acid could be produced.
More on this  can be found here and here.
Brine pumping ceased in 1977, but the building and three electric brine pumps have survived and, it is hoped, will be preserved as an important part of Middlewich's heritage.
But is the building shown here with a simple gantry above it the brine pump building in question? The building which exists today has a much taller and more elaborate gantry on the top of it. One possibility, of course, is that the building and gantry were altered sometime during the seven years between this picture being taken and the building falling into disuse, but this would seem to be very unlikely. And I have a niggling feeling that the brine pump building was (and is) a little further over to the left and closer to the railway line. So if this is not the brine pump building, what is it? If it is not a brine pump, or a building associated with brine pumping, why was it not demolished in 1966 along with the rest of the salt works (and, indeed, the building to the right of it - see below)?
I'm hoping that Kerry Fletcher of Middlewich Town Council, who kindly supplied some of the information on the brine pump which we've used in this and earlier Diary entries might be able to point us in the right direction. 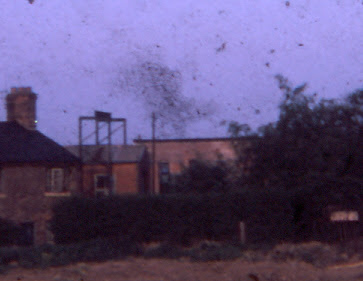 To the right of this mysterious structure  is another building, long since vanished, which looks to me very much like the building shown here: 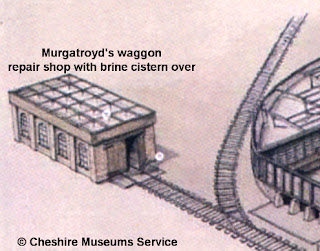 This drawing is taken from a Cheshire Museums Service illustration of the Murgatroyd's open pan works (not, unfortunately, including the brine pump building) which appears on page 37 of 'Wych & Water' (Middlewich Vision Canal & Salt Town Project 2009)* The brine ran from a large tank on top of the works' waggon repair shop to the salt pans. Quite why this building (if it is the one in the illustration) should have survived, devoid of its brine tank, four years after the works was closed and demolished, is unclear. Perhaps it was retained for operational reasons - i.e. it may have contained pipework necessary for the pumping of brine to Elworth.
* Copies of this illustration, in a large format, are (or were) available from the Weaver Hall Museum (formerly the Salt Museum).
So there we are - another mystery to be looked into...


Facebook feedback:
Daniel Preston: I remember there was a smallholding down Brooks Lane, a small farm. There was also a car scrapyard complete with junkyard dog in the 1970s. The scrapyard may have taken over from the smallholding as, to my memory, it was similarly situated.
Andrew Tomlinson: This is one for my mother - my grandparents ran the old ICI Club for years.