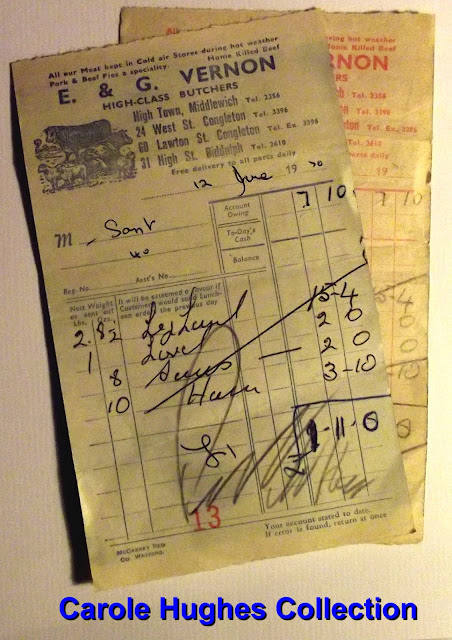 by Dave Roberts
From Carole Hughes' collection of Middlewich memorabilia comes this reminder of the time when our town had one of the finest butcher's shops in the area, before the march of progress and some heartbreaking vandalism wrecked it forever in the 1980s.
The story of the unfortunate end of this Middlewich institution is told in The Butchered Butchers Shop, but here is a reminder of happier times, just prior to decimalisation of the currency, when Vernons were keeping up the old standards and traditions of the former Fittons butchers shop on Hightown.
Even the bills had a pleasingly old-fashioned air about them, with assurances such as
All our Meat kept in Cold air Stores during hot weather,
the promise of
Free delivery to all parts daily
and the delightful plea:
It will be esteemed a favour if Customers would send Luncheon orders the previous day
- beautifully phrased, and typical of the old-world courtesy observed by shopkeepers until rampant consumerism started to get the better of us all, not too long after this bill was issued.
The weights of the goods sold are, of course, resolutely shown in pounds and ounces (as, remarkably, they still are today. The British swallowed decimalisation with scarcely a murmur, but it was a different matter when it came to weights and measures. Officialdom seems to have just about given up on the issue and, though we tolerate all those litres and kilos and so on, we still insist on having our weights and measures displayed properly as well).
Having shown myself in past Diary entries to be no great shakes at deciphering these old bills, I'll declare myself open to correction on the details of the goods Mr Sant (or, more likely, Mrs Sant) bought forty-two years ago,but here's what I think they were:
A leg of lamb (2lb 8 1/2 ozs) at 15s 4d
1lb liver at 2s
2oz sausages at 2s
and 10 oz ham at 3s 10d
And isn't it amazing how those of us who remember the old pre-decimal currency can still add up in 'old money'and still do so whenever we see a bill like this...
So it's 10d, add 4d, add another 10d that's 24d - that's 2s, so carry over into the next column. 2s add 3s, add, 2s, add another 2s, add 15s, add 7s - that's 31s, so put down the 11s and carry over the pound.
That'll be £1 11s 0d. Thank you.
Posted by SALT TOWN PRODUCTIONS at Monday, January 30, 2012