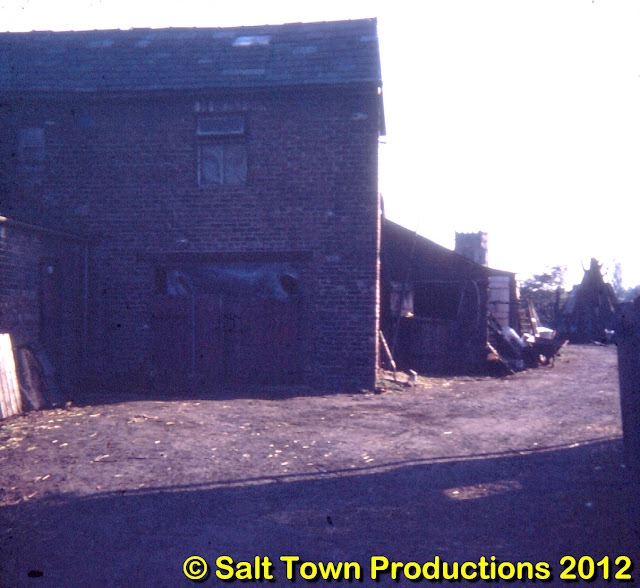 This slide was taken at exactly the same time as this one, and will illustrate how a change in viewpoint can make a big difference. We're looking once again at Moreton's farmyard and the large building dominating the left hand side of this slide can also be seen on the left of that earlier slide.
Seen from this angle the farmyard looks almost tidy, but the earlier shot shows that, at the time, this was far from being the case.
St Michael & All Angels church tower can be seen just above the roof of the little lean-to centre right.
Behind and to the right of the camera was the large agricultural building where bales of hay were stored, giving the area the name of 'The Stackyard'.
For many years an ancient baling machine was stored in this building - an enormous wooden contraption of the type now seen at steam rallies with lovingly preserved and gleaming traction engines attached to them, demonstrating farm practices of long ago.
It all seems so settled and secure but evidence that change was coming can be seen in the shape of the conical bonfire on the right of the picture made up of  beams and lengths of wood from the old farmyard buildings which were soon to disappear to make way for the new King Street/Kinderton Street junction.
Posted by SALT TOWN PRODUCTIONS at Wednesday, January 18, 2012