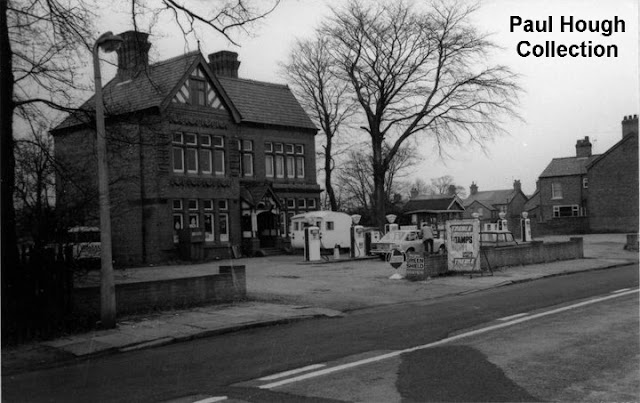 Nantwich Road in the 1960s (or possibly early 1970s) and treble Green Shield Stamps are being given away with petrol at 'The Woodlands', situated where, in modern-day Middlewich, we find Glastonbury Drive, Malmesbury Close, Lindisfarne Close, Tewkesbury Close, Fountains Close, Westminster Close, Welbeck Close and Buckfast Way, all modern developments built mostly on the site of the former Boosey's Nurseries as mentioned here.
Glastonbury Drive is the main estate road, off which the others branch and replaces the access road running alongside the houses on the far right of the picture. Malmesbury Close, which is the first road to branch off it to the left, runs parallel to Nantwich Road, approximately where the line of petrol pumps is in our picture.
Lurking alongside the building, on the left, is what looks very much like a breakdown truck.
Fortunately for the modern day motorist's peace of mind, this picture was taken long before  large signs stating the price per litre of the petrol on sale came into vogue, so we'll never know just how heartbreakingly cheap it was at the time*
* Not so, regrettably. Ignorance is bliss, but Geraldine Williams spills the beans below.
The ubiquitous squeaky Castrol sign is, however, present and correct.
The Woodlands was one of my earliest memories, for the very good reason that it stood directly opposite my home at 53 Nantwich Road.
Despite that, I find I know surprisingly little about it.

But here, riding to the rescue, comes Geraldine Williams:

'...The Woodlands used to be a guest house/hotel and was also used to billet American officers during the American occupation of Cranage(!) and the filling station was always known as Blease's.
My Dad used to top up our car with petrol there - four shots and four gallons for £1. The shots were (apparently) REDeX - an upper cylinder lubricant which was pumped into the petrol tank when filling up with a corresponding number of gallons of fuel and allegedly made the pistons work more smoothly.

(REDeX is still very much with us, and a source of endless discussion among motoring enthusiasts, who will spend  hours discussing its pros and cons﻿ rather than talking about sensible  things such as the relative merits of the Sony ECM 99 mike and the smaller F99A for field recording work, as normal people do -Ed)
Joan Pierpoint used to hold ballroom dancing classes (which I attended) in the big left-hand front room, and I owe all my Foxtrot skills to her. Ha ha!'

Geraldine Williams  Yes, I think it did.

I was delighted to receive additional information on this entry from no less a person than Denis Yardley - a name I remember well from my childhood. Denis' comments are featured below. - Ed
Posted by SALT TOWN PRODUCTIONS at Wednesday, January 25, 2012