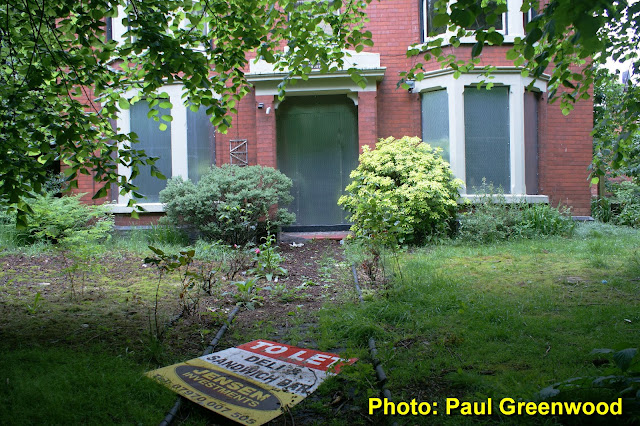 A crying shame. Paul Greenwood's photograph shows us Barclay House on the lower part of Southway, close to the shops on the approach to the Tesco Supermarket.
This once beautiful house and garden has fallen victim to planning blight, as have all the properties between Southway and Darlington Street, pending a decision by Tesco on what they plan to do with their existing store and the land they have acquired for its enlargement.
Barclay House is a particularly sad loss. It's a true Victorian gem retaining, as the estate agents would say, many original features including beautiful stained glass in the doorway, now hidden away behind ugly steel shutters designed to keep vandals  away.
That 'To Let' sign by the way, does not refer to Barclay House, but to a 'Deli & Sandwich Bar' - presumably the one in Wheelock Street owned by Johnny McAlinden until his recent untimely death,
It's not clear whether Barclay House will be available to let, although other property in the area has been, indicating that an announcement by Tesco on what they propose to do with the land may not be imminent.

We're grateful to Amy Murray for permission to use her photos of the demolition.


The end of Barclay House was long, drawn-out and heartbreaking. After many years of dereliction and decay work began on clearing the whole site early in 2020. Progress was very slow and ground to a complete halt when the Covid-19 outbreak meant that work on all such sites was suspended for several weeks.
Finally, on the 21st May,  the long-awaited bulldozers moved in.
Although Barclay House took its name from the fact that it was the residence of the manager of the nearby bank, we're told that the house actually predated the bank itself.

Facebook Feedback:
Editor's Note: The plight of poor old Barclay House struck a chord with many. It seems to have been everyone's dream house (including mine) over the years and to see it in such reduced circumstances is like seeing an old friend in trouble. Below is the feedback generated by the Facebook link to this entry:

Dave Roberts Yes. I've always loved the look of it, and I know many others have too. It's such a pity to see it as it is now.

Kath Walklate We used to come out of the pictures, which cost ninepence, and get a sixpenny mixed (chips and peas) and walk up 'picture alley'.

Geraldine Williams And everyone used to call at the little sweet shop just to the right of Southway to stock up before the film started! Was the proprietor a Mrs Atkinson?

Kath Walklate I'm not sure, Geraldine. I only recall Torchy. You didn't dare make a noise or he would throw you out!

Geraldine Williams I didn't know about Torchy, but I think he was mentioned in a Diary entry about Southway and how the kids tried to get into the cinema by the rear door and so avoid paying. He sounds like quite a character! Was he from Middlewich, and does anyone know his real name?

Kath Walklate I'll ask my older sister. She might know.

Susan Nugent I remember little Nora and her husband Arthur living in Barclay House. She might have been small, but you never crossed her! She was a good laugh when she worked at the Lily Works!

Geraldine Williams Yes, I remember Little Nora. I wonder what the history of the house is? You'd assume it was originally built for the Bank Manager at Barclays, but the name might just be a coincidence.

Gemma Blower I cannot believe you've featured this! I went past the other day and saw this house for the first time, and it's bugging me who owned it and why they're not doing anything with it. It's a beautiful house!

Wendy Johnson We went in one day when we were considering buying a choccy labrador. A lovely old house. What a shame it will be bulldozed to make way for Tesco!

Rachel Humphreys I totally agree, Wendy. Such a shame. And I bet the owners weren't so happy about the location of the current Tesco supermarket when it was first built. A beautiful house.

Michelle Woodcock I have always loved that house. A proper double-fronted dolls house! It's a disgrace to bulldoze such a beauty.

First published 27th June 2012. Updated and republished 21st May 2020, the day that Barclay House finally fell to the bulldozers.