What price a little bit of Middlewich railway history?

This token for the single-line section of railway between Middlewich and Northwich was sold at auction in Stafford in May 2016.

What was it for?

The tokens were locked into machines at Middlewich and Northwich (Sandbach Junction) signal-boxes, and the machines connected together (or 'interlocked') to ensure that if a token was being taken out at Middlewich, the ones at Northwich were locked in so that none could be removed, and vice versa.

The system also, of course, ensured that only one token at a time could be issued. So it was basically a case of 'no token, no journey'.

In practice the tokens were carried in pouches, attached to large  hoops, to enable drivers and signalmen to easily exchange tokens.

The link below contains a picture showing the Northwich-Middlewich token being handed over at Middlewich signal box. 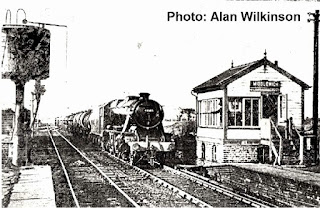 There were (and in some places still are) several different systems, involving tokens, key tokens, tablets, staffs etc.

The illustration above shows the closest machine I could find to the type I remember being in Middlewich signal box fifty or so years ago, and the tokens do resemble the Middlewich-Northwich one in our main picture.

However, it's possible that this machine is of a different type to the ones used on the Middlewich line.

My purpose is just to show the general principle.

So what price this Middlewich-Northwich token of railway days past?

We know it's from British Rail (or British Railways) days and we know it can't have been used after 1980, as that's when the signal box closed and new colour light signals (themselves since replaced) were installed.

What would you pay?


We're grateful to Vince Chadwick, who is a signalman on the Churnet Valley Railway for this additional information, and his permission to include it here - Ed.


That's a Tyers Token machine and the token is a type that would be used with that machine. I'm a volunteer signalman on the Churnet Valley Railway in Consall signalbox and I have a machine exactly like that in the signalbox to control the single-line section to Leekbrook Junction.
The token not only ensures one train at a time in the section, it is also used by the signalman to set the points and signals to allow trains to proceed or not - those are interlocked electrically with the Tyers machine. So if a token is already 'out' for the section not only can you not issue another one to another train, you also cannot set the points and signals to allow another train into the section. And if there's a siding off the single line that the token controls, its point will be mechanically locked and can only be unlocked using the token, so the crew of any train in the section know that no-one but them can change that point.