A NEW MAYOR FOR MIDDLEWICH - TWENTY EIGHT YEARS ON...

Monday 18th May 2020 is a historic day for the town of Middlewich.

Tonight the Town Council, for the first time in its forty-six year history. will be meeting, not in the Victoria Hall, or the Wych Centre, or even the Council Chamber in the Victoria Building, but online.

The change has been brought about by the need for 'social-distancing' because of the current Covid 19 outbreak. Many town, borough and county councils are doing the same thing with, as the old phrase has it, necessity being the mother of invention.

One of the items on tonight's agenda is the annual appointment of the Chairman of The Town Council, successor to Russell Watkinson, the current Chairman.

In previous years the Council Chairman has taken on the role of 'Mayor of Middlewich' the terms 'Mayor' and 'Chairman' being, for most purposes, interchangeable.

Last year, as is well known, this all changed with the council's introduction of a 'Community Mayor' to act as the town's First Citizen and take on the ceremonial role previously carried out by the Chairman.

As is also well known things didn't quite work out as they should have done and the 'Community Mayor Project' is currently suspended, with the council seemingly still determined to make a success of what is, when all's said and done, still a brilliant idea.

This then, is the state of play on this 18th of May.

But we thought this might be an opportune moment to travel back in time no less than twenty-eight years to the 18th May 1992, when our old friend Peter Cox, well-known supporter of the Rail Link Campaign and founder member of the original Folk & Boat Festival among many other good causes in Middlewich was installed as Mayor of Middlewich,as successor to Gerard Devaney. Peter was proposed by Cllr Colin Barrass and seconded by Cllr Dot Roberts.

And the 18th May is also special because it's the birthday of our late, and still very much missed, Town Clerk, Jonathan Williams, who sadly passed away last September.

It's worth noting that Peter acknowledged the fact that his inauguration occurred on Jonathan's thirtieth birthday by including this note in his speech:

'...at this point I would like to say that it is a special day for our Town Clerk. It's the day when he leaves his twenties behind him. I would like him to receive these token gifts in appreciation for the work he does.'

Note: What those token gifts were is not recorded, but we're sure that Peter will let us know in due course. 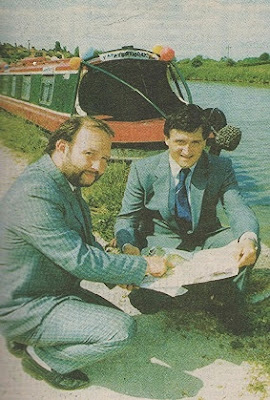 Peter Cox and the then thirty-year old Jonathan Williams pictured together on the occasion of the launch of the Middlewich Waterside Trail on the 27th May 1992.
(Photo: Peter Cox/Middlewich Chronicle)

Peter made a complete record of his year as Mayor of Middlewich and we are grateful to him for allowing us access to it. It's a treasure-trove of information on just what was going on in Middlewich twenty-eight years ago and on the amazing amount of things that a committed and hard-working Town Mayor can expect to get involved with during his, or her, term of office. We look forward to many more glimpses into this invaluable archive.

Sadly, Peter hasn't been too well recently and we're sure that everyone will want to join with us in wishing him a speedy return to good health.