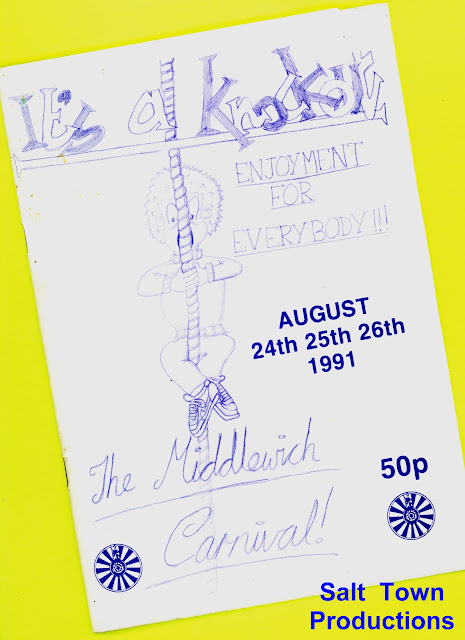 It's widely assumed that when the original Middlewich Folk & Boat Festival came on the scene in 1990  the Middlewich Carnival, at that time organised by Middlewich Round Table, disappeared.
This surviving programme from 1991 shows that the Carnival carried on for at least one more year.
Does anyone remember if this was the last Middlewich Carnival of all?
The cover is the result of a competition organised by the Round Table and was designed by a pupil of St Mary's RC School. Unfortunately, although this information was given in the programme itself, the name of the winning artist was not. It would be interesting to know the name of that pupil.
The method of printing (and the programme has all the hallmarks of being the work of J&M Print) used for the cover - blue on a glossy white background - has made it difficult to reproduce here.
The discovery of this booklet has allowed us to add to our ever-growing collection of Middlewich trade advertisements, possibly the most poignant of them all being this one: 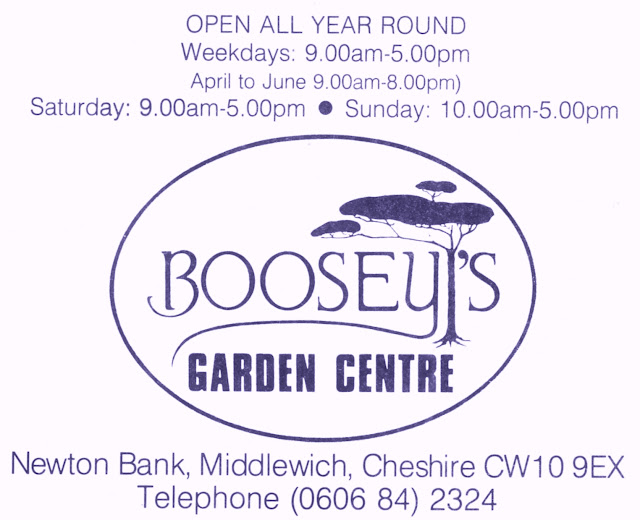 We've also been able to record something else for posterity - Boosey's opening hours, seasonally adjusted to take advantage of lighter nights between April and June.
Note also that early version of Middlewich's STD code, before the '1' was added and six figure numbers starting with '73' and '83' introduced.
There are also many other adverts in the programme, which we're dying to - and will - show you here on the Middlewich Diary. They include: Albert Atkinson (video - audio sales & service, Wheelock Street), G Dickinson and N G Stott (Dispensing chemists of Wheelock Street and Lewin Street - now both branches of Rowlands) Middlewich Fire & Heat Centre (Town Bridge, now an estate agents), Powell's ('quality menswear for the discerning man'), JJ Skellon Ltd (stockists of Clarks, K. Shoes, and Lotus), Knights & Dames, Wheelock Street ('night-time Kebab House, day-time Cafe'), R&H Taylor, 9 Wheelock Street (Newsagent & Tobacconist), Barber's (Tel 2537/2328 For Fresh Fruit, Vegetables and Fish), Fred Cash Ltd (Directors A Platt, A E Platt), R. A Devaney (Pallets) and many more.
We will, of course,  be returning to this particular programme many times to show you some of these advertisements and the rest of the programme, including the welcome from the then Round Table Chairman Derek Davies, and the message from Town Mayor Gerard Devaney.
For now though, we'll leave you with this page, showing the route of the carnival procession on that 24th August. twenty-one years ago: 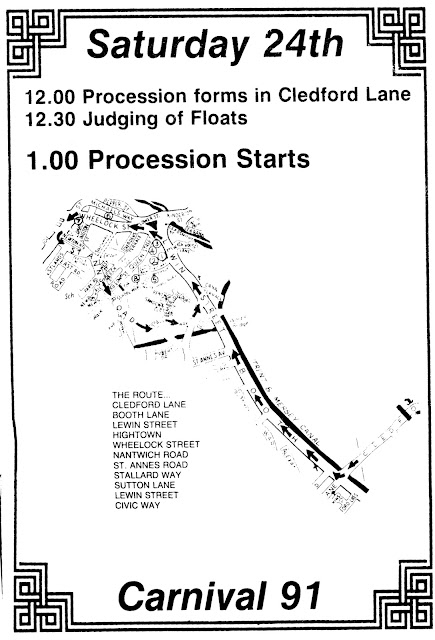 I think it was the last one. I recall a Round Table 'delegation' tried to persuade us to move the Folk & Boat Festival to August to include the Carnival. I tried to convince them to keep the Carnival going as it was, but members just didn't have the time and numbers to continue it.
And if 1991 was the year it was held on a field down Croxton Lane (alongside the Dane before the bridge) we - i.e. The Cats Bar - won the team 'It's A Knockout'! DT

(the procession route (above), seems to indicate that this particular Carnival was held on Market Field - Ed.)
Posted by SALT TOWN PRODUCTIONS at Sunday, July 29, 2012