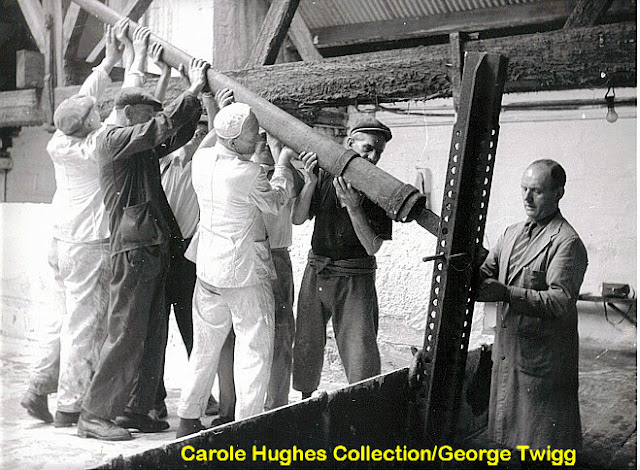 by Dave Roberts
This photograph is included in Carole Hughes' collection of Middlewich photographs and also appears on page 38 of Wych & Water by Tim Malim and George Nash (Middlewich Vision Canal & Salt Town Project 2009) where it is attributed to George Twigg, an expert on the Mid-Cheshire salt and chemical industries.
The metal pans used in traditional salt making were, as can be imagined, subject to a lot of  wear and tear due  to the corrosive nature of the very strong brine solution used to produce salt, the constant raking and skimming action of the lumpmen, the effect of the intense heat and, of course, the descaling which had to take place very frequently.
Salt pans, in accordance with common engineering practice during the open pan era, were of riveted construction and repairs to the pans often involved replacing broken rivets.
Sometimes parts of the pan wore so thin that patches had to be inserted to strengthen them, and these too were riveted to the original metal.
Rivets (referred to in a peculiar Middlewich dialect inversion as 'revits') were heated on the spot,  placed in position underneath the pan by 'rivet-runners' (or 'revit-runners') and hammered flat from within the pan by the riveter and his mate.
Obviously before any of this could happen the pan itself needed to be raised, and that's what the gentlemen in the photograph are doing, with the aid of a 'jigger', a kind of giant lever mechanism. The salt pans themselves had rings built into them so that they could be connected to pulleys and raised.

Incidentally Leadsmithy Street, where the present day Waters Edge Medical Centre is situated, gets its name from the use of lead pans for salt-making, in the days before iron and steel could be produced economically. 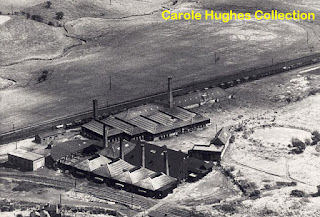