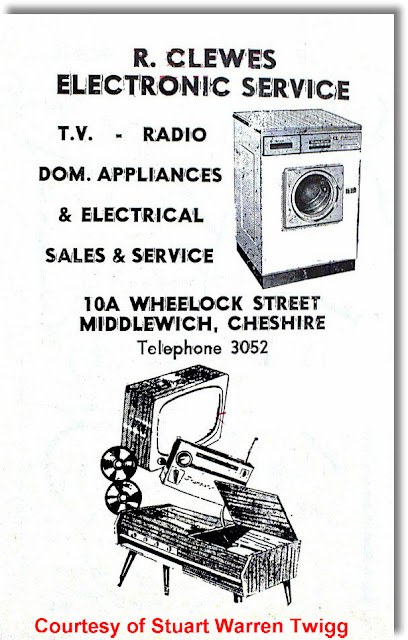 by Dave Roberts
Here's another of the advertisements which Stuart found in a 1978 diary. It naturally  follows on from this one because, as Stuart says, R Clewes Electronic Service was 'obviously next door to Kath's Cafe (which was no 10B) but I don't remember it'.
Neither do I, actually, but it must have taken over the premises from Johnson's the Cleaners at some stage. As we've pointed out in previous diary entries, these two shops seem to have been home to all kinds of businesses before both settling down to become hairdressers shops.
Let's make one thing clear before we go on: 'Dom. appliances' in this context is an abbreviation of 'Domestic appliances' - washing machines, tumble dryers etc. We wouldn't want anyone to get the wrong idea...
Stuart has also pointed out that this shop would have been in competition at the time with Douglas Williams & Co, ably managed by his grandfather Harry Jackson.
It would also have had Harold Woodbine Electrical (by this time at 28 Hightown and now operating from Sandbach) to contend with (although the retail side of Woodbine's may have closed by then - does anyone know?) and this was probably why the enterprise was so short lived.
R Clewes' ad is set in the same smudgy type as the one for Kath's Cafe, but includes some of those 'stock pictures' so prevalent in adverts of the time.
These little  illustrations cropped up everywhere, in the same way that 'clip art' does in the current computer age.
They were drawn by what used to be called 'commercial artists', and my late brother Glynn was one of them.
He studied at the College of Art in London Road, Northwich, and later in Manchester (where he was 'in digs' as they used to say, with Manchester United's Denis Law).
He spent some time at the graphics department of Granada TV (in those far-off days when they proudly proclaimed themselves to be 'from the North') and put together programme captions for such long lost programmes as 'Scene At Six Thirty' using art card, letraset and cow gum.
Glynn's main claim to fame, though, was designing the logo and signage for Harold Penk,the Crewe bookmakers. It was still in use until quite recently; a stylised 'P' in the shape of a winning post.
The stock images used in Clewes' advert are a little anachronistic for 1978, a reflection of how long the plates must have been in use at the printers.
The washing machine looks OK. You can imagine using one of them in the late 1970s.
But just look at that TV set. It's the sort that was in use in the early 1960s when you had a choice of BBC TV or Granada TV (from the North, naturally).
Colour TV had been around for eleven years in 1978 and sets were much more sophisticated than the one in the illustration appears to be.
The transistor radio could pass muster as a 1970s model, but beneath that is that status symbol of the 50s and 60s, a radiogram.
Such contrivances had, by 1978, been ousted by the Music Centre, then thought to be the ultimate in entertainment systems.
And those round discs, children, are not CDs but vinyl records (they might even be 78s).
But never mind all that; does anyone know who R Clewes was and what happened to his electrical business?

Geraldine Williams We have to slot Pimlott's Fashions into the timeline for those two shops (I think it pre-dates Kath's Cafe). Their main business was on High Street, Winsford. There were quite a few Clewes' in Middlewich. I remember a Gary attending St Mary's School. There is, of course, Roy Clewes who I think is now deeply involved with the United Reformed Church in Middlewich. He would be of the right age, but I doubt he would have any connections with this Electronic business. But who knows?! Roy married Margaret Robinson from Sutton Lane. The Robinsons were great friends of My Granny (nee Polly Gallimore of postcards collection fame!) so I knew Margaret very well.